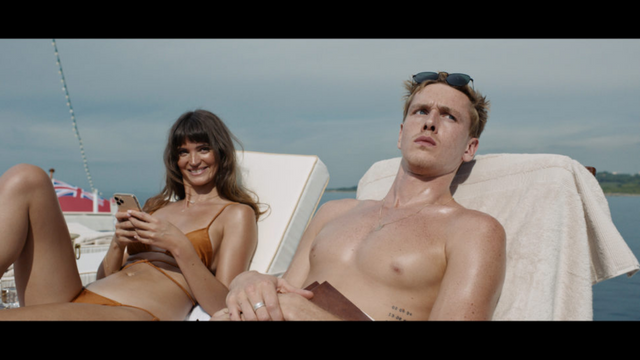 Triangle of Sadness generated a great deal of buzz in film festivals in 2022. Ruben Ostlund crafted a merciless satire of the rich and beautiful, but the closing of Triangle of Sadness left audiences with one enormous question: what happened to Yaya? During a press conference at the 2022 Cannes Film Festival, one of the performers delivered a firm answer to the issue with a very assured reaction.

What is the Explanation of the Triangle of Sadness Ending?

The guests and crew members that survived the explosion are Dmitry, Carl, Yaya, Yarmo, Therese, Paula, and Nelson, who worked in the engine room (Jean-Christophe Folly).

The next day, toilet manager Abigail arrives in a large lifeboat with water and extra goodies (Dolly de Leon). In the beginning, Paula commands her to distribute her snacks and water to everyone.

In the evening, though, Abigail, who caught the fish for dinner and built the fire herself, assumes leadership. “Who am I?” she inquires. Each participant must shout “Captain” in order to receive another little piece of fish.

Thus begins their island existence and everyday rituals. Carl and Nelson are first tasked with watching over Therese, while Yaya and Paula are let to sleep in the lifeboat with Abigail. Carl and Nelson find pretzel sticks in the backpack Abigail left behind and share them with Therese.

However, the next day, Abigail and the other ladies question them and reprimand them for eating them without sharing. Abigail receives Dmitry’s watches as a promise of wealth “after they return,” but Dmitry serves no other purpose besides guiding them with a lantern.

Just as Yaya’s appearance allowed her and Carl to sail for free on the yacht, Carl’s appearance allows him to have additional food and a pleasant place to sleep with Abigail, who specifically requests that he stay with her.

Initially, he consults Yaya to determine what he can and cannot do, but eventually, he becomes accustomed to staying with Abigail in exchange for goodies.

The gang looks to function well together as the days pass, but the men continue to be unemployed and without a true purpose on the island; at one point, they slaughter a female donkey to prove they can contribute to the community.

During a celebration of the men’s successful hunt, Carl and Abigail sit close to one another, much to Yaya’s displeasure. In a jealous rage, Yaya kisses Yarmo before leaving.

Later that evening, it is shown that Carl and Abigail indeed engage in a consenting sexual relationship, with Abigail “purchasing sex with the common meal.

They have difficulty deciding whether or not they want their relationship to be regarded as a couple in the public eye. Carl is unsure whether he should end his relationship with Yaya, and Abigail does not wish to interfere.

The following day, Yaya informs Abigail that she would be taking a stroll and exploring the island, and Abigail agrees to accompany her. During the walk, Yaya expresses her admiration for Abigail’s accomplishments on the island, including how she “managed to run a fucking matriarchy” and “domesticated all the elderly alpha males.”

Therese encounters a vendor selling designer handbags, revealing that the yacht residents are not the only ones on the island. This is quickly confirmed by Yaya, who shows Abigail the elevator to an island luxury resort.

The two embraces and Yaya thinks that they should leave, but Abigail refuses, stating that she has to urinate. Abigail must decide whether she wishes to return to her previous life or preserve her position as captain at this point.

She opts for the latter, grabs a rock, and moves carefully approaching Yaya, who offers her an assistant position. The picture transitions to an image of Carl jogging along the same path as Yaya and Abigail, presumably in an effort to locate them.