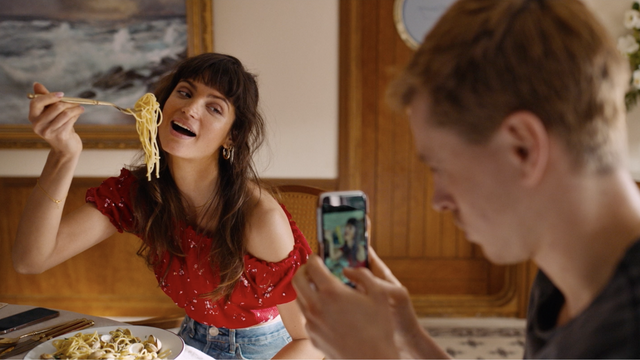 Ruben Ostlund is a daring director who is adept at using satire as a keen instrument to stab at his topic. Triangle of Sadness is no exception, as it represents his second Palme d’Or win at the Cannes Film Festival, following The Square in 2017.

Ostlund’s most recent examination of high society is particularly critical, yet it is viewed through a lens that is complemented by large laughs, high shock value, and a great deal of mayhem, for better or worse.

Triangle of Sadness is initially focused on the element of materialism. Carl is auditioning for a modeling job, but the requirements of the decision-makers seem unreasonable.

They criticize his gait, the length of time since his last modeling job, and his “triangle of grief” — the wrinkle that grows between the eyebrows. However, they recommend Botox as a solution, precisely encapsulating the milieu Ostlund immerses the viewer in.

From a distance, Carl and Yaya are the Instagram-perfect couple, but the fractures continue to a spiderweb. A dispute about who should pay for supper escalates into a larger discussion about gender roles.

They attempt to maintain their “sexiness” in both their private and public lives, resulting in envy. However, even their attendance on this vacation is a sham, as Yaya was invited due to her influencer status.

Paula (Vicki Berlin) is the crew’s leader, highlighting the film’s attitude toward materialism. It’s all about pleasing the “crazy” wealthy passengers, who are more interested in shooting images for social media influence than enjoying their trip.

However, these themes are not limited to the yacht; they extend to their isolation on the island. This time, a power grab shakes the hierarchy and the entire foundation upon which it stands.

Title cards are used by Ostlund to divide the Triangle of Sadness into three chapters. As the plot unfolds, the romance between Carl and Yaya stays in the foreground, but the ensemble satire grows more prevalent.

In all three portions, social politics play a role, but he explores power systems. The destruction of the wealthy is a fascinating trip, but the third act is overlong. You will definitely notice the lengthened duration.

Each section contains a wide spectrum of humor, ranging from smart wit to shocking potty jokes. Despite this, Triangle of Sadness is not recommended for anyone who is squeamish of bodily functions, as the film’s ads make quite apparent. Ostlund takes bold risks, but not all of them pay off, including some of the relationships that develop on the island.

Ostlund delivers an entertaining cast to the big screen, but two actors stand out. Dean’s portrayal of Yaya is easy, deftly balancing the character’s romantic troubles with satirical humor about influencer culture. In addition, Dolly De Leon as Abigail steals the show in the third chapter with her nuanced performance.

Triangle of Sadness’s message about excess is as subtle as a sledgehammer, yet the film is an utter riot. It addresses the characters’ pretentiousness with a mixture of pomposity and adolescent vulgarity that won’t appeal to all audiences, but for those who allow themselves to get swept up by its waves, it’s incredible fun.