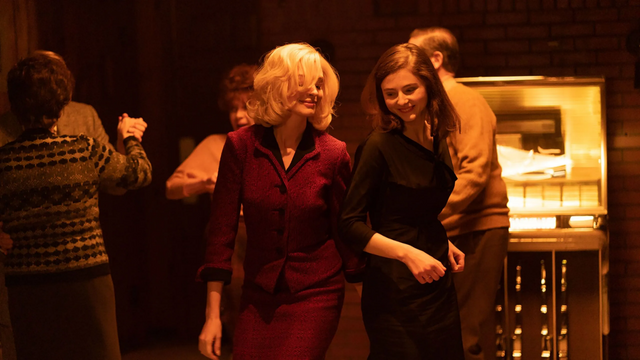 A psychopath would view William Oldroyd’s deliciously insane “Eileen,” based on the novel by Ottessa Moshfegh, as a story of personal empowerment. In fact, Eileen (Thomasin McKenzie) transforms from a dowdy, dejected, habitual masturbator in the opening few minutes of the film to an independent young woman of definite action and agency, facing her future with a fur coat and a smile.

Non-psychos, on the other hand, will have a more complex array of responses to Oldroyd’s audacious genre-bending: a mixture of panic, delight, disgust, astonishment, and terrified, probably inappropriate laughing. It may prove to be an off-putting concoction for some, but the oddballs among us will find “Eileen’s” sheer audacity, couched as it is in elegant, astute cinema, to be oddly thrilling and irresistible.

Eileen’s father (a normally superb Shea Whigham) may be an unrepentantly alcoholic former police officer, prone to lounging at an upstairs window and pointing his rifle at neighborhood children on their way home from school when inebriated, but he has his moments. During one of these, with the relative clarity of a seasoned drinker on his first whisky of the day, he reveals a potential clue for navigating the film’s narrative chicanes.

As in the movies, there are two categories of individuals in the real world, according to his opinion: “the ones making moves, the ones you watch,” and “the ones merely filling space.”

He declares, with a casual harshness typical of even their most intimate interactions, that his daughter is in the latter group. But what happens when a lifetime space-filler, to whom no one has ever paid any attention, and whose idiosyncrasies have thus grown into full-fledged perversions without anyone noticing, chooses to become a move-maker all of a sudden? Perhaps “Eileen” is what occurs when an unappreciated background player assumes the lead part in her own life.

Such a profound change requires a spark. It arrives in the Marilyn-esque form of “Dr. Miss Rebecca St. John” (Anne Hathaway), the facility’s improbably attractive new prison psychologist, for Eileen, the sneaky, socially distant, and very hygiene-averse secretary at a boy’s penitentiary in 1960s Massachusetts.

Rebecca is as exotic as a bird of paradise in Eileen’s dreary setting, with her click-clacking shoes, thin smokes, and a flawless scoop of blonde hair.

And when she makes the effort to befriend Eileen, the effect is immediate: Eileen begins to wash more frequently and wear makeup, replacing her shapeless beige attire with feminine dresses and powder-pink outerwear from her mother’s closet. “You’re different these days,” her father notes with a sigh. “Very nearly intriguing.”

Oldroyd replaces the velvety warmth of Haynes’ film with a shabby, tawdry, icy edge, evident in everything from the production design to Ari Wegner’s superbly vigilant camerawork. Here, the New England winter is not something to be viewed through a picture window while sipping hot chocolate, but an icy, perilous thing — especially if you need to drive through it with the windows down because your old, rattling automobile fills with smoke otherwise. Long before the relationship takes its first spiraling tumble into psychological and ethical muck, if this is “Carol,” it is a cursed, twisted version of it from the start.

Under the twitchy brushed cymbals of Richard Reed Parry’s outstanding jazz music, which manages to be both seductive and impatient as it goes from dissonant parts to sweetly melodic resolutions, Rebecca begins to take an interest in one of the prison’s prisoners. Leo Polk (Sam Nivola) is incarcerated for stabbing his father to death while he was in bed with his mother (Marin Ireland, whose harrowing monologue here is her second great Sundance moment this year, following “Birth/Rebirth”).

Eileen is also intrigued by the youngster, whose heinous crime seems to fuel her own patricidal fantasies. In stark opposition to Rebecca’s flimsy claim that Massachusetts is a state with “no fantasy, no imagination,” Eileen daydreams wildly in sequences that Oldroyd purposefully films and edits to appear as though they are actually occurring.

Rebecca’s inquiry into Polk’s case takes a nasty and frankly unprofessional turn, and she enlists Eileen’s assistance, not realizing that the squeaky-voiced creature she befriended is far from the innocent and compliant tool she assumed her to be. Part of the joy of “Eileen” is the blackly hilarious shift in the power dynamic between the two women, which Hathaway and McKenzie play with career-best performances.

Eileen, who was originally enticed into the spotlight by Rebecca’s flattering attention, eventually comes into her own and begins to supplant even the brilliant object of her fixation — love is not quite the appropriate word — as the film’s gravitational core.

Certainly, she can outdo Rebecca in terms of twisted psychology, and it may be Rebecca’s punishment for all the small condescending remarks and her unwavering conviction in her own magnetism that she will shrink as Eileen grows. By the conclusion, it’s almost as though Rebecca realizes she is, for the first time, the filler in a picture starring someone else.

This picture is virtually intoxicated with cinematic potential, pushing crazily modern energy through a variety of traditional Hollywood genres. Despite being adapted from the novel by the author and co-writer Luke Goebel (they previously collaborated on the much simpler Jennifer Lawrence drama “Causeway”), “Eileen” is deliriously movie-literate.

It goes, sometimes sinuously, sometimes abruptly, from Sirkian romantic melodrama to film noir to black-comedy horror, settling somewhere in the realms of one of Hitchcock’s more twisted thrillers. Rebecca’s name and her aloof blonde demeanor are also nodded to the Master of Suspense.

The stylistic rigor that made Oldroyd’s “Lady Macbeth” such a startling debut is present throughout “Eileen,” but this time it is applied to a narrative of audacious, even gaudy ambition, which “Eileen” conceals, along with its disordered heart, beneath a controlled, tranquil veneer. In this respect, it resembles its fantastically odd protagonist. Always the quiet ones are chosen.