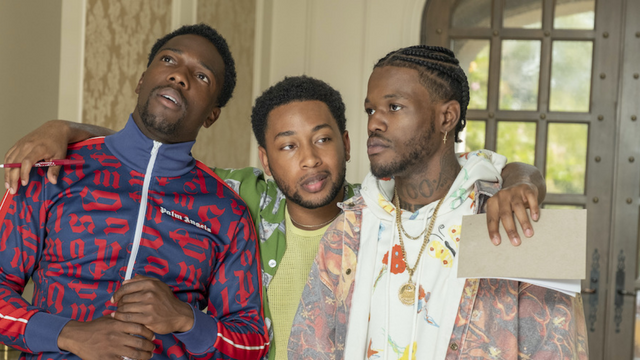 The 1990 bubblegum hip-hop comedy “House Party,” starring Kid ‘n Play (a.k.a. Christopher Reid with his fez-shaped fade and Christopher Martin with his wicked putdowns), captured the zeitgeist and impacted a great deal of what followed.

It opened in March 1990 and helped usher in the spirit of the ’90s – something at once edgy and optimistic, imbued with a rebellious bravado designed to conquer.

Hip-hop had been on the rise for a decade, and by the late 1980s, N.W.A. and Public Enemy had imbued it with a menacing new depth of power. Spike Lee released “Do the Right Thing” in the summer of 1989, and the film, with its fight-the-power theme, was, of course, a Black cinematic apotheosis infused with equal parts exhilaration and anguish.

“House Party” was a raunchy, high-energy New Line comedy that was, in many ways, reminiscent of the John Hughes films like “Animal House.” Yet just as the Spike Lee revolution opened the door to films such as “Boyz n the Hood” and “Menace II Society,” “House Party” ushered in a new era of Hollywood that spawned comedies such as “Friday” that was funky, joyful slices of life. Kid ‘n Play, as dueling rappers, embodied the film’s spiky-yet-sophisticated, raunchy-yet-romantic tone.

The Hudlin brothers’ affectionately bombastic “House Party” highlighted the manner in which a fantastic party could appear to be everything. The film’s rapid-fire wit was an expression of sheer joy, which contributed to its enduring popularity.

The new version of “House Party” emerges at a time that could not be more dissimilar, and this is reflected in the film’s premise. Kevin (Jacob Latimore), a single father attempting to be responsible, and Damon (Tosin Cole), a loud-mouthed would-be party promoter pronouncing his name Da-MON (as if it were French), are both employed by a Los Angeles home-cleaning service.

They’re going to be fired for smoking a joint on the job, but after exploring the estate they’re tasked with cleaning, they find it’s LeBron James’s residence.

The trophy room, which displays an NBA championship ring as if it were one of the Crown Jewels, is a dead giveaway. LeBron is in India on a meditation retreat. So what if they used his apartment to host the ultimate party and advertised it on Instagram to attract celebs and everyone who wants to meet them?

As far as party fantasies go, this one has indisputable logic (and the potential for disaster), but what really stands out is that its objective is as avaricious as it is coldly ambitious. Visit LeBron’s home! Mix with the wealthy and famous! Pay a premium to enter! It’s both a party and a swindle, and while “House Party,” directed by music-video veteran Calmatic (it’s his debut feature), is aware of this, it doesn’t do much to make the swindling humorous.

Without necessarily examining what it all means, the film taps into the glamour ethos of the age of social media envy. Kid ‘n Play threw a memorable party, but the new film, much like Kevin and Damon themselves, simply follows the flow of the con.

The two major actors are charismatic, yet they fail to win you over like Kid ‘n Play. Jacob Latimore embodies the earnest Kevin a little too faithfully, and Tosin Cole is almost too diametrically his opposite — a hyperkinetic hustler with a new pitch every minute, though Cole’s performance, on its own slightly exhausting terms, is a feat, especially when you consider that this is the actor who summoned the gravitas to portray Medgar Evers in “Till.”

Vic, the DJ they hire, is portrayed by D.C. Young Fly, and it is this character that, in my opinion, exemplifies the film’s peculiar limitation: that it is simply not very humorous. Vic is an alcoholic who enjoys drinking from a bottle of Hennessy while spinning, and D.C. Young Fly is more than willing to portray him as a paranoid flake.

Perhaps he is wearing a T-shirt with the phrase “Comic Relief” However, the writing by Jamal Olori and Stephen Glover does not provide him with lines that spark and ignite.

There is a white geek neighbor (Andrew Santino) with a pet koala, a trio of hoodlums who arrive to disrupt things and an empowered fashion plate named Venus (Karen Obilom) who steals the film’s big dance number (set to the old-school groove of “This Is How We Do It”) Too much of this, though, lacks the zest that the picture often promises.

There are numerous famous cameos, including Mya, Snoop Dogg, Lil Wayne, and Lena Waithe, but the highlight of the film is Kid Cudi’s deliciously arrogant portrayal of himself. He has the timing and aura that the rest of the “House Party” is missing.

The original “House Party” remained grounded, whereas the current version goes purposely over the top in the last act, as if to give the audience their money’s worth.

Kevin and Damon end up accompanying Kid Cudi to an Illuminati meeting, which transforms the picture into “Eyes Wide Shut” on bad drugs. And this is before LeBron James arrives. He produced the film and is a good sport about teasing himself, but even if this “House Party” shoots the works, it never achieves the same success as the 1990 version. It never makes us desire to join the celebration.