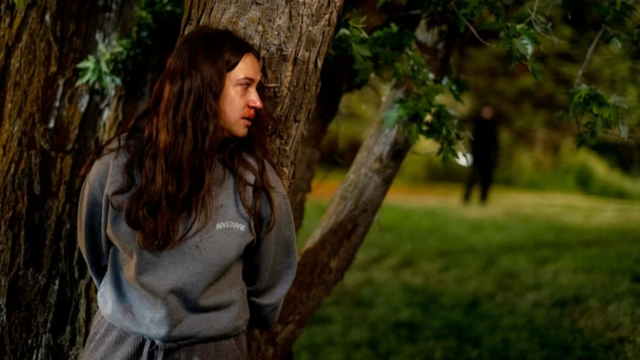 Tyler, a regular twenty-something, is grocery shopping in the early days of the COVID pandemic when tensions are high and resources are scarce. He receives regular stalkerish text messages for slasher films and ignored them. A black-clad stranger interrupts his habit of cleaning his goods with Lysol at home. Tyler’s neck is sliced following a lengthy pursuit through his flat. Pretty usual fare for a horror film.

Parker (Gideon Adlon) and Miri (Bethlehem Million) are traveling to Parker’s family’s luxurious lakeside estate to quarantine in style. DJ (Dylan Sprayberry), who had been casually dating Parker, discovered her on social media and decided to come to find her, thus derailing their plans. The girls take pity on him for driving so far and allow him to spend the night. The killer then arrives, and the slashing begins with them as well.

Sick is a very typical slasher film until the third act, and while it takes a while to get there, and getting there requires a bit of patience, Sick is at its most engaging in the last half.

For instance, it seems to take Tyler a very long time to die, and when he eventually dies, it is unclear why he is included in the plot. Towards the end of the film, the reason for his killing is finally disclosed, but the decision to withhold these answers later was still too drawn out to be effective, and the kill itself is not particularly interesting.

John Hyams, who has directed numerous horror films and television series like Chucky and Black Summer, is competent and does a nice job with this straightforward slasher tale. He understands where to situate the killer in the background to make them appear menacing, how to set up an effective jump scare, and when to deceive the audience.

With a script by Scream author Kevin Williamson, one would anticipate a bit more humor in Sick. The scenes of Miri continuously telling her companions to put on masks, or spraying Lysol into the air like an air freshener, and wiping down groceries are efforts at pandemic comedy, but not enough time has gone for them to be particularly humorous at this point in time. Doesn’t tragedy + time equal comedy? However, one attempt at pandemic comedy is successful, when Parker is fleeing the killer and attempting to be rescued by a motorist who refuses to let her into his car without a mask.

As long as you have the patience to get there, Sick is a decent slasher that hits all the right notes, has some terrific shocks and brutal killings, and has a fresh perspective on the slasher story. Given that this was written by the author of Scream, it is difficult not to expect a bit more.