Shotgun Wedding Review: The Movie is Laugh Out Loud Funny, With Humorous and Thrilling Action 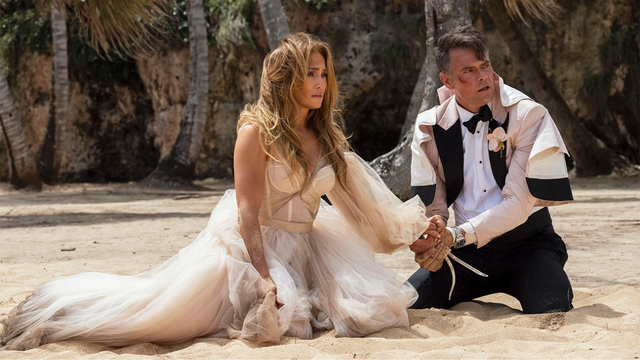 In the years following the Nora Ephron and Nancy Meyers era of romantic comedies, the genre of feel-good, sugary films has diminished. Jennifer Lopez’s latest, Shotgun Wedding, aims to keep romantic comedy alive despite the fact that studios are creating fewer titles and the majority of films are available via streaming.

After establishing herself as the undisputed queen of romantic comedies in the early 2000s, the multitalented actress is back for another round, this time with Josh Duhamel, and fans should take the plunge into this raucous vacation that will sweep you off your feet.

While no film genre has ever been more lauded and criticized than a romantic comedy, Lopez manages to make this destination wedding entertaining by providing the exact escape we anticipate from these types of films.

The premise may appear foolish or implausible and suffer from pace flaws, yet it is precisely what makes this such a lovely and welcoming getaway. In its 100 minutes of matrimonial madness, directed by Pitch Perfect’s Jason Moore and written by 2014’s Two Night Stand’s Mark Hammer, Shotgun Wedding plays to more than just romance and wedding pranks. In a number of aspects, it is also a buddy comedy that caters to the masculine audience yearning for action.

Shotgun Wedding depicts Darcy Rivera (Lopez) and Tom Fowler (Duhamel) inviting all of their friends and family to the destination wedding of their dreams. The couple gives new meaning to the traditional wedding vow “till death do us part.” Tom has become a “groomzilla” and is obsessed with spray-painted pineapples, whilst Darcy wants something simple.

This exact reversal of gender roles makes Shotgun Wedding a little different take on the classic romantic comedy, which infuses the couple’s interactions with wit and authenticity.

When a trio of pirates invade the party and take everyone hostage, save for the missing bride and groom, they receive more than they bargained for.

As anarchy erupts and a series of bizarre events unfold, Tom and Darcy’s problems are enough to make any couple want to separate. Instead, the engaged couple works together in the most perilous situation of their lives to save their families and friends on the tropical island, while remembering why they fell in love in the first place.

With pirates threatening their loved ones, there is a long list of misfortunes in which they find themselves, including explosions from loose explosives, gun battles, and tonnes of murder – enough to cause Darcy to faint more than once.

Shotgun Wedding works despite its abundance of cliched rom-com tropes and humorous oddities that could be found in a Tim Robinson joke. However, Duhamel is ideal in this role as the devoted groom, whose neuroticisms read like words written for Reynolds. Duhamel, bringing his own punch and personality to the film, creates an allure unlike any of his prior portrayals.

Regarding Lopez, you have to give her credit for knowing her brand and working it to the letter. Though she has the genuine acting ability and lends relatability to every role, her rom-com stands out in a lengthy, legendary filmography.

Being infectiously humorous and affably adorable is a component of her identity in previous flicks, but in this one, she amplifies her magnetism through the film’s hilarious and frequently quirky action sequences. Her character Darcy may appear frightened and faint at the sight of blood, yet she creates a strong protagonist who is truly her own person.

Some may argue that the couple lacks chemistry, however, this is more likely due to their characters’ initial disconnection in their sentiments about the wedding. This fractured relationship is particularly successful during action sequences in which the characters work together, as well as in quieter moments when they are vulnerable with one another.

Despite the shift in Tom’s casting, Duhamel manages to match Lopez’s on-screen charisma, proving he is a capable opponent and sparring partner for the megastar.

The pair is supported by an astoundingly eclectic cast that complements the chaotic themes of the picture. Their chemistry makes it simpler to enjoy and laugh along with the film. With Jennifer Coolidge leading the supporting cast, she is every bit as entertaining as you could expect, as she not only shields the hostages but also fires an assault rifle and transforms into the most wonderfully deranged persona imaginable. Coolidge is also joined by Cheech Marin, Sonia Braga, Lenny Kravitz, and D’Arcy Carden, who is a cinematic presence that cannot be ignored.

Shotgun Wedding is actually funny and a superb entry in the romantic comedy genre of 2023, as seen by its good comedy sequences and moments that will make you laugh out loud and its touching parts that will make you cry. It has a few pacing flaws and is predictable from the get-go, but by rom-com standards, it’s still a naturally easy-breezy film that transports viewers to the pleasantly sweet and well-balanced temple of Lopez’s early contributions to the genre.

Shotgun Wedding balances romance with comedy and a great deal of delightful action, and despite a few hiccups, provides precisely what is required to make this a pleasant, feel-good film for 2023.