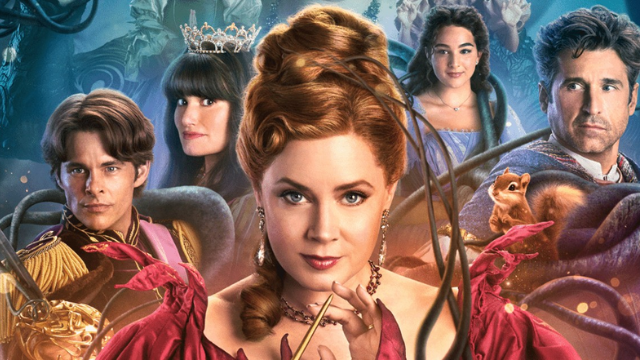 “Enchanted,” the 2007 Disney musical comedy in which Amy Adams played a goody-two-shoes princess exiled from her fairy-tale animated kingdom and transported to the live-action world of New York City, was one of the last really good fish-out-of-water comedies — a genre that was popularised in the ’80s by films like “Splash” and “Back to the Future” and “‘Crocodile’ Dundee,” but which eventually lost its The beauty of “Enchanted” is that it is a Disney children’s film that satirizes everything people adore about Disney children’s films.

Adams’ Giselle, who had cartoon birds flying around her and was constantly breaking into song, was too pure to be real, but that was her charm, her little absurd delight. The film found a way to have its G-rated princess cake and eat it, as well.

The film made a sort of valiant last stand for the concept of pure-hearted femininity. But it wasn’t until I saw “Disenchanted,” the sequel to “Enchanted” that will be released 15 years later (exclusively on Disney+), that I realized how out of style this sort of stuff has become.

The current trend is regal nose-in-the-air haughtiness, a type of operatic nastiness that gained popularity about the time “Maleficent” was released (2014). And “Disenchanted,” which leaves charity largely on the shelf, delivers you a double serving.

In an attempt to regain their happily ever after, Giselle and her earthly Prince Charming, Robert (Patrick Dempsey), together with their daughter and Robert’s adolescent daughter from a previous marriage, Morgan (Gabriella Baldacchino), have migrated to the New York suburb of Monroeville (as so many urban-to-suburban transplants have tried to do).

They purchase a fixer-upper that resembles a little castle, but within days they are afflicted with suburban malaise. So, Giselle, seizing the Wand of Wishes gifted to Morgan by the visiting King and Queen of Andalasia (James Marsden and Idina Menzel, gamely reprising their roles), uses the wand to transform all of Monroeville into a fairytale kingdom: the medieval suburban village of Monrolasia, complete with flourishing flora and dancing citizens. This results in her putting a curse on herself. She now embodies the ideal of the mature cruel girl: the evil stepmother!

Malvina (Maya Rudolph), a control-freak socialite who is transformed into an evil queen, is another grown-up bad girl in town. Giselle, even in her altered state, isn’t only cruel.

Adams plays Giselle as though she is vacillating between identities, so that whenever Giselle utters a witty remark (typically along the lines of “I’m not conceited; I just look good in everything!”), she appears astonished at the phrase she just uttered, which Adams plays with delightful astonishment. Giselle and Malvina then engage in a competition to be the local Cruella de Vil, as their meanness begins to take control.

One must wonder, “Where is the fun in that?” The fish-out-of-water hook and Giselle’s identification as an exceedingly beautiful specimen of a defeated planet has disappeared. At points, “Disenchanted” resembles a cross between a child-friendly version of “Don’t Worry, Darling” and “Cinderella II: Return of the Evil Queen” in terms of its humor and fantasy.

At times, it is a light display looking for a movie. The picture has the fawning impersonality and bustling distorted logic of a metaverse, which is the true problem.

The songs by Alan Menken and Stephen Schwartz are forgettable; they are more Broadway-style than pop. And despite the fact that Adams, dressed in an electric blue dress with a peacock collar, acts appropriately liberated as the “bad” Giselle, it’s difficult to know who to root for.

Maya Rudolph is excellent at delivering expressions of what-the-hell snob incredulity, but you wish she had more to do. By the time Idina Menzel screams out the ballad “Love Power,” we realize that we could not be more in awe of her pipes and less immersed in “Disenchanted’s” silly, scattershot plot.