Trial by Fire Review: Fans Say It’s a Great Show Based on a Tragic Story 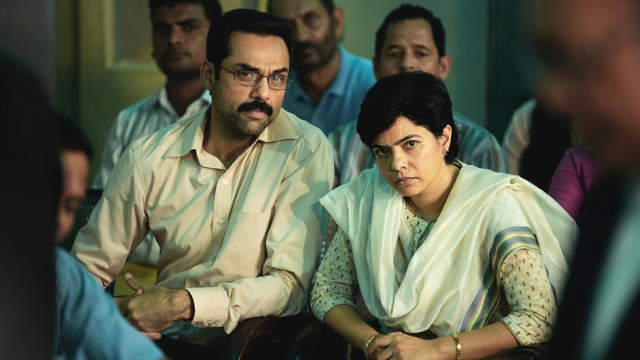 On the afternoon of June 13, 1997, a fire caused by a poorly maintained transformer broke out in Delhi’s Uphaar Cinema, silently fumigating a filled auditorium with carbon monoxide before plunging the place into darkness for the first time since the movie began showing.

Balcony doors had been padlocked from the outside to prevent late ingress, which was one of several code violations that blocked the path of those running for the exits. Nearly 60 moviegoers lost their lives, and more than 100 more were hurt.

One official says, “It wasn’t a cinema theatre, it was a cremation,” in the seven-part dramatization of the fire and its aftermath that is “Trial by Fire,” one of Netflix India’s greatest miniseries to date.

The film’s protagonists, played by Rajshri Deshpande and Abhay Deol, are a middle-class couple named Neelam and Shekhar Krishnamoorthy who are introduced when they send off their children, Ujjwal (Abhishek Sharrma) and Unnati (Poorti Jai Agarwal), to what would otherwise be a routine afternoon movie. Neelam has a more furious reaction to the news of her children’s deaths, and she disappears from the burial to investigate the tragedy on her own.

Gopal and Sushil Ansal, then Asia’s largest property developers and the focus of her investigation, spent years shifting blame for the Uphaar disaster onto the energy company and fire department, respectively. (The brothers went back to court last week in an attempt to stop the distribution of the show, but they were unsuccessful.)

The inferno marked the beginning of multiple iterations of legal purgatory, so any type of justice would take a very long time to arrive. However, showrunner Prashant Nair and co-writer Kevin Luperchio give themselves leeway to maneuver in translating the real-life Krishnamoorthys’ 2016 novel.

An early pursuit that sends Shekhar after an apparently unmoored Neelam serves as notice of propulsive intent. In later episodes, they express their disappointment that the media has stopped covering their story and describe their efforts to create an AVUT network to help survivors (The Association of Victims of Uphaar Fire Tragedy).

Judicious briefing, not slavish procedural, is the order of the day, and the show’s success can be attributed to the series’ suggestive prodding, notable variations of pace, and multiple perspective flips.

The couple’s marriage is strained not only by the tragedy but also by the abrupt silence and emptiness of their home when they returned to it. Behind his surveyor’s glasses, Deol’s Shekhar stays reliable and rational, running a sensible campaign until he is led astray by an old buddy in an episode that hints at the possible separation of the pair.

Neelam is more intense and unpredictable than other people because of the lingering anger she still feels. But for the most part, Deshpande performs expressive marvels with a restricted palette of scowls and frowns, anger that proved enduring and transformative, altering the way India gathered heading into the 21st century. We worry that Neelam will never laugh or smile again since she can’t seem to shrug off an underlying melancholy.

The great dramatic triumph, however, lies in the show’s expansion around the pair, making “Trial by Fire” far more kaleidoscopic than the linear procedural form generally allows. With a haunting, deftly acted sidebar centered on a retired Army couple (Anupam Kher and Ratna Pathak Shah), the show is able to re-examine both the authenticity of the film people were literally dying to see and what India was prepared to stand and fight for in 1997.

One reason “Trial” hits so hard is because this tragedy unfolded on so many different levels: it isn’t just the suffering of the Krishnamoorthys, but the struggle of a country seized by a systemic dysfunction in how it does business.

A quarter of a century later, India has adopted streaming TV on the whole, albeit often haphazardly, with a torrent of projects hurried into production, wasting ideas along the way. To better support the justice for which the Krishnamoorthys and AVUT fought, “Trial by Fire” feels more deliberate, distinguished by a new maturity in writing, direction, performance, and artistry.

The bright, carefree world of the Uphaar’s Bollywood posters seems light years away from the sad, sooty ultimate accounting for the events of June 13. This “Trial,” as the Ansals must have known, favors the common folk. And it does so out of camaraderie and the realization — one the judiciary was excruciatingly slow to embrace — that when the power goes out, we stand to lose just as much as any tycoon. The entire seven-episode run of “Trial by Fire” has been reviewed and is now available on Netflix streaming.