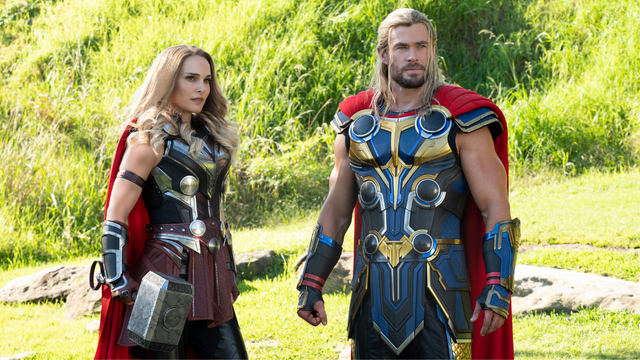 Thor: Love and Thunder appeared to be a sure thing. After 2017’s Thor: Ragnarok, director Taika Waititi returned to the helm, with Chris Hemsworth’s Asgardian Avenger firmly in his lovable comedic groove and Natalie Portman made her grand comeback to the live-action Marvel Cinematic Universe after a nine-year sabbatical.

Surprisingly, the 29th MCU film, which debuted in theatres in July and will be available on Disney Plus and digital on Thursday, September 8th, falls short. Thor’s fourth solo adventure spreads itself too thin by attempting to mix comedy and drama and by combining numerous classic comic storylines into a single plot and consequently ends up looking superficial (even down to its two post-credits scenes).

On September 27, the film will be released on 4K, Blu-ray, and DVD including behind-the-scenes bonuses, deleted scenes, and a director’s commentary by Taika Waititi.

Christian Bale’s villain, Gorr the God-Butcher, is introduced in a bleak manner in the film’s opening scene. After the harsh desert environment of his homeworld claimed the life of his daughter, he embarked on a crusade to exterminate every divine being in the cosmos after meeting an insensitive, heartless god.

This sequence is evocative and patient, allowing Bale’s performance room to breathe and allowing the audience to experience his mounting anguish, uncertainty, and wrath. Then, the Marvel Studios emblem appears and the ride begins. Affective resonance? This film has no additional material.

The last time we saw Thor, in the 2019 film Avengers: Endgame, he had joined the Guardians of the Galaxy for intergalactic adventures following Thanos’s defeat. The God of Thunder, however, completely outclasses his new allies, making him resemble an overpowered video game character as he annihilates their foes and renders the Guardians somewhat ineffective.

Thor and rocky ally (he’s really made of rocks) Korg (Waititi) soon decide to go their own way, jettisoning the Guardian’s plot and largely wasting Chris Pratt, Karen Gillan, and buddies before the joke can develop. It appears that this film couldn’t wait to escape the annoying continuity and return to the Asgardian plot of Thor’s solo films.

As Gorr confronts Thor’s fellow Asgardians, Thor sees his ex-girlfriend Jane Foster (Portman) in battle on Earth. She is wielding Mjolnir, his old hammer, after being declared worthy in her darkest hour and receiving identical abilities to his.

Given Jane’s extremely sympathetic health issues, this plot should be the emotional core of Love and Thunder. The film doesn’t allow sufficient time for the difficulty she encounters to soak in, as if it’s frightened to get too serious and quick to whisk us away to the next adventure (some dramatic moments are also undermined by its two post-credits scenes).

This demand for speed extends to the action, with Jane, in particular, utilizing her new talents in awe-inspiring ways, but neither the editing nor the cinematography allows us the opportunity to appreciate this.

It’s unlikely that many images from this film will be as memorable as those from past MCU films; nothing matches the stratospheric heights of Captain America’s elevator brawl, three Spider-Men swinging into battle, or Scarlet Witch’s confrontation with the Illuminati.

The initial discomfort between Jane and Thor is amusing, largely due to Portman and Hemsworth’s charisma and chemistry, but it does not grow into something particularly engaging. A one-note joke about Thor and his new weapon, Stormbreaker, is more memorable, though even that rapidly becomes stale.

King Valkyrie (Tessa Thompson), who is bored with her duty as the leader of the enchanted tourist trap that New Asgard has become, completes the hero squad (this location includes an excellent deep-cut cameo). Though the film fails to adequately explore her boredom, Thompson imbues the character with enough mischief to make her a delight to watch. The Phantom of the Opera shirt she’s wearing is far more intriguing than any superhero outfit.

A dialogue between Jane and Valkyrie is one of the film’s greatest moments, as it is one of the few instances in which the film slows down and allows its performers and writers to connect emotionally. Putting aside Hemsworth’s magnetic screen presence and great comic timing, one cannot help but question if this voyage would have been more enjoyable without Thor.

After his illustrious introduction, Gorr’s threat is somewhat decreased. As Thor chases a path of supernatural killing across the world, the God Butcher’s comics equivalent (introduced in Jason Aaron’s beloved 2012 Thor: God of Thunder run) poses a significant threat.

This is simply alluded to in Love and Thunder, which reduces Gorr’s villainy to the abduction of Asgardian infants as part of a larger scheme. He does not pose a direct threat to the heroes, which makes him resemble Gorr the God-Hater.

Despite this, Bale’s performance and stylistic choices imbue the character with plenty of eerie, ghostly bogeyman overtones (supposedly inspired by Aphex Twin’s profoundly unnerving Come to Daddy music video). A midway showdown with the heroes is one of the most aesthetically spectacular scenes in the MCU, thanks to the inventive use of color and shadow.

This film has fewer cameos than its immediate MCU predecessor, Doctor Strange and the Multiverse of Madness, but Russell Crowe steals the show as a narcissistic Zeus. Unfortunately, his involvement is essentially restricted to a single flashy set piece that is largely forgettable as the main plot moves on.

Love and Thunder falls short of the extraordinary stories that inspired it. It is a superficial, disappointing mishmash that neither embraces the director’s aesthetic nor exploits the dramatic potential of the cast. It’s still a fun, funny piece in the MCU canon, but it’s hardly the traditional Thor journey its handsome protagonist believes he’s on.