Where is Angelyne and What Happened to Her? Is Angelyne Still Alive? 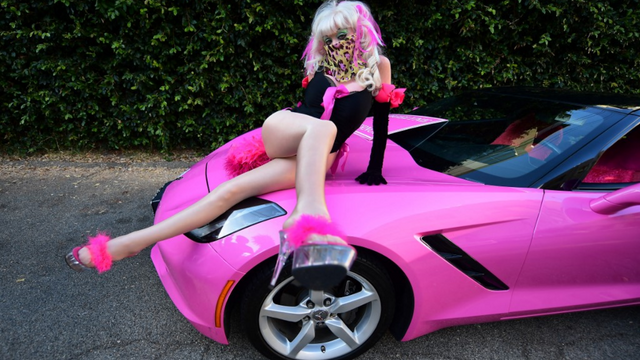 Born Ronia Tamar Goldberg on September 12, 1950, Angelyne is an American singer, actress, media personality, and model. She rose to fame in 1984 as a result of a series of iconic billboards featuring just the word “Angelyne” and images of her posing suggestively that appeared in and around Los Angeles, California.

Yes, Angelyne is still frequently spotted driving her pink Corvette through the streets of Los Angeles and is essentially still alive and well.

She acquired popularity following her first billboard, which was released in February 1984 and went viral, and as a result, we went on to create a number of music albums and singles.

Additionally, Angelyne played supporting roles in a number of films, including “Earth Girls Are Easy” and “The Frisco Kid.” She had more than 200 billboards throughout the city by 1995.

Where is Angelyne Now and What Happened to Her?

As far as we know, Angelyne is still a well-known figure in Los Angeles and currently resides there.

She sells her wares both online and from the trunk of her car when she meets fans in person. She also keeps up a lively social media presence, sharing daily photos and videos with her admirers.

In April 2021, Angelyne conducted her first online NFT auction for a piece of Lizzie Klein’s cryptographic art. Furthermore, she ran an independent campaign for governor of California in the recall election of 2021. Since she received 0.05 percent of the vote, Governor Gavin Newsom was not brought to account.

In an August 2021 interview, Angelyne discussed her ideas for helping the homeless if she were elected. “Religious institutions like churches, mosques, and temples will fund The Homeless Project,” she said. There won’t be any costs incurred by the taxpayer. Members would be open to making financial contributions to The Homeless Project.

The donations to aid the homeless will not involve the clergy. There won’t be any surface skimming. Every contribution will be reviewed on a state website. Billboards, radio and television advertising, newspapers, and social media will all feature PSAs to further the cause.

Additionally, Angelyne disclosed in 2021 that she will be helming a movie about herself titled “Angelyne: Billboard Queen.” She plans to use the movie to share her genuine story, which she claims has been misrepresented by the media, despite the pandemic’s unfortunate delay in production.

In a May 2022 interview, she not only denounced Gary Baum’s 2017 profile of her in The Hollywood Reporter, but she also stated her concerns about how the show “Angelyne” portrays her.

“There is only one Angelyne, and I’m concerned that the show might mislead viewers… I was going to be given the job of executive producer. And I initially agreed since I didn’t realize it would be so awful, according to Angelyne.

I’m creative,” she continued. I paint in the mirror. My lips, nose, and eyes all have to be perfect. When someone uses that and mucks it up, it hurts. Even though I can’t even see it. Angelyne is now hoping that her own movie would finally bring attention to her life.