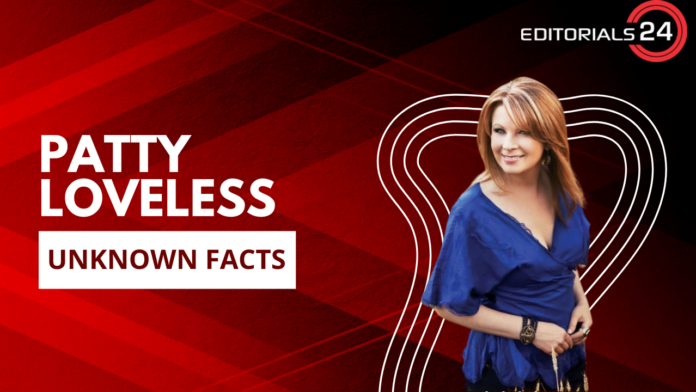 Patty Loveless is a famous country music singer from the United States. She was born Patricia Lee Ramey on January 4, 1957. Her first recording contract was with the Nashville branch of MCA Records in 1985, but she had been performing since she was a teenager. Even though she had a string of flops, she finally found success with a cover of George Jones’ “If My Heart Had Windows” at the decade’s close.

After releasing five albums for MCA, Loveless switched to Epic Records in 1993, where she has since recorded an additional nine studio albums. In the US, four of her albums have achieved platinum status: Honky Tonk Angel, Only What I Feel, When Fallen Angels Fly, and The Trouble with the Truth.

Check out These Interesting Tidbits About Patty Loveless!

1. She Was Born and Raised in Pikeville, Kentucky

Patricia Lee Ramey, better known as Patty Loveless, was born on January 4, 1957, in a Pike County, Appalachia mining village. Her father was a coal miner, thus the family moved frequently to the nearby town of Elkhorn City, where she spent the majority of her formative years.

2. She Was Able to Deal with The Culture Shock by Listening to Music

After years of labor in the coal mines left Loveless’ father with black lung illness, sometimes known as coal worker’s pneumoconiosis, the family was uprooted from their rural home and relocated to Louisville when Loveless was 10 years old. City living was challenging for Loveless. The only solace she could find was in music.

Read More: Fans May Not Know These 10+ Cool Facts About Julia Roberts.!

3. There Were Several Challenges in Her Marriage

She tied the knot with the Wilburn Brothers’ drummer Terry Lovelace in 1976. After that, they both began careers in country music. However, it all turned into a nasty divorce. She secretly married music mogul and songwriter Emory Gordy Jr. in an elopement nearly two years later. Since then, they’ve tied the knot, and Gordy Jr. has produced a few tracks for Patty Loveless’s discography.

4. It Wasn’t for No Cause that She Changed Her Surname

After the breakup of her marriage to Terry Lovelace, she legally changed her surname to Loveless. That’s because she didn’t want people confusing her with Linda Lovelace, who was popular in pornographic films at the time.

5. Her New Voice Was the Result of Throat Surgery

Loveless had corrective surgery on her throat in 1992 to remove a blood artery that had become irritated on her vocal cords. The country singer was locked up for nine weeks with no chance to speak or sing, forcing her to rely on pen and Post-It notes for all of her communication needs. On her 36th birthday, however, she had her debut appearance at the Grand Ole Opry again, this time with a richer, fuller voice.

6. She’s the Sixth of Seven Kids

Actually, Loveless’ own siblings served as her initial motivation. Both her brother Roger and her sister Dottie were aspiring country musicians who played often in dive bars across eastern Kentucky. Dottie’s band, the Singin’ Swingin’ Rameys, no longer had her since she got married, so Loveless now sings for them at country dances. When that happened, she was only 11 years old.

7. She Began Performing Music at A Young Age

The Wilburn Brothers saw potential in Loveless’s vocals and songwriting when she was only 14 years old. She also tried out for Porter Wagoner, who offered her a publishing contract and put her in a band alongside Dolly Parton and Wagoner. Unfortunately for Loveless, she had to juggle her musical pursuits with her academic obligations.

8. The Lynn Family Are Eighth-Cousins to Her

Loveless is related to country music stars Loretta Lynn and Crystal Gayle through her father’s side.