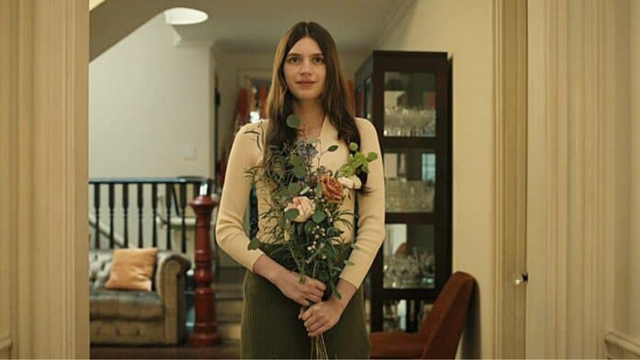 The stakes have slowly risen with each season of Servant, a show created by M. Night Shyamalan and Tony Basgallop that is often absurd but still nasty. What began as a story about a family coping with a devastating loss by hiring a mystery live-in nanny named Leanne (Nell Tiger Free) evolved into a story about cults, kidnappings, and the potential end of the world as we know it.

It takes place almost completely in a crumbling brownstone in a Philadelphia neighborhood that teeters on the brink of anarchy, and it is one of those series that has flourished on its own more chaotic atmosphere.

As it investigates the possibility of otherworldly forces invading the tense constraints of the domestic, Servant has tapped into something unique in the broad streaming landscape, despite having at times felt like it was spinning its wheels in previous seasons. In the first three episodes of its fourth and final season, everything reaches a magnificently macabre breaking point, laying the stage for what already feels like the most stunning conclusion to the series.

A few months have passed since the harrowing conclusion of season three, which sent our protagonists tumbling down to Earth. Dorothy, the disturbed matriarch portrayed by Lauren Ambrose, literally fell from the top story of their home while attempting to flee with young Jericho. She has amazingly survived and will now complete her recuperation at home, having previously done so in a medical facility.

However, the home she is returning to is radically different because Leanne has assumed complete control during her absence. While Dorothy’s frequently oblivious husband Sean (Toby Kebbell) continues making all the meals when not working to become this world’s rudest reality television chef à la Gordon Ramsay and her caustic brother Julian (Rupert Grint) is still hanging around to be what is essentially a submissive to Leanne (a glorious element that the show has fun playing with), there are numerous exterior developments.

Just outside the chaotic dynamics of the interior, opposing forces are gathering. Leanne has continued to amass a following of devoted followers who depend on her every word, but her former cult is not willing to let her go so simply.

With each passing second, it becomes clear that this powder keg is becoming increasingly unstable. It will only take a spark from Leanne to unleash upon their world a cataclysm of biblical proportions.

Similar to the house where all the characters spend the majority of their time, Servant often has the feeling of being built on a shaky foundation. The story’s ability to simultaneously relish in the disputes among the frequently harsh characters and convey the sadness underneath them has allowed it to remain cohesive. Specifically, the love-hate relationship between Dorothy and Leanne has become the most fascinating aspect to see.

This is mostly thanks to Ambrose and Free’s complex performances, which ride tremendous emotional waves that persistently crash throughout the plot. Their tumultuous and troubled relationship has seen so many swings that there is palpable tension about what will occur when the gloves are finally taken off. Leanne continues to view Dorothy as a mother figure and want Dorothy’s affection.

The continually eerie and darkly hilarious manner in which this unfolds is both delicious and terrifying. Both are faulty, and neither will concede ground.

They are like injured tigers surrounding one another, frightened of what will happen next but still engaging in a captivating dance for dominance. This results in Leanne being physically closer to Dorothy than ever before, despite Dorothy’s best efforts to keep her at a distance.

They have reached a precarious stalemate, but it will not last. Dorothy has undergone great physical and psychological suffering that has been buried, despite her strong exterior. For three seasons, she and everyone around her have attempted to avoid this situation, but they and we are beginning to realize that this strategy cannot last forever.

Despite not always being an outright horror piece as often as it could be, seeing the house become infected with a disease that may soon kill everyone in it is a suitably gloomy experience.

The despair stems from the fact that they continue to disregard its growing influence. Whether in moments of spectacle, such as when Leanne is stranded in a risky situation by herself, or in sequences where characters verbally attack one another, the many directors make the most of practically every minute.

If anything, the more explosive scenes that occur outside are significantly less intriguing and frequently detract from the more focused episodes that occur inside the house. For all the ways in which these little settings could become repetitious or confined in less capable hands, the directors of each episode ensure that it always seems dynamic without ever overplaying their hands.

This season has seen the return of director Kitty Green, who continues to produce remarkable work. Similar to her earlier film The Assistant, a subtle nightmare of a debut narrative feature picture that everyone should see, she has the ability to extract suffocating emotional tension from even the most straightforward sequences. She brings to life every tiny detail, from a montage of characters dealing with an unexpected infestation to a memorable scene in which Dorothy discovers Leanne shaving her legs with a straight razor.

Multiple locked-down shots witness private yet maddening moments openly and honestly before giving way to flowing camera motions that bring us closer to the darkness, creating an almost analytical coldness.

It is as if we are a detached deity flying across each scene, observing the beginning of the disintegration of a family that is still attempting to convince itself that it can remain intact. Every moment feels like we are dancing on the edge of a cliff, a short step away from a precipitous fall from which there is no return.

There are moments where you feel that the show is winking at the audience, despite the series’ penchant for the gloomy subject matter. When performed as straightforward jokes, they can be less witty than when presented as a terrifying farce.

At its best, it imbues the series with a sense that there may be a maniac behind the wheel who is testing our willingness for things to become extremely chaotic. When done correctly, as has been the case thus far at the beginning of the end, the patience of the previous seasons has the potential to pay off in a manner, unlike anything that has come before. Even if it can become a little lost in itself as it grows, the foundation that is being established is quite promising.

One can only hope that Servant continues to hold itself together as the world it has created for itself continues to disintegrate. A major conflict taking place in the tiniest of settings is ambitious in the greatest manner, making it worthwhile to take one last trip to see how everything comes together.

Regardless of who ultimately prevails in the battle between Leanne and Dorothy, if the next episodes are as entertaining as the first three, the audience will be the true winner. The last season of Servant promises to reward those who have maintained their faith with an unsettling and powerful depiction of one family’s decline.

What is the twist in Servant?

The show’s opener reveals that Jericho is a doll an unlicensed therapist gave Dorothy as a radical treatment exercise after their real son Jericho left her catatonic. That’s plenty for an unsettling thriller, but Servant adds twists.

Is season 4 the last season of Servant?