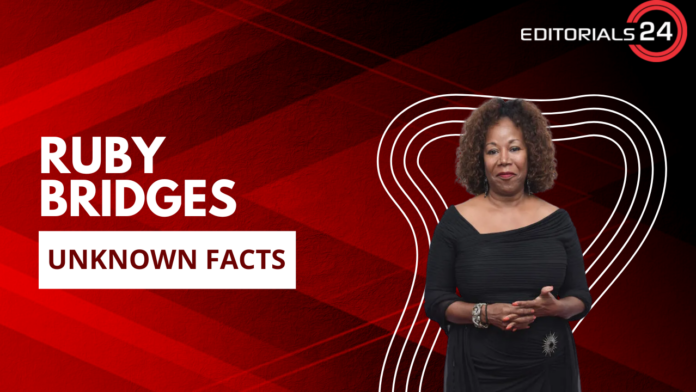 In 1960, Ruby Bridges showed incredible bravery and strength when she confronted a mob of segregationists outside of her elementary school in New Orleans, Louisiana.

Therefore, she was a pioneer in the movement to desegregate schools in the South by enrolling in an all-white elementary school as the first African-American student. The less known about Ruby Bridges are listed below:

1. Ruby Bridges Was the First Child Born to Her Family

Upon entering this world on September 8, 1954, Ruby Nell Bridges did so in the small town of Tylertown, Mississippi. When Bridges was born, he was the oldest of eight children. She was the older sibling and spent a lot of time caring for her younger siblings.

She spent her childhood on a sharecropped farm in Mississippi, where her family has deep roots. Her parents, Abon and Lucille Bridges, uprooted the family when she was four years old and set out for New Orleans in search of opportunity.

Her parents were having financial difficulties, so he worked as a gas station attendant and her mom worked nights to make ends meet. Soon after, Bridges’s parents added a younger sister and brother to the family.

2. Ruby Bridges Was Selected for Integration

She entered the world in 1954, the year Brown v. Board of Education struck down “separate but equal” education for African Americans, but the order was ignored or blocked in many southern states.

Bridges did well on the entrance exam, and he was accepted to attend William Frantz Elementary School in the city.

They told her parents that she would be the first black student to attend the local white school, marking the beginning of the integration of black and white students. Her dad wasn’t on board with the plan because he was worried about his daughter’s safety.

On the other hand, she encouraged her daughter to take advantage of the new school and even accompanied Ruby on the first day. White parents and residents of the surrounding community were strongly opposed to school integration.

3. There Was only One First-Grader Named Ruby Bridges

Image of Ruby Bridges Hall giving a speech at the temporary branch library in Algiers Point, Louisiana. The majority of white parents refused to send their children to school, so Ruby was the only first grader in her class for the majority of the year.

Since she had to work closely with her teacher, Barbara Henry, the two quickly became close friends. She was barred from participating in regular school activities, such as eating lunch or playing at recess.

In addition, a federal marshal was required to accompany Ruby to the restroom. Over time, parental anger and anxiety subsided, and students were readmitted to Frantz. After a year, all of the students returned, and the school was finally integrated.

The mission of the foundation is to foster an environment where people of all backgrounds are valued and respected.

The primary goal of the foundation is to open an inclusive and equitable school in the former William Frantz Elementary. To move forward, we must learn to appreciate our racial and cultural differences, and this program will foster an environment where children from different backgrounds can do what their elders have not been able to do.

Ruby persisted in her advocacy for civil rights and even established a nonprofit to advance issues of equality and understanding between races.

Ruby is an actual person who has become a cultural icon in the United States. On November 14, 1960, she became the first Black student at William Frantz Elementary School in New Orleans. She was depicted in a Norman Rockwell painting as a young girl being escorted into school by burly U.S. marshals.

Read More: There are 10 Interesting Facts About Kaley Cuoco.!

6. The President of The United States Bestowed an Honor upon Ruby Bridges

She was awarded the Presidential Citizens Medal by Bill Clinton in 2001. The President’s Medal for Citizenship was created in 1969 by Executive Order 11494.

To honor American citizens who have gone above and beyond in their service to the country, the President of the United States presents them with the medal. Any U.S. citizen, living or dead, can receive this medal at the discretion of the President.

Referenced in Her Essay Was:

When she was just a little girl, Ruby Bridges had the courage to walk past angry protestors and be the first African American student at her New Orleans school.

To this day, she maintains the same level of bravery, shunning resentment in favor of spreading a message of love, faith, and acceptance to a new generation of Americans. To receive the Presidential Citizens Medal is to receive the United States’ second-highest civilian honor.

She was one of the African-American students at a public school that welcomed students of all races. Still, Ruby’s history and dogged character are just scratching the surface. Ruby travels the country sharing her story and educating both kids and adults.

Through the Ruby Bridges Foundation’s educational initiatives, she hopes to spread messages of acceptance, kindness, and gratitude for one another’s differences.