Editorials 24
HomeCelebrityTerry Bradshaw Weight Gain: What Is the Secret Behind the Former Football...
Celebrity

Terry Bradshaw Weight Gain: What Is the Secret Behind the Former Football Player Gaining 31 Pounds? 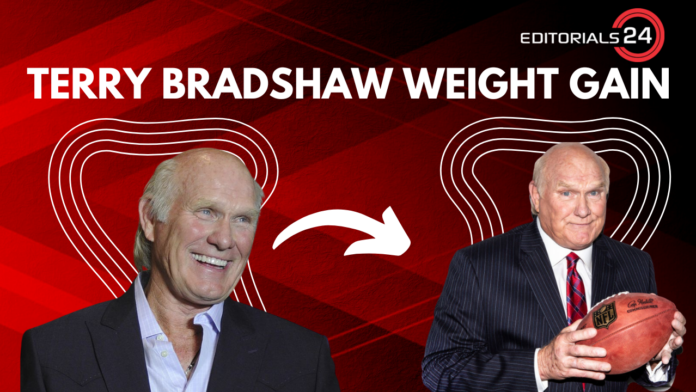 Terry Paxton Bradshaw, born in the United States on September 2, 1948, played quarterback for the Pittsburgh Steelers of the National Football League (NFL).

He has been a sports commentator on TV and co-host of Fox NFL Sunday since its inception in 1994. Bradshaw is also a musician and actor, having appeared in a number of TV shows (usually as himself) and films (including, most notably, a co-starring role in the film Failure to Launch) and releasing a number of country music albums.

The NFL Commentator Terry Bradshaw Put on 31 Pounds While Quarantined

When it comes to quarantines, Terry Bradshaw (@official terry Bradshaw) is no stranger. Fans find him more relatable than ever despite the fact that he gained 31 pounds (14 kg) during his time in quarantine.

Although his zany and eccentric personality has been well-documented through his years as an analyst for Fox NFL Sunday, his show on E! has shown a different side of the NFL legend.

During the COVID-19 pandemic, audiences are looking for uplifting entertainment, and he has proven to be particularly calming in this regard. The lockdown on The Bradshaw Bunch led to Bradshaw gaining weight, from 237 to 268 pounds, as revealed by Bradshaw.

In one episode, the ex-football player had a hard time donning his pants. E! Online emphasized how well he handled the situation by not getting angry or ashamed, and instead keeping a positive outlook.

Terry Bradshaw Has Gained so Much Weight

He cannot fit into his favorite pair of jeans to wear to the NASCAR event to which he and his family have been invited.

Meanwhile, the sportscaster tries futilely to wriggle them on while lying down on his bed. He joked with Tammy about how difficult it was to lose weight while in quarantine and how it would be a problem for him to fit into his race suit.

Terry is successful in donning and fastening the pants after much effort. Additionally, he has amassed a weight of 257 pounds. He’s doing great, and giving up alcohol seems to be helping.

How Many Daughters Does Terry Bradshaw Have?

Terry Bradshaw is the father of Rachel Bradshaw Hopkins, who is Terry’s oldest child. Rachel is a singer who has appeared on reality TV, specifically the canceled series Nashville, and she has a connection to the NFL that is unrelated to her father.

She wed Rob Bironas, a quarterback for the Tennessee Titans. Sadly, three months later, Bironas was killed in a car crash.

According to the Tennessean, the couple first crossed paths at a 2012 fundraiser for breast cancer awareness. The New York Post reported that Rachel was conflicted about whether or not to address the tragedy on the show.

She concluded, “this is my life, and everyone close to me understands my challenges with my journey over the past six years, so of course, I’m going to talk about it.” She continued, though, “I wouldn’t have done that if my family and my dad weren’t there.”

Since most NFL players did not make enough money to focus solely on football at the time of Bradshaw’s early years with the Steelers, he worked as a used-car salesman during the offseason to supplement his income.

In the ’70s and ’80s, you could buy peanut butter with Bradshaw’s likeness on the jar. Spots were broadcast in the Shreveport area.

Bradshaw joined the HighLine Performance Group racing team in 2001 to compete in NASCAR. The team is now known as FitzBradshaw Racing. Furthermore, he acts as the company’s official spokesperson for Jani-King International, Inc. Bradshaw sold his stake in the team in 2006.