Editorials 24
HomeCelebrityKnow These Facts About House of The Dragon's Actress Emma Darcy!
Celebrity

Know These Facts About House of The Dragon’s Actress Emma Darcy! 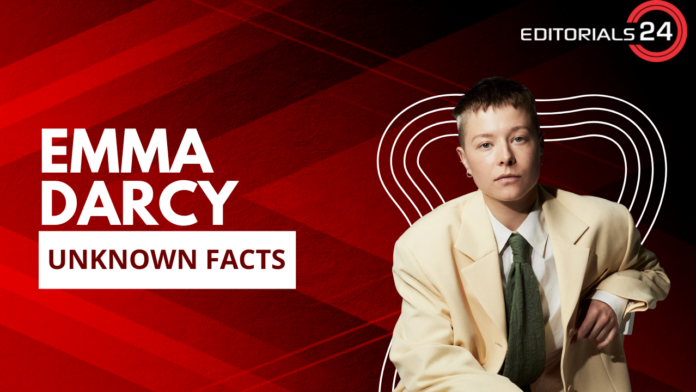 D’Arcy has performed on stage in a wide range of works, including The Pillowman at the Oxford Playhouse; Romeo and Juliet at the Southwark Playhouse; The Games We Played at Theatre503; Against at the Almeida Theatre alongside Ben Whishaw; A Girl in School Uniform (Walks into a Bar) at the West Yorkshire Playhouse; Mrs. Dalloway at the Arcola Theatre; and The Crucible at The Yard Theatre. Keep reading to find out facts about Emma D’Arcy that you probably never knew.

A mere 5 feet and 8 inches in height, Emma D’Arcy is petite. They are 1.73 meters tall, according to the metric system.

2. She Doesn’t Use Social Media Much

The dissatisfaction of Emma D’Arcy’s potential social media followers is understandable. However, it does not appear that Emma places a high value on developing a robust online profile. In 2016, she signed up for Twitter, and while she does use it, she primarily retweets the content of others. She has just 1,400 Twitter followers right now. It seems as though she does not maintain any other official profiles on any other social media platforms.

3. She Has Acted in Numerous Plays

Although her film career is poised to take off, Emma’s true home is on stage. She has had a fruitful career on stage, having performed in such plays as Romeo and Juliet, The Games We Played, and The Crucible.

4. She Has a Formal Education

Although natural ability is certainly a plus, it won’t get you very far in the competitive field of professional acting. Actors have realized that one of the finest ways to succeed is to educate themselves on the craft as a whole. When Emma was younger, she attended the Ruskin School of Art in Oxford, England, to study acting.

5. She Is a Secretive Person

For the most part, the public is accustomed to being well-versed in the lives of famous people, but that’s not what Emma D’Arcy wants. It seems she is a very private person because she hasn’t revealed anything about herself. Her desire for personal space likely plays a role in her lack of online presence.

6. She Has a Contract with A Management Firm

An actor’s career can benefit greatly by partnering with a management company. Actors who sign with an agency are more likely to be excited about future opportunities and see their names in front of a wider audience. Emma is represented by the London, United Kingdom-based firm Roxanne Vaca Management.

Emma was born and raised in England, yet little else about her personal life is known. She seems to be living there even now, as she hasn’t mentioned wishing to relocate. She is the co-artistic director of the Forward Arena Theater in London.

8. She Does Not Identify as A Binary Gender

Emma is someone who does not exclusively identify with either gender, hence she is considered to be nonbinary. She often uses they and them in addition to her. Even while she hasn’t discussed her gender in great detail, on July 14 (International Nonbinary Day) she did upload a picture of herself online.

While it would appear that Emma has not yet started a family of her own, she has become a mother in another way. She takes great interest in tending to her plant collection. Plant care isn’t as easy as it looks, so here’s hoping she’s got a green thumb.

What Is Ammoseek Com and How to Connect Ammoseek with Magento?

Zyrtec Weight Gain: Does Antihistamines Affect Our Body Weight or Not?