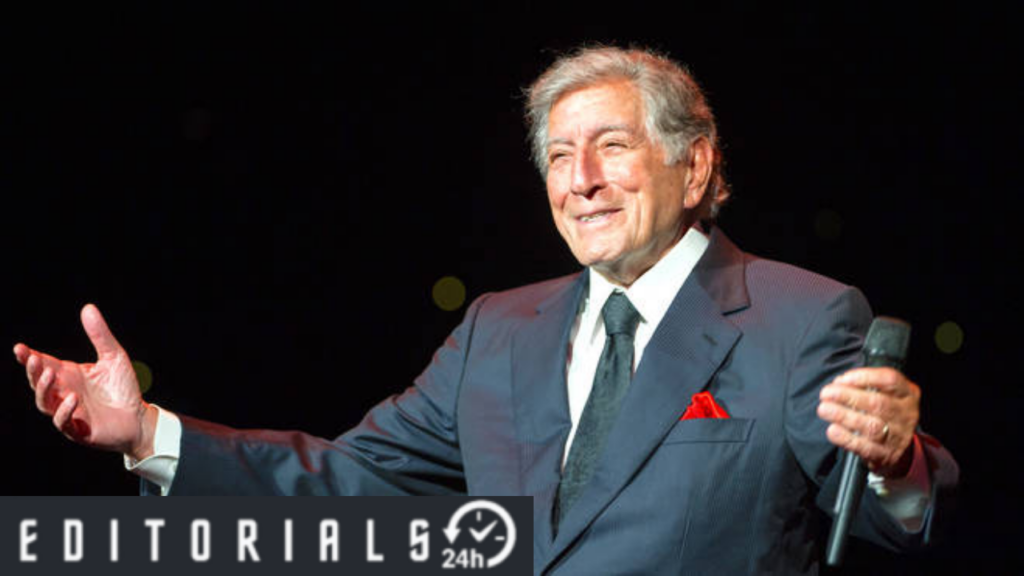 Tony Bennett is a $200 million singer, entertainer, and international icon from the United States. Bennett is the recipient of 20 Grammy Awards, including the Grammy Lifetime Achievement Award. He’s had a long and successful career, selling more than 50 million records worldwide. 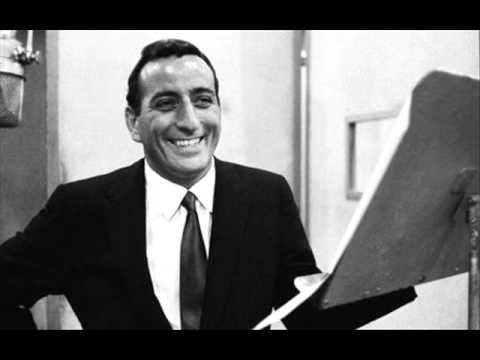 Anthony Dominick Benedetto was born in Queens, New York, on August 3rd, 1926. Anna and John Benedetto, a seamstress and a grocer, were his parents. During the Great Depression, Tony and his two older siblings, Mary and John Jr., grew up in poverty. Bennett’s father passed away when he was ten years old.

Tony grew up listening to Judy Garland, Bing Crosby, Louis Armstrong, and Jack Teagarden, and at the age of 13, he was working as a singing waiter in Queens Italian restaurants. Bennett was a superb caricaturist as well as a vocalist, and he studied painting and music at New York’s School of Industrial Art. He did, however, leave out at the age of 16 in order to help his family. He worked a variety of low-wage jobs while singing at local amateur evenings.

Tony enlisted in the US Army in November 1944, and by March 1945, he was serving as an infantry rifleman on the front lines. Bennett saw brutal battle in harsh winter circumstances as the Allies pushed the Germans back, nearly escaping death on several occasions. Tony was part of the liberation of a Nazi concentration camp near Landsberg in the end.

Bennett returned to the United States in 1946 after being discharged from the army and trained at the American Theatre Wing, where he mastered bel canto singing and developed a style that resembled the phrasing of instruments like the saxophone and piano. Tony was discovered by Pearl Bailey in 1949, and she encouraged him to open for her at a Greenwich Village show. Bob Hope was in attendance, and he eventually invited Bennett to join him on the road. Tony was signed to the renowned Columbia Records label a year later, in 1950.

Bennett started out singing orchestral, pop, and jazz music. “Because of You” was his first huge hit. In 1951, the song went to number one on the pop charts, where it stayed for ten weeks. Later that year, he recorded a cover of the country ballad “Cold, Cold, Heart,” which helped him gain a wider, more national audience.

With the advent of the rock and roll era in 1955, existing pop performers found it more difficult to achieve commercial success; yet, Tony remained successful, placing eight singles in the Billboard Top 40 during the latter half of 1950. Bennett released his first full-length album, “Cloud 7,” in 1955, to favorable reviews, then the popular and highly acclaimed “The Beat of My Heart” in 1957.

Tony maintained his nightclub reputation, and in June of 1962, he organized a highly publicized concert at Carnegie Hall, featuring an all-star roster of musicians. Bennett’s image as a show star was cemented by the concert, which contained 44 songs and was a big success.

Tony released an album and song titled “I Left My Heart In San Francisco” that same year. Both the song and the album were certified gold, and he won Grammy Awards for Record of the Year and Best Male Solo Vocal Performance for both of them. Bennett’s hallmark tune, “I Left My Heart In San Francisco,” was named 23rd on an RIAA list of the most historically significant songs of the twentieth century in 2001. The Beatles and the British Invasion came to the United States in 1964, drawing the public’s attention away from jazz, although Tony continued to release albums and singles with small hits for the rest of the decade.

Bennett developed a heroin problem in the 1970s, and by 1979, he didn’t have a recording contract, no manager, and was barely performing. Tony sought treatment from his son Danny after a near-fatal overdose. His son, a musician with business acumen, chose to take over as his father’s manager. Bennett signed with Columbia Records in 1986 and released “The Art of Excellence,” his first album to chart since 1972, after booking many tours for his father.

Tony began making appearances on Late Night with David Letterman, Late Night with Conan O’Brien, The Simpsons, Muppets Tonight, and a variety of MTV shows. Bennett was resurrected after connecting with a younger audience. Tony continued to travel and record throughout the 1990s and early 2000s, delivering records that garnered him Platinum certification and Grammy Awards for Album of the Year and Best Traditional Pop Vocal Performance.

Bennett released “Duets II” in 2011, at the age of 85, a collection of jazz standards sung alongside Aretha Franklin, Willie Nelson, Amy Winehouse, and Lady Gaga. Tony became the oldest living artist to debut at number one on the Billboard 200 with the album. Bennett went on to win eleven additional Grammy Awards and a star on the Hollywood Walk of Fame in the following years.

Tony’s family announced in February 2021 that he had been diagnosed with Alzheimer’s disease in 2016, despite the fact that he had continued to perform and record tirelessly until the COVID-19 epidemic. 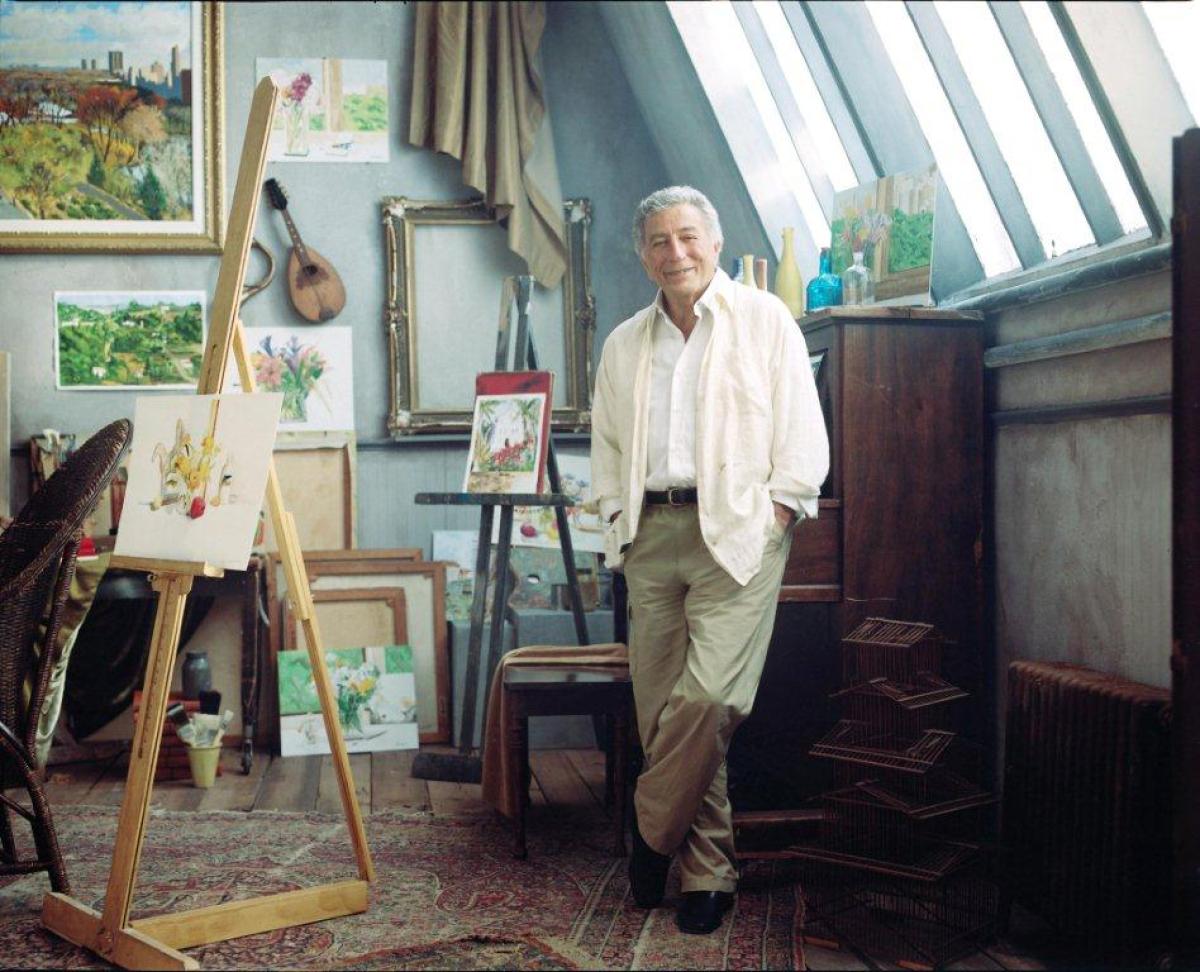 Bennett is also a well-known painter, whose work has been shown in a number of galleries throughout the world. Some of his works have fetched up to $80,000 in the auction. Tony now spends his days drawing what he observes while strolling across Manhattan.

Bennett married Patricia Beech in 1952, after meeting her at a Cleveland nightclub performance. Danny and Dae, their two kids, were born to them. The couple was married till 1965.

In 1971, Tony married actress Sandra Grant, with whom he had two daughters, Joanna and Antonia. Bennett’s drug addiction caused the marriage to fall apart, and the pair divorced in 1979.

Tony began a connection with Susan Crow, a young woman, in the 1980s. The couple remained romantically linked and married in 2007.

Tony resided in a magnificent mansion in Marin County, California, for many years. Almost every room in the 8,600 square-foot, 7-bedroom estate boasts a picture-perfect vista of San Francisco (appropriately). Here’s a video tour of the mansion, which is in the town of Belvedere, which is in the city of Tiburon:

Tony continues to live in a New York City apartment with a view of Central Park.