Windfall Movie Review: A Visual Stunner That Maintains Suspense Until the Very End 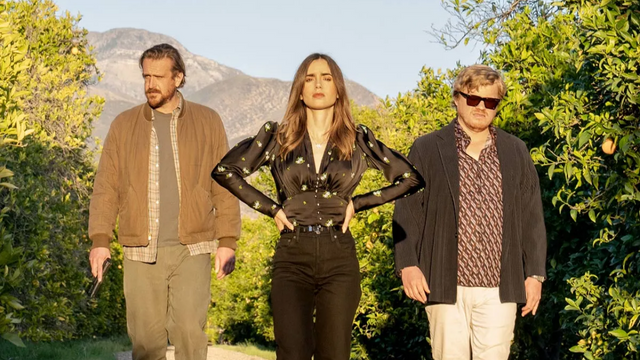 Windfall is a darkly humorous thriller that combines a marital drama with a disastrous robbery. Charlie McDowell, director of The One I Love, directs a screenplay by Justin Lader and Andrew Kevin Walker. It is a film that combines cinematic and theatrical elements. Windfall is somewhat subdued, yet it is nonetheless an engaging neo-noir.

Nobody (Jason Segel) breaks into the unoccupied vacation home of a tech millionaire CEO (Jesse Plemons). The thief chooses to explore the residence and sample the pleasant life with leisure. However, he is caught off guard when the CEO and his wife (Lily Collins) arrive for a last-minute vacation.

The situation continues to spin out of hand as the trio attempts to find a solution. However, Nobody is in over his head as he strives to obtain the maximum amount of money while escaping unscathed. The CEO and his wife simply want the invader to leave their home so they may continue to enjoy the remainder of their holiday weekend.

The screenplay by Lader and Walker conceals the identities of all of its characters, merely identifying them as Nobody, the CEO, and his wife. Nobody begins Windfall enjoying the high life in a mansion that is not his.

However, it becomes immediately apparent that he is not a professional thief. The CEO and his wife noticed that he makes huge errors and never appears to know what he is doing. Consequently, they appear eerily quiet.

Classism is a key issue in Windfall, as the characters’ perspectives on what constitutes a good quality of life are vastly different. The CEO and his wife constantly offer Nobody more money than he requests, laughing at the meager amount of money he is demanding.

The CEO is an extremely egocentric and self-centered individual. He designed an algorithm to “enhance” the lives of organizations so that they can exist with fewer personnel. The CEO’s disregard for those he considers less deserving extends to his own assistant, who he repeatedly degrades.

Windfall incorporates a marital drama with the pandemonium of a house invasion. As he has no qualms about putting his wife in jeopardy to preserve his own skin, the CEO and his wife’s marriage begins to unravel. The screenplay by Lader and Walker examines more personal issues between the pair, whereas Nobody remains a complete mystery.

Windfall’s ability to shift emphasis amongst its characters is maybe one of its most intriguing gimmicks. The perspective of robbery and the social and economic climates are frequently manipulated in the film. It repeatedly raises the question of who the main character is. McDowell alters the narrative to keep the audience wondering as to whose story is being told.

The performance that Jesse Plemons gives in The Power of the Dog is unlike anything he has ever given before. He is so persistent as the self-absorbed CEO that he steals the scene every time he appears on the screen. Segel also delivers a strong performance, blending emotional and comedic abilities. Throughout the duration of the film, Collins demonstrates compassion and genuineness.

McDowell’s film is a marriage drama wrapped in a classism and destiny-themed home invasion thriller. Windfall is a gripping neo-noir with an exceptional performance by Jesse Plemons. The film’s house invasion and marital drama are rather limited, yet it is still quite enjoyable.