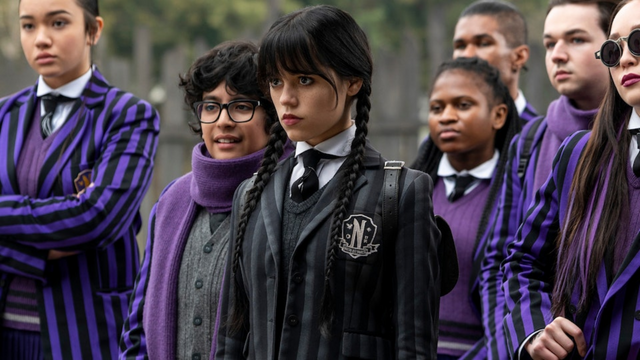 Wednesday is Tim Burton’s horrific vision of Wednesday Addams’s world. If you enjoyed the first season of Riverdale or any old adolescent mystery series, you should watch the Netflix series, which releases all eight episodes the Wednesday before Thanksgiving.

Wednesday Addams, played by Jenna Ortega, is not the goth girl that fans are accustomed to. She is still a perverted Addams Family member.

Wednesday is, however, about a teen girl discovering herself and coming into her own. Wednesday has the opportunity to do so at Nevermore Academy, a school for outcasts such as the visionary Addams.

Wednesday wins the hearts of not one, but two boys in Jericho during her schooling. Tyler (Hunter Doohan), a Normie she meets at the Weathervane, is one of these boys.

Ironically, Tyler has a past with Xavier, the other boy who likes Wednesday (Percy Hynes White). Xavier, a fellow student at Nevermore, has the ability to bring his drawings to life.

Throughout the eight-part series, Wednesday is determined to determine who or what is killing the citizens of Jericho. Specifically, she wants to know why.

In terms of murder mysteries, red herrings are typically overused. This was especially true in The Watcher on Netflix, but we digress. Wednesday utilizes red herrings, but not in a tedious or complicated manner.

Wednesday spends the majority of the episode portraying Xavier as the Hyde, a monster “born of mutation” that “lies dormant until unleashed by a traumatic incident or unlocked by the chemical induction of hypnosis,” and Dr. Valerie Kinbott (Riki Lindhome) as its controlling master. The seventh episode of Wednesday reveals that this is not the case.

Tyler’s mother, despite his Normie background, was a student at Nevermore and a fellow Hyde. Wednesday discovers the truth when Dr. Kinbott is murdered by Tyler: Marilyn Thornhill (Christina Ricci), who has been in the background of Wednesday’s drama for most of the series, is a vengeful relative of Joseph Crackstone, the pilgrim who wished to rid the world of outcasts.

The Tim Burton series consistently keeps viewers on the edge of their seats without excessive use of red herrings. In eight episodes, viewers are given sufficient information to solve the riddle on their own, but only if they look hard enough.

Wednesday’s tale is anchored in familial history, whether it’s Wednesday trying to distinguish herself from her mother, Morticia (Catherine Zeta-Jones), or Marilyn Thornhill, a.k.a. Laurel Gates, seeking retribution for her deceased brother Garett.

This makes the show accessible to both young and mature listeners (which is a good thing because Wednesday is suitable for all ages). Furthermore, it humanizes every character, even the antagonists, and helps us comprehend their motivations.

Then there is the family that Wednesday creates at Nevermore. Wednesday cannot deny the affection and support she receives from Enid (Emma Myers), Eugene (Moose Mostafa), Xavier, and even Bianca (Sunday Joy) when she needs it the most, despite her best efforts to keep to herself and avoid friendships at all costs.

The Netflix series is a reminder that whatever of the distance we put between ourselves and the people around us, humanity will always unite to defeat evil, even when that evil is a zombie pilgrim holding a magical staff.