Troll Ending Explained: What Happens at the End of the Story? 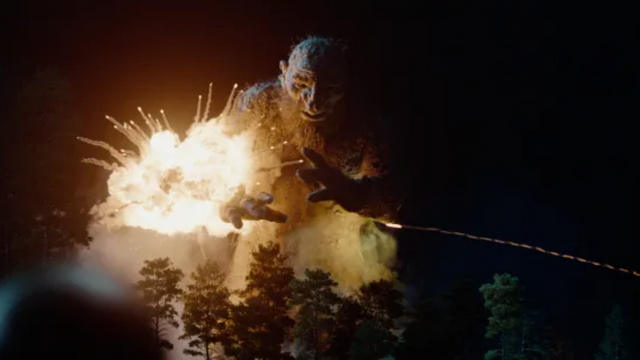 Troll is about a bunch of outcasts that team together to stop a horrible beast from wreaking devastation across the nation. Deep in the Dovre Mountains, an explosion shatters the surrounding area, releasing a monstrous beast that terrorizes the residents.

This creature, after destroying everything in its way, sets its sights on Oslo and marches there gradually. Paleobiology expert Nora Tidemann, Prime Minister’s advisor Andreas Isaksen, and army captain Kris must find a solution before it’s too late to prevent inevitable devastation.

Tobias, Nora’s father, is more knowledgeable about Trolls and local folklore than anyone else in these regions. However, Nora’s strained relationship with her psychotic father may prove to be a stumbling block. But can they reconcile their differences in order to handle Norway’s monster problem?

The initial military engagement with the Troll does not go as planned. Explosions and gunfire have no effect on the giant and it can smell the blood of individual soldiers too. After consuming one of the troops battling alongside the group, Tobias rises to his feet and attempts to soothe the creature. With their arms extended, he appears to be successful.

Nonetheless, a second car approaches and pummels the troll with bullets. Tobias is sent flying and smashing to the ground by the Troll’s tail as it spins and squashes the people within with a single boot. “Listen my child. Believe…” Before he can elaborate on his statement to Nora, he passes away.

After a disastrous operation employing church bells that resulted in deaths and the loss of three helicopters, the Prime Minister delivers a televised address to the nation in an effort to calm the populace. She evacuates Oslo, declares a state of evacuation, and ensures that the surrounding regions are also clear. “Look out for one another… and God bless us all and our fatherland.” She says.

As a result of all the residents departing, Nora experiences an epiphany. She turns around and returns to Oslo en route to the airport, believing that the Royal Palace in Oslo contains vital information. This clarifies the meaning of “Sinding” in her father’s journal, which refers to the man currently dwelling within.

Nora and Andreas are taken deep down at the Royal Palace, where Sinding admits that he and the other authorities ruined Tobias’ life to safeguard their secret. And that secret is the skeletal remains of an underground Troll family.

Family is the most important thing to trolls, and during the Christianization of Norway, the Troll King was enticed to the Dovre Mountain and allowed to die there. Obviously, the earlier explosions allowed him to escape, and he is now returning to Oslo in an effort to reconnect with his children. When Nora focuses her UV light on the bones, she observes that they sizzle and develops a plan.

Nora takes possession of the Queen’s pickup truck and calls Captain Kris to get him into position. As the Troll approaches and heads for the city centre, Sigrid’s abilities at HQ come in help as she hacks into the military fighter plane’s system to prevent it from firing missiles at the beast. Sigrid prevents them from doing so by remotely causing a system failure.

With Oslo still standing and Nora’s plan in excellent condition, Andreas offers Nora words of support as she begins to doubt herself. As they leave, the huge tarp on the rear is removed to show… the skull of one of the Troll children discovered underground.

After accidentally shattering the skull and realizing it has no family remaining, the Troll turns its attention on Nora and Andreas, intent on exacting revenge. It pursues them just as Sigrid gets discovered for hacking the system at headquarters.

Nora barely makes it to safety, jumping out of the pickup truck just as the Troll comes, ready to trample and crush her. Massive UV lights affixed to the back of military trucks begin to illuminate the Troll as they surround it. They activate one by one, searing the beast.

What Happens at the End?

Nora abruptly switches off all the lights and begs the Troll to leave while the Troll is immobilized in place by UV lights. Kris orders the men to disarm and cease-fire. “Go where there is safety.” She implores, “Return to the mountain!”

There is a brief period of peace before the Troll collapses in a heap upon the appearance of dawn’s first rays of light. Nora delicately touches the monster just prior to its transformation into stone, observing as its eye closes and the threat is neutralized.

Having previously resolved her differences with her father, Nora decided that this region should be named Tobias Boulder.

Andreas quits his position with the PM to pursue his ambitions of becoming a writer. “Do you believe there are more in the universe? In a secluded mountain cave?” Andreas inquires as Nora grins and the film concludes.