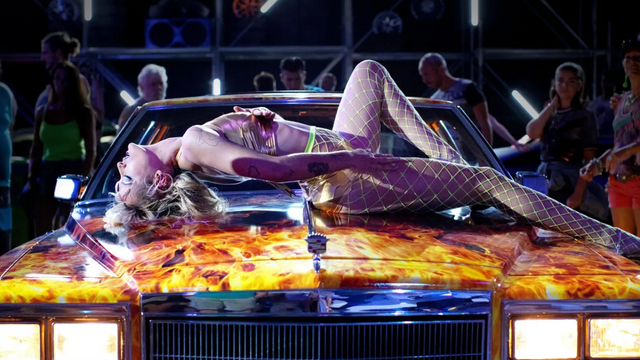 Alexia (Agathe Rousselle) was a child when she was in a car accident that could have killed her. She needs surgery to put a titanium plate in her head because of this. As an adult, Alexia becomes a showgirl.

She dances in cars and has become a bit of a celebrity. She kills several people in horrible ways, which puts her in sight of the police. After getting into the back seat of a car by herself, the showgirl gets pregnant.

So, Alexia decides to run away so she doesn’t get caught. But the police have started putting out pictures of her face, so she now risks being recognized by the public.

Alexia finds pictures of kids who have been missing for a long time. She decides to dress up as a version of one of those children from today.

Titan is a brave and strange movie that would be right at home at the Cannes Film Festival. The last movie to win the Palme d’Or was Parasite, which is a much more accessible film.

Titan has its own goals, and it doesn’t give up on those goals just to let people know its deepest secrets. Most people won’t get into its rhythm, but this is a real treat for people who like arthouse movies.

Titan always goes to places that are hard to guess. It always has an air of mystery, which keeps people interested. In the first half of the movie, Alexia kills innocent people in a very violent way.

There is one house scene that gets the laughs it wants, even though they are very uncomfortable. Titane tries to be scary, but it also has dark humor that balances out how crazy it is.

In the second half of Titane, the story changes direction and turns to Vincent. He really wants to talk to his son, who hasn’t been seen in ten years. He has his own big problems that stem from terrible things that happened to him in the past. But this is when Titane really turns into a story about a father and a child. Vincent and Alexia’s lives crossed at an interesting time, and what they did to each other will change them for the rest of their lives.

Ducournau has her own way of doing things. Not everything makes sense, but not everything has to. Titan doesn’t have a clear story set in the real world.

Instead, it’s a surreal piece of arthouse film that’s meant to make you feel something. It’s not an easy movie to watch, and it’s always weird and disturbing.

The title deals with obsession and addiction in a way that is similar to Ducournau’s Raw. Alexia and Vincent have both come close to dying, which has changed the way they act.

Body horror is used in Titane in ways that will make you sick to your stomach. Alexia changes the way her body looks, but she also does it because she is obsessed. It usually has something to do with sexuality, since the movie looks at sexuality in a way that is often disturbing.

The second half of Titane is the best. As the movie goes on, Vincent’s story gets more interesting and complicated. Lindon is wonderful, and he really takes the character to a higher level.

Rousselle also does a great job as the main character. Several stories about parents and children run through the movie, but the one about Vincent and Alexia is the most interesting.

Titan takes time to digest. It makes people think about some very uncomfortable things, but it’s nuanced and makes people talk about it.

It does exactly what it was supposed to do. It all depends on whether or not you’re willing to give up control and let the story take you on a wild ride. If you do, it’s an experience you’ll never forget. Titan is sexual, violent, and makes you think. There’s nothing else like it.