The Whale Movie Review: The Whale’s Overdramatization Borders on Parody 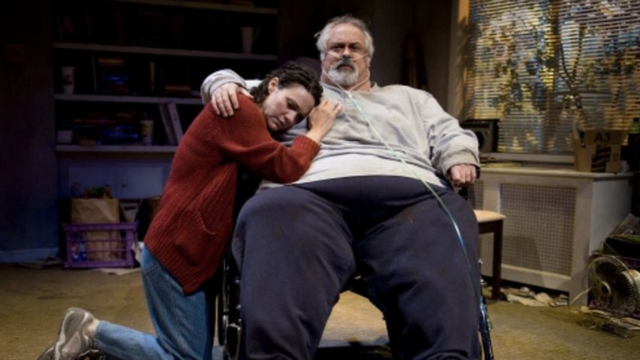 Long has Darren Aronofsky been preoccupied with the weakness and filth of the human body. From a heroin-addicted amputee in Requiem for a Dream (2000) to an aging, steroid-addled hardbody in The Wrestler (2008), from a bulimic ballerina in Black Swan (2010) to a pregnant trophy wife in Mother! (2017), the director’s most memorable protagonists move through the world in bodies that either betray them or are betrayed by them.

His most recent psychological drama, The Whale, is no exception; yet, the type of corpse depicted on-screen and how that body is graphically reproduced has sparked considerable criticism.

Is it automatically grotesque to represent a 600-pound man dying of heart failure in graphic detail? Is the fat suit donned by Brendan Fraser a manifestation of fatphobia? Or, instead, does the film humanize — or even heroize — a figure whose physique we are all too trained to despise?

While these problems regarding the ethics of representation are certainly worth exploring, they have no influence on the quality of this film, which is unfortunately not one of Aronofsky’s best. In fact, it may be his worst work (and I say this as one of the few critics who adored Mother!).

The Whale, adapted from Samuel D. Hunter’s play of the same name, frequently feels stuck within its own stage-like domestic setting as Charlie, the film’s reclusive protagonist, struggles to get off his sofa and wander around his Idaho apartment.

The low Academy aspect ratio adds to the claustrophobia of the frame — may be on purpose, as it pushes our eyes to focus on Charlie, but also in an attempt to suggest that his body, as a spectacle, is sufficient to give the film’s dramatic weight.

It would be an understatement to say that this film is heavy-handed; Aronofsky and Hunter set out the terms of Charlie’s sad descent and ascribe unmistakable moral qualities to practically every individual onscreen.

Liz (Hong Chau, who makes even the most stilted speech realistic), Charlie’s close friend and, as we later find, the sister of Alan, his deceased male lover, informs Charlie in an early scene that he has “one week to live” if he refuses to go to the hospital.

The narrative of the film is then divided into “Day 1,” “Day 2,” etc., just in if we weren’t already frightened that Charlie could be leaving.

Charlie has good reason to avoid devoting his final week to his job — teaching the basics of a five-paragraph essay to indifferent undergraduates online — and instead spends the majority of the film attempting to reconcile with his estranged teenage daughter, Ellie (Sadie Sink), and ex-wife, Mary (Julianne Moore) (Samantha Morton).

Ellie is not your usual flannel-wearing, smartphone-scrolling Gen Z delinquent. She is a vicious high schooler who is equally committed to teasing her overweight father as she is to steal his life savings.

Despite Charlie’s ceaseless gushing over her being a “wonderful person,” she demonstrates precisely zero redeemable qualities. “I’m concerned that she’s forgotten what an extraordinary person she is,” he says to Mary, and we’re expected to believe him.

Similarly, we are to think that Charlie’s body, which he stuffs with food, is indeed obese. But certainly, it is not. In a sense, the opulence of the fat suit aesthetically conceals the difficulties of living with such a body.

At times, I felt pity for Charlie as he attempted to do basic, everyday tasks, but then I would find myself thinking, “That doesn’t look real.” Why did he need to weigh 600 pounds? Fraser is already a large actor, and it could be argued that he would be much more vulnerable onstage if he were obese rather than dangerously obese.

Moby Dick is frequently invoked to remind us of the film’s gravity. Reading what is ostensibly Ellie’s handwritten middle school essay on Herman Melville’s classic (who reads the unabridged version in seventh grade? ), Charlie finds meaning in his own sadness, apparently being redeemed by the possibility that his daughter was also able to discern sadness at some point.

The saddest aspect of this film, though, is that none of the characters, regardless of size, possess the intricacy of any of Melville’s smaller characters. And it’s unfortunate. I would love to watch a compelling drama about a sympathetic overweight person, but Aronofsky was not the director of that film.