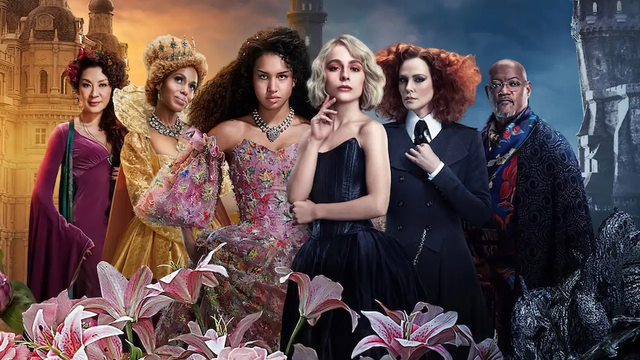 The film asserts from the outset that it will disrupt stereotypes. It establishes the school’s binary with the intention of deconstructing it piece by piece.

Unfortunately, it fails to fulfill its promise. The entire issue is overly simplistic, as are Agatha’s arguments against the institution. In fact, the words ‘good,’ ‘bad,’ ‘beauty,’ and ‘ugliness’ are so frequently repeated that you grow tired of hearing them by the period.

The film attempts to cover multiple subjects, including the distinction between good and evil, the impossibility of parental expectations, and the strength of friendship. However, each of these is treated superficially, with no room for discussion or depth.

In fact, in a hilarious moment of irony, the only thing that changes between good and evil is the characters’ wardrobe! Pastel colors and royal gold for the good, and black for the bad.

The newly wicked now display facial scars in the name of ugliness. The film never concludes its argument on physical appearances, despite all of its focus on attractiveness and ugliness. In conclusion, the matter is merely ignored.

And although posing as a critique of fairy tales, the film falls prey to a number of cliches. One of the most obvious is the male protagonist’s attraction to the girl who “isn’t like the rest.”

Not only does the picture fail to distinguish from a sea of fantasy media, but it is also devoid of content, especially for a piece of entertainment for young adults. YA fiction has always been considerably more complicated and deep than this film suggests.

As with the majority of the film, the world-building feels lifeless and hollow. Sophie and Agatha are immediately forced into school, but they never venture beyond its walls. There are several references to well-known fairy-tale characters in the film, but only a few sentences are devoted to explaining the universe or how it operates.

Even magic is ambiguous, having no rules or specifics within which to operate. Given that it was intended to be the basis of so many treasured legends, there was much opportunity to make it engaging.

The protagonists are engaging and enjoyable to root for, but neither has a satisfying character journey, at least one that is convincing. The remainder of the cast, which is surprisingly star-studded, has little to do beyond the parts they play. While the performances are excellent, none of the characters are given the depth they merit. Given the bloated running time of 2 hours and 27 minutes, it is an accomplishment.

However, where the writing is lacking, the visuals partially compensate. In addition to the customary dazzling flashes of light, the film features stunning blood magic and a sequence in which the dragon tattoo on a girl’s shoulder comes to life. However, there are also certain shortcomings in this department.

At one point, a statue of Cupid comes to life as a child, and it appears to have emerged directly from the uncanny valley. The child subsequently mutates into a ferocious man that pursues Agatha. It appears that they attempted to mimic Hogwarts’ labyrinth of deadly things and creatures, but the result was not even close.

The film’s conclusion is far too convenient. Everything concludes, errors are pardoned, and relationships are restored without explanation.

It must be stated that the story’s goal was to demonstrate that individuals are neither good nor evil, but simply human. As a result, The School for Good and Evil is more of an aesthetic than a story with a significant message.