The Rig Season 1 Review: What Happens in the Rig? 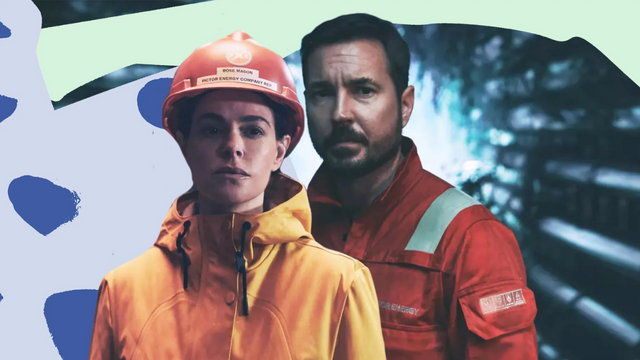 The Rig is marketed as a “big-budget” production, but you’ll have a hard time finding that money here. The Rig is a textbook example of how poorly to develop a television show, with CGI that looks like it was lifted from a project from the early 1990s and a narrative that can’t even recall its own plot. Given that the year is only six days old, this could be one of the worst shows of the year. Given the quantity of skill behind this film – at least in front of the camera – this is astounding.

Let’s start with the positives, as The Rig features an all-star cast that gives it its best. Iain Glen, Richard Pepple, Owen Teale, Mark Bonnar, and Mark Addy are all extraordinary in their respective roles.

Even though the rest are competent, these actors really bring their A-game and try their best to improve the material they’re given. Despite a fascinating premise, the writing and narrative are often bad, which is frustrating in many ways.

The plot revolves around a group of workers stationed on the remote Scottish oil platform Kinloch Bravo. Along with their friends on Kinloch Charlie, they are all prepared to depart for the mainland.

However, unusual tremors emanating from beneath the rig, combined with a heavy cover of fog and strange ash, generate a variety of problems that quickly relate to something considerably worse and more hazardous on the horizon.

As the crew attempts to determine what this may be, one of the men named Baz begins to experience terrifying images associated with something on the ocean floor. The first chapter does a passable job of establishing a mystery before this one descends into derivative waters, adopting tried-and-true notions that have been done better elsewhere for decades… and somehow making them worse.

Nightflyers, The Thing, and Origin have all dealt with the same themes as this show, and that’s not even considering programs like The Expanse, which this show has evidently been affected by, particularly in its later seasons. If you thought the writing in the first few episodes was poor, just wait till episodes 5 and 6.

The Rig is devoid of noteworthy set pieces, which could have salvaged the plot. In fact, the show’s failure to recall its own internal logic completely undercuts the few dramatic moments it has.

For instance, we learn early on that the oil rig is equipped with cameras everywhere, save for some sections that the personnel must explore independently. And yet, in episode 5, the cameras are pointed at the precise locations the crew previously explored.

Again, we learn that food must be rationed because there is so little remaining. Magnus, the head of the establishment, orders the cook to reduce food amounts… however, this story point is never revisited again. It is said briefly, but there are still mountains of food on the plates.

In order to advance the plot, characters act intelligently in one scene and then foolishly and illogically in another, demonstrating a pattern of niggling problems.

At one point, a number of characters are obliged to wear oxygen tanks as they enter a dangerous location, yet their gloves and sleeves are loose. And lo and behold, one of the characters’ hands is stained with blood.

What then is the dialogue? The situation is not much better. “I was unaware Research & Expansion was involved in this industry. What are you doing in this place?” Rose responds with “Research” late in the conversation. However, this is a true line of speech in the show and not a joke.

There will, to be fair, be some who enjoy The Rig. It’s the sort of corny, breezy series that you can watch in the background without much thought… or simply watch humorous videos while surfing through social media. For everyone else, please skip this.

Despite being a supposedly high-budget production, the script is shoddy, the characters are underdeveloped, and the production design is cheap and underfunded. Undoubtedly unfortunate, but this is one to avoid.