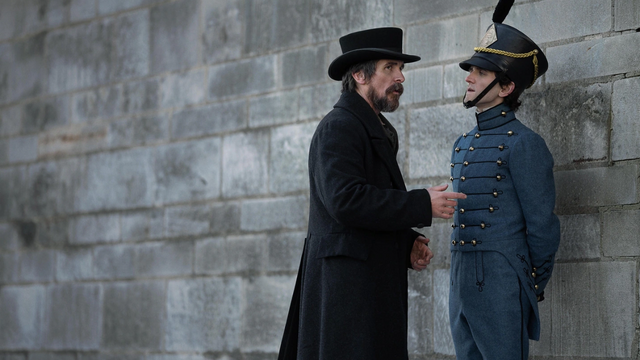 “The Pale Blue Eye” is a pulpy murder mystery with florid dialogue and otherworldly trappings, lavishly equipped and as stodgy as a week-old Christmas pudding.

In a frigid New York backdrop, this historical thriller imagines a crime-solving cooperation between a grumpy police detective and a fake Edgar Allan Poe. The result is an overheated gothic melodrama.

In the winter of 1830, this was the state of the new West Point military institution. A hung guy was discovered in the woods, with his heart brutally removed and his bruises indicating that he was murdered by a man.

Augustus Landor (Christian Bale), whose storied reputation as a scourge of gangs and general miscreants precedes his appearance on the scene, reaches this decision.

A bereaved widower whose daughter has suddenly vanished, Landor’s talents as a detective may be a bit rusty, but a young cadet named Edgar Allan Poe (Harry Melling) proves to be handy if quirky, aide.

(The actual Poe spent a few months at West Point, but there is no evidence that he was a detective on the side.) This Poe is a rum type, with a penchant for limericks and a ruddy complexion. Unsurprisingly, he is not particularly well-liked.

“The Pale Blue Eye” (adapted by filmmaker Scott Cooper from Louis Bayard’s 2006 novel of the same name) is filled with candles, shadows, and dazzling white landscapes, and is in part an origin story for Edgar Allan Poe. Underneath the film’s fragile exterior and slow narrative, madness and hysteria churn.

A woman has convulsions and daubs her face with another’s blood; an apparition haunts Landor, and a hint of satanic ritual leads him to a recluse phrenologist’s cave (Robert Duvall).

As the Poe-etic symbols — a squawking raven and a reference to Lenore — gather, so do the big-name supporting actors: Timothy Spall as a toffee colonel and Gillian Anderson as the crazed wife of the academy’s surgeon (Toby Jones).

Cooper, in his third collaboration with Bale following “Out of the Furnace” (2013) and “Hostiles” (2017), works with a seriousness that stifles the film’s sense of humor. Cooper’s forte is a tragedy, as exemplified by Bale’s painful, constipated performance.

So while Landor calms his demons in the embrace of a barmaid, it is up to Poe to entertain us. His pursuit of the surgeon’s ailing daughter (Lucy Boynton) is the film’s most plausible diversion, given that he enjoys chatting with his deceased mother and that she may be conversing with the devil.

“The Pale Blue Eye” (the title is derived from Edgar Allan Poe’s short story “The Tell-Tale Heart”) is best appreciated as a hat drama, despite its astonishingly gloomy and clever twist.

Cadets sway beneath hats resembling enormous coal scuttles, while their masters barely prevent their extravagant headgear from falling to the ground. (Wigs for women, which are only marginally easier to hold aloft, also qualify.) How any of the actors made it through the film without wearing a neck brace is the real wonder.