The Offering Review: An Ancient Demon Invades a Jewish Funeral Home in an Entertaining Obvious Horror 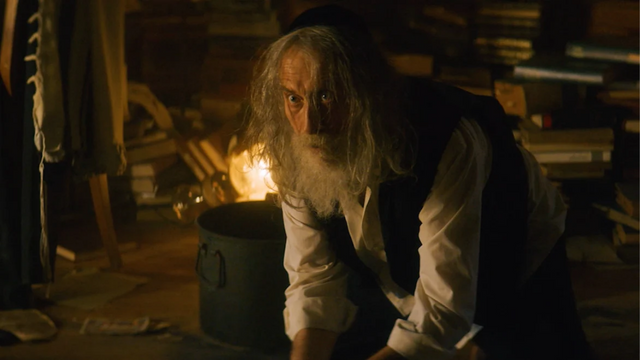 Despite “The Vigil’s” small impact on genre aficionados in 2019, the history of Jewish horror films remains sparse. Adding a page to this collection is “The Offering,” which has a great deal in common with its recent predecessor; it, too, is about a shape-shifting demon that preys on the living following the death and burial of its most recent host.

The film debut of English director Oliver Park is the slicker and more spectacular of the two. However, while entertaining enough, it lacks the atmospheric dread and psychological realism of its predecessor, resulting in a jump-scare-ridden device that is ultimately more corny than frightening.

On January 13, Neon division Decal will premiere the U.S. production shot in Bulgaria in more than 20 U.S. regions simultaneously with its release on digital platforms.

The introductory on-screen text describes “one fearsome female monster” found in “myths of the Near East and Europe” at least as early as the 1st century A.D., known by several names but consistently as a “child-napper.”

Then, we observe an elderly man, Yosille (Anton Trendafilov), executing a ceremony to ward off a terrible entity – poorly, as it turns out.

This sad gentleman is already on a slab in the Feinberg Funeral Home’s basement mortuary when prodigal son Art (Nick Blood) and his pregnant wife Claire arrive (Emily Wiseman).

He is coming to Brooklyn after a period of estrangement, which was reportedly caused in part by the fact that his British wife is a “shiksa”; nonetheless, his widowed father Saul (Allan Corduner), who still operates the family business, looks ecstatic to see them both. Saul’s longtime aide Heimish (Paul Kaye), who feels Art has hidden motivations for their reunion, is less pleased.

Rather implausibly, the two older men assign Art, who has been abroad for quite some time, the task of embalming their deceased neighbor, which must begin with the removal of the murderous knife still lodged in his sternum.

Art is captivated by an amulet around the corpse’s neck, which he ruthlessly removes, oblivious to the fact that he has just released the evil from the corpse, despite the fact that poltergeist-like disturbances (slamming doors, flickering lights, etc.) indicate this to be the case. It does not take long for Claire to begin having disturbing visions or for Art to begin carving esoteric symbols all over the place while in a trance.

Fear that the disappearance of a local girl (Sophia Weldon) may be related to the “curse” in which our heroes know they are entangled heightens the anxiety within the household. Infuriated Heimish also discovers that Art, the real estate agent, is in fact destitute and only came to get his father to sign away the family home/business as loan collateral.

The second half of Hank Hoffman’s screenplay, however, devolves into a chaotic heap of otherworldly dangers that rely too much on cliched “boo!” shocks, stunt action, and creature FX.

Indeed, the halfway mark has not yet been reached when we begin to see excessive amounts of the demon in question, a behemoth whose representation (it has the head of a mutant goat) would have benefited from being observed as briefly as possible, in the shadows.

Other marvels hit the nail on the head in an overly literal manner, throwing actors against walls and the like, especially at a drawn-out climax that is reminiscent of countless such scenes performed ever since “The Exorcist” was premiered 50 years ago.

Despite the relative novelty of Orthodox Jewish rather than Catholic religious foundations, this video lacks creativity and lacks the creepiness necessary to disturb viewers.

Park seems more willing to use cliche shock tactics, such as phantom ghouls leaping out of closets, than to establish the kind of uncomfortable suspense that would allow these shocks to have a stronger impact.

This cliched haunted home vibe is not the fault of Philip Murphy’s production design or Lorenzo Senatore’s widescreen cinematography, both of which make the most of an astonishingly gloomy, nineteenth-century-looking interior. Similarly, the actors perform admirably, with the exception of a young actor whose portrayal of a smirking villain falls short.

However, their sincere efforts are undermined by the film’s general style, which trades credibility for increasingly crowded and ineffective shocks. Claire is faced with so many unpleasant surprises that it becomes difficult to believe she hasn’t already miscarried.

“The Offering” progresses at a quick pace, so it does not run the risk of becoming tedious even as its capacity to frighten diminishes.

However, it ultimately illustrates the maxim “less is more,” especially when attempting a genuine occult horror thriller. Although the overkill is humorous in its own way, especially when the last crew scroll shows a credit for “Special Effects Teeth,” it is simply excessive.