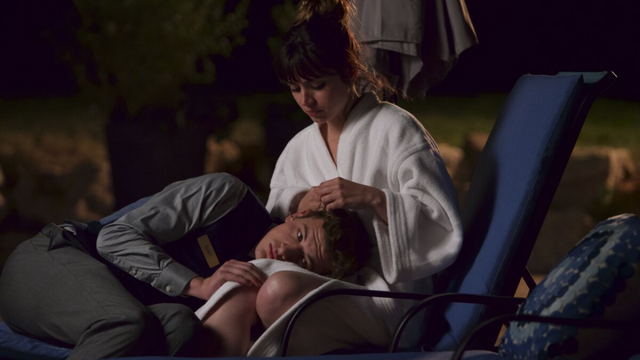 The new movie written and directed by Michael Cristofer is hard to tell what it wants to be. The Night Clerk is supposed to be a thriller about a hotel clerk who accidentally sees one of his guests get killed and then becomes a suspect, but there isn’t much about it that makes it feel suspenseful.

The fact that the main character has Asperger’s syndrome adds a few new, underdeveloped parts to the story. Even though the cast is great and includes rising star Ana de Armas (Knives Out), who will soon be seen in the next James Bond movie, No Time to Die, the results aren’t fully satisfying on any level.

Bart, played by Tye Sheridan (Ready Player One, Mud), is the main character. He is 23 years old and works as a night receptionist at a hotel that is proud to hire people with disabilities, as the manager says at one point.

Since his illness makes him uncomfortable in social situations, Bart has come up with a clever, if evil, way to help himself.

He is very good with technology, so he has put several cameras in the rooms so he can watch the people in them whenever he wants. This lets him study how they act and copy how they talk.

One night, he sees a woman guest named Jacque Gray getting into a fight with a man. By the time Bart gets there, the woman has already been shot to death.

Even though the hotel manager told Bart not to touch the scene, he can’t resist putting his finger in a pool of the woman’s blood on the floor. He is, of course, the first person the police detective (John Leguizamo) looks at as a possible suspect.

Not long after that, Bart meets another guest, Andrea (de Armas), who seems fine with how awkward he is with people and acts flirtatiously toward him.

Andrea tells him that he reminds her of her brother, who is also on the spectrum, and the two become friends. Bart starts to think that her kindness is a sign of romantic interest, but it turns out that there are other reasons behind it.

Cristofer, who won a Pulitzer Prize for his play The Shadow Box in 1977, is directing his first movie since Angelina Jolie’s bad melodrama Original Sin in 2001.

He doesn’t seem to know what he wants to do. The premise is good enough for a thriller in the style of Hitchcock, but the murder and mystery about who did it seem to be almost an afterthought in the movie.

Some of the attempts to make people laugh, like Bart making wildly inappropriate comments to different salespeople, seem unnecessary and mean-spirited.

Even though the relationship that develops between Bart and Andrea is the most interesting part of the story, it doesn’t have as much drama as it could have.

The performers are not to blame at all. Sheridan makes the most of Bart’s limited emotional range by giving him subtle nuances that make him likable despite his social and moral mistakes.

Helen Hunt makes a strong impression as Bart’s mother, who will do anything to protect her “fragile” son, who spends most of his time in the basement.

De Armas is warm and attractive as a possible love interest, and Bart’s mother will do anything to protect her “fragile” son. Unfortunately, their good intentions aren’t enough to make up for the film’s inconsistent tone and story.