The Kings of the World Review: What Happens at the End of the Story? 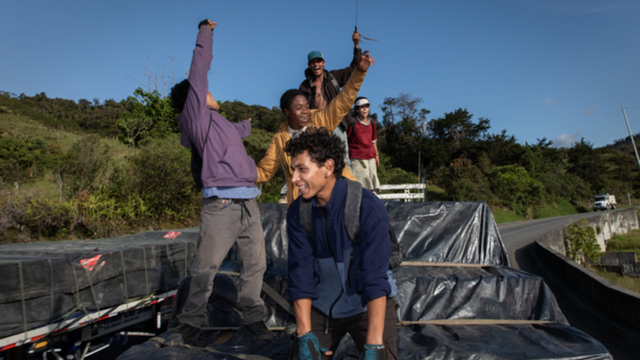 “The Kings of the World” by Laura Mora is full of breathtaking images. The road trip in Colombia follows a group of four teens as they attempt to begin a new life away from the violence and poverty they have grown up with.

As the film progresses away from the bustling streets of Medellin and into the misty Andean hills, Mora captures a gorgeous and illuminating view of this country in a change. Every frame begs to be studied for the way in which it conjures the promise of futures and liberties while also emphasizing the pitfalls and dangers associated with such possibilities.

One such early photo depicts Rá (Carlos Andrés Castaeda), shirtless and courageous, astride a white horse in the middle of a deserted city street. This is our first encounter with this young man.

Alone atop this untamed horse, he appears both majestic and boyish, like something from a fairy tale, if fairy tales could depict paupers in a city that still bears the scars of a decades-long war.

The horse, with its promise of wide-open plains and unobstructed horizons, gradually emerges as an appropriate repeating motif in Mora’s sequel to her 2017 sicario drama “Killing Jesus.” As with that award-winning film, Mora focuses not on the everyday violence faced by Colombians, but rather on its concrete repercussions on their lives.

Rá is one of many displaced people who had to live on the streets, but he may have found a means to escape this existence. The government has agreed to return Rá’s grandmother’s seized land (in accordance with restitution decrees aimed to assist Rá). A judicial triumph of this magnitude is the glimmer of hope Rá needs to envision a new life. In addition to his brother (Cristian David’s Culebro), he brings with him three street children (Brahman Acevedo, Davison Florez, and Cristian Campaa) whom he has adopted and cared for.

Their journey is risky, but not just for obvious reasons. They are five boys who play at being men or the men they have been trained and conditioned to be: violent, irascible, self-centered, and occasionally tender.

Indeed, their confrontations, particularly between Rá and Culebro, rapidly escalate beyond normal roughhousing; their hostility may easily become lethal. All of them travel with weaponry designed for both self-defense and preemptive assaults.

Mora, in collaboration with co-author Maria Camila Arias, draws a compelling portrayal of a gang of wild guys who battle to escape the script written for and by them. Boys like them are violent by nature and design.

Their lives are both valuable and tenuous. On Colombia’s steep, twisting country roads, their daring is nearly mistaken for fearlessness when they mount their bicycles on the back of freight trucks. Instead, it serves as a reminder that they have always lived dangerously. And there they have established a home, however temporary and fragile.

The film’s style appears to be in stark contrast to the story’s harsh edges (there will be bloodshed and deaths, you must know). Except that Mora and her cast deftly position this story on the border between a waking daydream and a nightmare. This opening image of Rá on the white horse is accompanied by his somber voiceover, which asks viewers to imagine a world in which all the men have fallen asleep and all the globe’s fences have caught fire.

Even before we witness him fending off intruders with a knife, cursing out government officers for their inactivity and inadequacies, or pinning his brother to the ground in righteous rage over lost inheritances, we get a glimpse of the vision this wounded young man puts his hopes on. Only a world devoid of men would grant him his independence. Unfortunately, he must continuously negotiate a world where he cannot avoid them and can only become one.

At times resembling a documentary (such genuine are the performances that Mora coaxed from these nonprofessional performers, and so subtle is David Gallego’s dynamic cinematography), “The Kings of the World” is shot with a pleasant gentleness.

There may be perils ahead, but Rá and his merry band of Lost Boys are firmly rooted in the conviction that any future is possible. Consequently, theirs is a story of ongoing survival, even as women contend with bigoted mobs and seek safety in makeshift brothels. Even with its pompous name, “The Kings of the World” is a quiet triumph as a mournful journey toward a brighter future. As a metaphor for a nation and its people, it is truly miraculous.