The Invitation Review: Why Did the Peddler Not Reveal His True Identity? 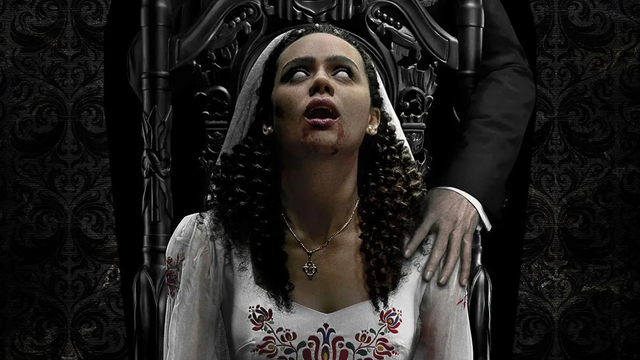 Despite director Jessica M. Thompson and screenwriter Blair Butler’s best efforts, “The Invitation” is too hackneyed for too much of its running time and too often laugh-out-loud funny because its plot relies on the age-old convention of a smart yet naive heroine who makes one bad decision after another.

Not surprisingly, some viewers may become so frustrated that they yell insults at the screen every time the protagonist in danger fails to take action in her own best interest.

Twenty-something New Yorker Evelyn (Nathalie Emmanuel of “Game of Thrones”) insists that everyone, including total strangers, call her Evie; she insists quite frequently, just so we don’t miss the fact that she is indeed a free spirit; and she ekes out a living as wait staff at catered affairs while pursuing her artistic aspirations by making ceramics.

She decides to look into her ancestry after discovering a DNA test in the swag bag she helped herself to at a fancy party for Find Yourself (apparently an upscale version of Ancestry.com). Naturally, this is the first of many blunders to come.

Oliver Alexander (Hugh Skinner), an aggressively ingratiating young Brit, finds time on a business trip to New York to contact Evelyn, well, excuse me, Evie, and deliver her some good news: He discovers that she is the improbable far-flung descendant of an old-money family — really, very old-money — and invites her to an elaborate wedding at the centuries-old family manor in Britain.

At first, Evie is doubtful, and not just because Oliver is obviously Caucasian and she is, well, Black. However, he eventually wins her over by explaining how one of her ancestors was the product of a scandalous affair back in the day, and how her relatives are now aching to meet her.

Yes, you guessed it: Evie makes Mistake No. 2 despite frank warnings from her best friend and sister wait employee, Grace (Courtney Taylor), who tells her she would be unwise to hang out with a slew of undoubtedly snobbish white folks.

It seems like the protagonist in “The Invitation” hasn’t seen very many films before. When the new guest is warned by the creepily authoritarian head butler, Mr. Field (Sean Pertwee), not to enter the library because “we’re remodeling,” it’s clear that strange things are going to happen at the magnificent estate, which looks like a Lego model from the outside. Certainly not.

A recent death is only alluded to; the guest bedroom’s windows are barred for flimsy reasons; there are noises in the basement and the attic; the maids have a nasty habit of disappearing; there is a snooty Amazonian woman (Stephanie Corneliussen) who does everything but grow horns to proclaim her evilness; there are monster manifestations that are brushed off as bad dreams; and there is a devastatingly

When Evie learns that Walter did more than a DNA test to verify her identity before extending his hospitality, she is understandably upset. However, after some convincing from the dreamboat, complete with side orders of poor-little-rich-guy posing, she is able to get over her anger, extend her stay, and—most importantly—strip for action. Things go from bad to worse from there.

Evie doesn’t find out she’s smack in the heart of a vampire coven full of extended families for a long time. Bloodsuckers in this area, however, can go about their business in broad daylight and take other precautions that allow them to remain undetected.

One vampire sneers, “There are so many misconceptions about our type.” Evie doesn’t appear too upset about getting bitten; rather, she’s infuriated by the arrogant comment, “For someone of your background, surely this is more than a leg up.” She’s already upset at the reaction she gets when she turns down immortality, but hearing “You modern ladies are so ungrateful” just makes her rage even more.

The slow pace makes the predictable events of the film’s first hour of gothic-thriller setup all the more irritating. Third-act twists where Evie stands up for herself are moderately smart, but they aren’t enough to restore interest in her.

Nathalie Emmanuel does her best to keep Evie from looking completely stupid, and there are a few knowing nods to “Dracula” here and there (please meet Jonathan and Mina Harker). But the real draw here is Thomas Doherty, or rather his distracting resemblance in a few scenes to Sean Connery during the “Dr. No” era. Maybe, maybe not; who can say? If a new James Bond is going to be a younger actor, they should go elsewhere.