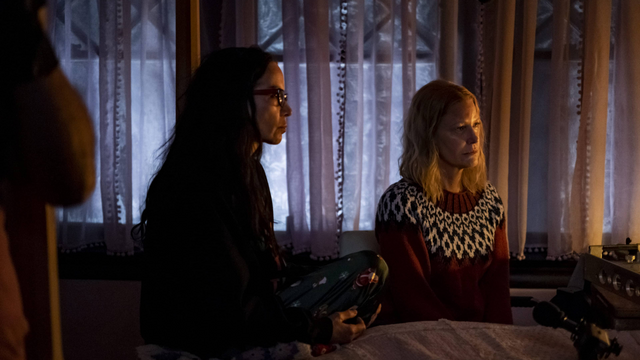 The opening scene of The Apology gives the impression that it’s the kind of film that would satisfy the needs of many lovers of the thriller and horror genres. It’s not much, but the bird’s-eye view immediately tells you that you’re in a remote, uninhabited area where yelling won’t get you far.

Director Alison Locke uses a single shot to create the tense atmosphere of the scene, which has us worried for the protagonist’s safety even before we see what’s going to happen. For this reason, it’s a shame that the film’s high points conclude there.

Darlene (Anna Gunn) is the protagonist of The Apology. Despite her daughter’s disappearance 20 years prior, Darlene has done her best to live a somewhat happy life.

On one Christmas Eve, her best friend Gretchen (Janeane Garofalo) brings her some much-needed happiness, and just as she’s about to settle in for a quiet night, an old friend unexpectedly drops by.

Some horror films are really masterpieces because of the way they force us to confront our own feelings of loss and mourning. Not much has changed for Darlene, and while we can empathize with her predicament, it appears that The Apology has no intention of fully immersing us in her world.

Only about three minutes of the story’s 90-minute length are devoted to getting to know the protagonist and following her through a typical day. Given how things turn out, it’s almost irresponsible not to elaborate on Darlene’s feelings.

Anna Gunn from The Apology resting her head on a pillow while sitting on a couch. The image was sourced from Shudder.
Related: This Christmas, Anna Gunn Begins Her Era of Revenge (Trailer for “The Apology”)

Because of the decision to keep the action confined inside Darlene’s home, the scope of the film is severely constrained. Although Darlene is trapped inside, the house never makes you feel like she is in imminent danger.

If you put your characters in the same situation over and over again, you’ll get bored and feel that the plot is stagnating. Darlene always seems to be on the stronger ground because of the lack of hiding places for the villain and the fact that he keeps turning up unarmed in a house full of deadly weapons.

The Apology also fails to improve upon the chemistry between its lead characters. As soon as Jack (Linus Roache) enters the picture, it becomes evident that these two have a romantic history, but the film never gives them a chance to fully explore their relationship: They skip over important details like how they clicked as kids, whether or not they trusted each other, and how the disappearance of the small girl has changed their dynamic. What is the point of putting two people in a room together if they aren’t going to have a heart-to-heart about how they feel?

Furthermore, the fact that the opponent of The Apology is never clearly identified is a major problem. Is this person a psychopath? Do they enjoy seeing their victims put up some resistance before they kill them? Eventually, it becomes clear that they are actually nothing of the sort, and instead seek pardon and a swift end.

Although this would explain why the movie’s killer never seems to have a backup plan, it makes for a worse plot overall because a killer who actively pursues their own death poses no genuine threat to anyone.

Darlene, the protagonist of The Apology, is repeatedly asked if she harbors any vengeful fantasies about the man who abducted her daughter. And yet, despite her protestations to the contrary, the film seems determined to prove her right.

The writer seeks to put the characters in dreadful, pointless situations for no other reason than to see them suffer. Not taking into account that she is a female heroine who has had more than enough hardship.

There is terrible storytelling in The Apology. It misreads the motivations of its protagonist, underplays the importance of character growth, and breaks the rules it sets for itself. The movie also fails to appreciate how much the stakes of the thriller are lowered by having a killer who wants to die paired with a victim who won’t kill.

Because it gives in to the revenge fantasy it so desperately wants to show, the film is ultimately just a final torture session for the film’s main character, who, because she maintains her integrity, is forced to watch in agonizing detail a tragedy she has been reliving in her mind for twenty years. The film seems to believe it has provided closure (“I am so lucky,” a character says with a smile after nothing is addressed), but all it really does is serve as a warning about potentially upsetting situations.