Stuck With You Movie Review: Who is the Guy at the End of Stuck on You? 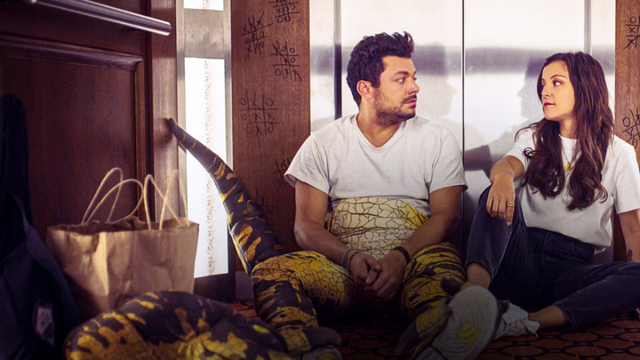 Single-location films are notoriously difficult to execute effectively. Due to the lack of visual variation, the picture must instead rely on performance and narrative to carry it through. Cube is a fantastic example of how to accomplish this in the horror genre, but 12 Angry Men is an amazing classic.

Stuck with You can not even come close to the quality of those films, and in multiple instances, the film compromises its fundamental concept in order to liven things up. That is not necessarily a negative thing, though, as this quick but entertaining comedy contains some solid material.

Two strangers, Gael and Hannah, are stranded in an elevator on New Year’s Eve; the plot is quite straightforward.

Thankfully, assistance will arrive… tomorrow morning. Due to the lack of cell phone reception, the couple is unable to communicate during the celebrations. Eventually, they begin to discover more about one another. As a side note, Netflix’s description for this film is a major spoiler, so I recommend avoiding it if at all possible.

MUST READ: The Black Phone Movie Review: Does Finney Get Caught While Going Up the Stairs?

The two are practically polar opposites, and over the course of an hour, we discover more about how they ended up sharing an elevator. The film accompanies these expositional passages with one of two techniques, both of which are effective.

Following an illuminating chunk of exposition, the first has a humorous joke or slapstick incident.

The other observes the elevator doors open, and the couple then reenacts significant incidents from their past. This does work rather well, particularly when Hannah is discussing her mistrust of males, but it also means that this is not a normal single-room film.

The age-old “opposites attract” theme is prevalent in the screenplay, which is otherwise rather good.

The jokes are a mixed bag but mostly consist of slapstick or physical humor. There is also some potty humor that doesn’t really work, as well as a few wordplay jokes that do, but the humor is likely to be subjective across the board.

Stuck With You is a pleasant way to while away an hour if you’re in the mood for a light and straightforward romantic comedy.