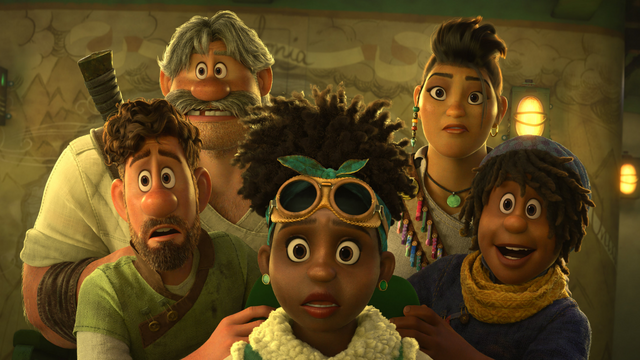 The inhabitants of “Strange World” are among the most realistic and fully developed Walt Disney Animation Studios have ever portrayed.

Consequently, both the characters and the setting make this “Journey to the Center of the Earth”-style adventure film colorful and diverse in all the best ways.

“Strange World” focuses on the civilization of Avalonia, which is surrounded by “an impenetrable ring of mountains.” A sudden (and somewhat unexplained) shortage of resources forces three generations of the courageous Clade family to confront the unknown.

Grandpa Jaeger (voiced by Dennis Quaid) and his more cautious son, Searcher, attempt to forge a direct path through the formidable mountains (Jake Gyllenhaal). A quarter-century after that mission goes awry, Searcher sets out again, this time underground, with his own son Ethan (Jaboukie Young-White).

Down in the depths of Strange World, they discover an astonishing ecosystem comprised of bubblegum-pink trees and creatures resembling sashimi.

It’s a dazzling new environment that capitalizes on the fact that we don’t know whether we’re in inner space, outer space, or somewhere else entirely. It’s full of Dr. Seuss-esque flora and fauna with bizarre textures and colors.

The same can be said for the Avalonian characters, who come in a wide variety of sizes, hues, and configurations, from the three-legend pet dog Legend to Ethan’s multiracial family.

After Searcher discovers a glowing plant he calls “pando” in the film’s prologue, Avalonia is rendered in a visually appealing, Ben-Day-processed style that gives the film an early pulp comics vibe.

Mission accomplished with respect to Searcher: Pando is a renewable energy source, also known as “green energy.” What could be better than that? The searcher is more suited for farming than roughing it like his father, which keeps the adventure-averse family man busy for the next 25 years — until the Pando crop fails and Avalonia president Callisto Mal (Lucy Liu) recruits them for the expedition to Strange World.

Gyllenhaal excels at portraying the overprotective parent who is progressive enough to recognize he doesn’t want to be the controlling dictator his own father was.

When Searcher instructs Ethan to remain at home, it should come as no surprise that the boy disobeys and stows on the Pando-powered airship as it departs to preserve the valuable plant upon which Avalonia depends.

Once they reach Strange World, Ethan’s personality proves to be an asset, as the human protagonists encounter species never before encountered: Day-Glo pterodactyls, pink pancakes that float in the air, and land masses that walk on elephant legs. Ethan adopts a blue blob like an amoeba and names it “Splat” although his father is quite wary of the strange life forms they discover.

It is a credit to the animators that this creature, which stretches like a sticky-hand toy and sounds like a kazoo, is nevertheless endearing despite lacking googly eyes (or anything remotely resembling a face). And guess who they find down there? It’s Searcher’s long-lost father, releasing all sorts of fatherhood issues.

Clearly influenced by Jules Verne and H.G. Wells, writer, and co-director Qui Nguyen focuses on the father-son relationships between these characters.

There are also environmental themes, which set up a major third-act twist, but the film’s organic message — instructive without being preachy — is: Teach your children well… and you may end up learning from them.

Graham Nash’s folk-rock classic would have made a terrific theme song if the directors hadn’t commissioned a John Williams-style orchestral music from composer Henry Jackman (who instead provides the ridiculous family anthem “They’re the Clades!”).

With “Treasure Planet” on one hand and the majority of princess films on the other, Disney’s animated film catalog demonstrates that the studio alternates between films that are predominantly geared toward boys or girls.

“Strange World” may focus on helping its male characters work through their troubles, but there is no shortage of strong female role models or people of color, such as Clade matriarch Meridian (Gabrielle Union).

In reality, this may be the only Disney film (excluding “The Jungle Book” and “Zootopia”) in which characters from diverse backgrounds live naturally.

It appears that Disney has recently discovered that the families, friend groups, and larger society surrounding them are not homogeneous and that the studio has been out of touch by limiting them to distinct cultural bubbles.

This is not a criticism of “Mulan,” “Moana,” or “Enchanted,” which each made pioneering efforts to widen Disney’s horizons, but rather an enthusiastic endorsement for showing a world in which multiple identities coexist more often than they clash.

By far the most overdue of these improvements is Ethan’s (Jonathan Melo) obsession with a youngster named Diazo… and nobody objects to it.

Although it is quite obvious that Diazo already understands and shares Ethan’s thoughts, the main drama this subplot provides is whether Ethan will find the courage to tell Diazo how he feels.

Sure, some countries would lose their minds over a gay character in a Disney film, which makes it all the gutsier that “Someday My Prince Will Come” producer Roy Conli decided it was time to expand the studio’s concept of romance.

It is normal for some children to feel how Ethan does, just as it is normal for his mother to be a pilot. Those who believe otherwise inhabit a peculiar universe.