Stonehouse Review: Matthew Macfadyen is Delectable in a Real-life Tragicomedy 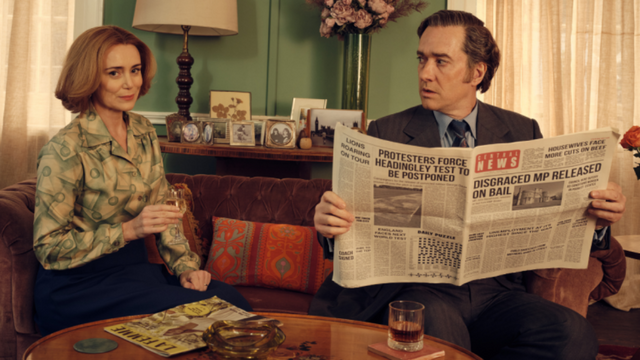 BritBox’s latest offering, Stonehouse, a political drama starring Matthew Macfadyen as a member of Parliament who faked his death in the 1970s to avoid being prosecuted for, among other things, bad business dealings and taking money from the Czech government to serve as a spy, seems keenly aware of this adage.

The new three-episode miniseries, based on a true incident, dramatizes one of the strangest occurrences in British political history, bringing to light something that many outside of Britain may not be familiar with but will be captivated by, despite the execution being a bit dry.

Stonehouse, written by John Preston, the author of A Very English Scandal, is typical British political fare, steeped in paisley and burnt orange of the 1970s and topped with wigs that make you wonder what happened to fashion before Aqua Net and MTV were famous. Similar to many of BritBox’s previous offerings (or most crime dramas to come out of the UK, really), the series is filled with dirty, underhanded transactions and suspicious characters galore, but it stands out due to its protagonist, who is the greatest criminal the world of British politics has ever seen.

It would be reasonable to suppose that someone who fakes their own death to avoid criminal charges would be fairly intelligent, but this is not the case. Stonehouse thrives on its protagonist’s incapacity to be anything other than absolutely inept, with the first episode rapidly degenerating at the twenty-minute mark. Stonehouse is incapable of carrying through any strategy he devises, and the series is akin to watching a car crash in slow motion, with youngsters peering out the windows as their parents warn them not to for the sake of everyone’s dignity.

There are echoes of Macfadyen’s performance in Succession in John Stonehouse, and possibly with a good cause since their shady business transactions and their disastrous outcomes bind both characters like the world’s worst handcuffs.

He can hardly keep his head on straight, and if I didn’t know better, I’d be amazed that a man like Macfadyen’s Stonehouse made it into Parliament in the first place. Macfadyen’s monologues are some of the better sections of largely witty dialogue, but he can’t walk the walk when it comes to supplying information to the Czechs or constructing a new identity to live under in Australia.

And yet, despite the fact that Stonehouse is clumsy and a moron, he reveals a slimmer, more sinister side the instant he faces the threat of penalties for deeds he is solely responsible for, much like any man caught in a hilariously foolish error.

It is impossible (at least for me) to feel any sort of pity for such a man, especially as the play progresses, but it is easy to be morbidly fascinated by his demise — one that you know is coming, given the actual ending of John Stonehouse’s disappearance.

Any sliver of sympathy Macfadyen would have acquired merely by being an amazing actor (I have a deep affection for his Mr. Darcy) gets eked out as the series progresses, especially whenever he interacts with his wife, Barbara, portrayed by Macfadyen’s real wife and fellow actor Keeley Hawes.

Whereas it is impossible to sympathize with Stonehouse, I found myself rooting for Barbara, and while I’m aware that Hawes and Macfadyen have been happily married for almost twenty years in real life, I take great pleasure in Hawes’ performance as a woman so scorned that she’s frequently one wrong word away from ripping her husband’s head completely off his shoulders. (And perhaps appropriately so.) While Stonehouse is obviously a vehicle for Macfadyen — and a successful one at that — Hawes shines just as brightly in the limited series, bringing the bite that her husband’s bumbling, inept MP lacks and making you wish the best for Barbara while eagerly anticipating Stonehouse’s inevitable demise. She is a victim and a voice of reason in equal measure, and her righteous rage propels the series ahead, as sharp and engaging as she has been throughout her whole career.

Kevin McNally also delivers an impressively deceptive performance as Prime Minister Harold Wilson, whose sincerity seems trustworthy until one realizes that it is merely the result of his satisfaction with his political party, which wanes over the course of the series and forces him to engage in almost as nefarious dealings as Stonehouse’s poorly-faked death.

Coupled with Macfadyen and Hawes, along with Emer Heatley as Stonehouse’s mistress Sheila, the performances are what propel the limited series, which offers little more than what could be found via a Google search about Stonehouse’s crimes — in fact, the final episode’s five minutes are equivalent to three-quarters of the disgraced politician’s Wikipedia page.

To see a bit more of the nitty-gritty, I wish these miniseries were a tad bit longer, perhaps with an additional episode on top of the three we got. Stonehouse’s scheme to fake his own death and the ultimate repercussions of his trial felt a tad hurried, however, I’m certain that expanding this to a five (or more) episode series would have made me feel the exact opposite. It moves at a speed as weird as the genuine narrative it’s attempting to convey, and Preston’s work on this series feels remarkably similar to that of A Very English Scandal, which is not necessarily a bad thing.

Stonehouse fits in well with the rest of BritBox’s offerings, including its ITV-ported siblings such as Honour and The Pembrokeshire Murders, and is entirely serviceable for a one-day binge, even though it adds nothing to the genre. Unsurprisingly, Hawes and Macfadyen are an unstoppable combo, and if nothing else, the series serves as an easy, post-Christmas watch with your grandparents, before TV actually begins to pick up steam for the year.