Something From Tiffany’s Ending Explained: What Happened at the End of the Story? 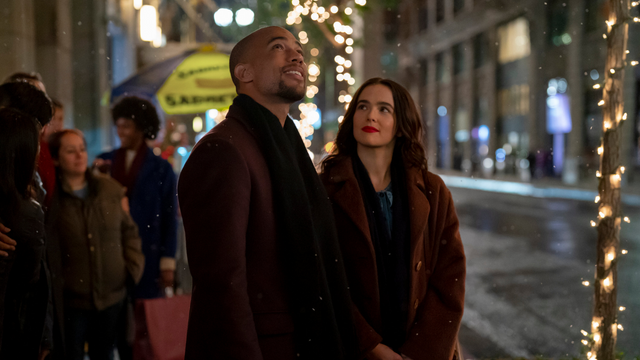 Adapted from Melissa Hill’s novel, the romantic drama film “Something from Tiffany’s” on Amazon examines the seemingly perfect lives of two spouses.

This romantic comedy centers on Ethan, a single father who is set to propose to his girlfriend, and Rachel Meyer, a young and intriguing lady who is hesitant about her relationship with Gary Wilson.

Ethan Greene purchases a ring from the film’s namesake jewelry store with the intention of proposing to Vanessa.

Additionally, Ethan and Gary mistakenly switch their matching shopping bags in the same store. Due to the miscommunication, Vanessa receives a pair of earrings that were clearly purchased for Rachel, while Rachel receives an engagement ring that was purchased for Vanessa.

Due to the misunderstanding, Rachel and Ethan become friends, and as a result of their mutual attraction, they learn what true love is like. The unexpected encounters and burgeoning desires between the two protagonists create a semi-touching love story.

Something from Tiffany’s Ending Explained

“Something from Tiffany’s” is a self-aware Christmas romantic comedy that is not particularly deep but has just enough snow to make you snuggle in front of the television on a Friday night.

The plot hinges on a misunderstanding, as is customary for Christmas-themed films. Rachel receives an unexpectedly expensive (and shocking) gift from Gary on Christmas, a very huge engagement ring that she had not anticipated.

Ethan, on the other hand, is astonished to see Vanessa open a box of earrings rather than the enormous engagement ring that Daisy had selected.

Realizing what had occurred, Ethan decides to go obtain a confession from Gary and retrieve his ring; however, he can only do it through Rachel.

When he encounters Rachel, he informs her that he wishes to check up on Gary and see him in person. She invites him to join them for dinner, and he gladly accepts.

Rachel receives a phone call from Gary, who informs her that he will not be able to attend the dinner. Upon Ethan’s arrival at the dinner, he is surprised to see the ring he had purchased for Vanessa on Rachel’s finger.

Unable to tell her the truth and crush her heart, he asks her about Gary and whether or not “he’s a wonderful man.” Rachel responds to his questions with an unduly lengthy explanation to demonstrate that he is and to demonstrate her undying affection for him.

Rachel, who visits Tiffany’s where the products were purchased to learn how to care for her new property, is confronted with the reality that the ring was never Gary’s and that he never intended to propose.

When she informs Gary that she is aware of the reality, he initially attempts to play it off as a slip-up and subsequently apologizes for the error. She is deeply offended and asks him if he really wants to marry her, to which he responds affirmatively and suggests they celebrate their engagement after returning the ring.

Rachel grudgingly agrees since, according to her best friend, she is a lover of romance but not of spectacle. In the interim, Daisy and Ethan pay Rachel a visit at her request, and she and Daisy share a wonderful moment of connection.

Rachel explains to Daisy how she felt when she lost her mother at approximately the same age as Daisy, and the two then bake bread together. Rachel then apologizes to Ethan and gives him some bread to share with Vanessa and Daisy at home.

Ethan proposes to Vanessa, to his astonishment (and dismay) that Rachel has hidden the ring in the bread. Rachel ends her relationship with Gary after discovering that he lied about their initial meeting.

Vanessa discovers the ring was Rachel’s idea and asks Ethan why he’s been hiding things from her. When he realizes what he’s been doing, he admits that he feared she would be embarrassed if she knew he wanted to write again since he was a failure. Leaving Rachel and Ethan effortlessly single for one another.

As a Christmas film, “Something from Tiffany’s” lacks a villain, but of course, Gary is despicable and a liar, and Vanessa and Ethan coincidentally no longer want the same things.

He desires to reside in New York, however, she detests the city and would never return. Daisy suggests that this provides Ethan with the perfect reason to go chat to Rachel. The film concludes with a one-year time leap, during which Ethan proposes to Rachel with Tiffany’s ring, and she accepts! Indeed, a Christmas miracle.