Something From Tiffany Movie Review: A Stereotypical Romance Comedy With No Chemistry Between the Leads 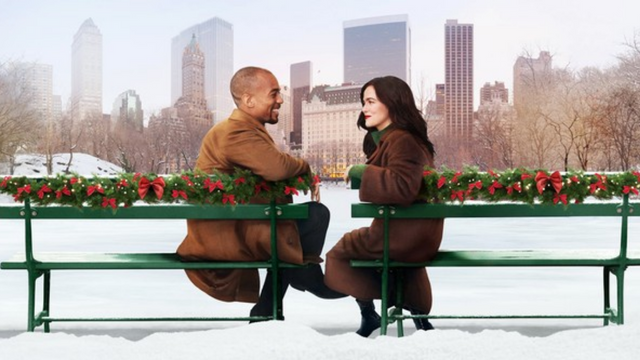 Adapted from Melissa Hill’s novel, the romantic drama film “Something from Tiffany’s” on Amazon examines the seemingly perfect lives of two spouses. This romantic comedy centers on Ethan, a single father who is set to propose to his girlfriend, and Rachel Meyer, a young and intriguing lady who is hesitant about her relationship with Gary Wilson.

Ethan Greene purchases a ring from the film’s namesake jewelry store with the intention of proposing to Vanessa.

Additionally, Ethan and Gary mistakenly switch their matching shopping bags in the same store. Due to the miscommunication, Vanessa receives a pair of earrings that were clearly purchased for Rachel, while Rachel receives an engagement ring that was purchased for Vanessa.

Due to the misunderstanding, Rachel and Ethan become friends, and as a result of their mutual attraction, they learn what true love is like. The unexpected encounters and burgeoning desires between the two protagonists create a semi-touching love story.

The breathtaking jewel-toned opening sequence evokes an exquisite, timeless New York City in December. Dean Martin’s rendition of “I’ve Got My Love to Keep Me Warm” plays as Christmas decorations and snowflakes shine in the air.

The narrative of the Christmas-themed romantic comedy is reminiscent of a fairy tale. In addition to overcoming enormous obstacles in order to find love, the protagonists are emotionally relatable. Consequently, the supposedly fairytale-like romantic drama between Rachel and Ethan appears grounded in reality.

The film features all the characteristics of a Christmas romantic comedy, including two gorgeous primary protagonists whose relationships are about to alter, two unlikable wives, and a boatload of cheesiness in between.

However, the picture falls short due to a lack of chemistry between the two protagonists and a narrative that is not fascinating enough to attract audiences.

In addition to the lack of chemistry between the leads, one of the biggest flaws with this modern romantic comedy is the dearth of interesting, multidimensional characters. Everyone in this film finally appears more like an idea than a real person.

The turbulent protagonist, the poisonous, irresponsible fiancé, the single father with a great heart, the clever child who is mature beyond her years, the supporting yet sarcastic friend, and the fiancé who doesn’t belong.

The play explores passion and friendship, as well as the beauty and excitement of Christmas and the upcoming New Year.

The film also addresses the fragile nature of relationships and reveals what is genuinely necessary for a relationship to flourish. However, the key characters are not given sufficient time to develop, and their connection is portrayed in a manner that renders the film extremely dull.

The audience anticipates seeing how the couple will continue to develop their connection. Unfortunately, there is not much time allocated for audiences to learn about the pair and how they got there.

Regarding secondary characters, the Christmas film is devoid in content. The drama makes not attempt to give any of the characters more than one dimension.

In addition, no time is spent exploring the first spouses of the perfect marriage unless it is necessary to show that the characters are jerks, self-centered, heartless, or a combination of these traits. Gary’s lack of likable characteristics makes him easier to overlook, whereas Vanessa does not seem beyond redemption. Still, she is disregarded.

Rachel and Ethan are portrayed by Zoey Deutch and Kendrick Sampson, who give excellent performances.

Leah Jeffries also performs admirably and is conscious of the significance of making her character likable. Despite the hardships endured by both characters, the father-daughter bonding scenes between Daisy and Ethan are sparse and, as a result, feel superficial.

Since it is a romantic comedy, the plot of Something From Tiffany’s is straightforward, predictable, and, to some extent, comforting. New York is depicted nicely, the holiday-themed music is incredible, and Rachel’s attire is exquisite.

Sadly, however, due to awkward silences and extended pauses between the key actors, as well as a lack of connection between them, the film is unable to transfer this beauty to its writing and plot, which are both lackluster.