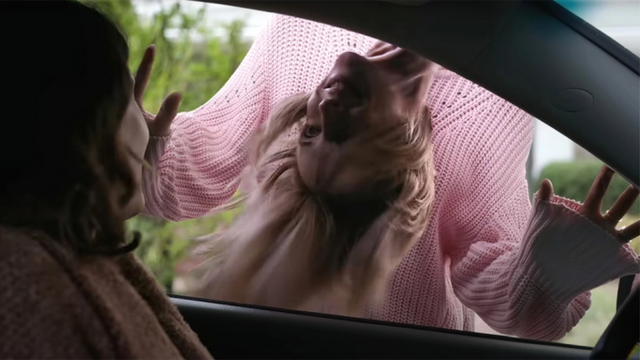 After films like Ring (1998) and Ju-On: The Grudge (2002) terrified audiences, J-horror, or Japanese horror, had a profound effect on the genre.

Thereafter, American remakes were produced, but the bone-chilling otherworldly beings continued to inspire creative thoughts as well. Smile by Parker Finn evokes moments of dread and hilarity, but it never quite finds its footing to unite these moments into a journey.

Dr. Rose Cotter (Sosie Bacon) is a hospital-based therapist who strives to assist everyone who enters the emergency room in need of her assistance.

However, she discovers a particularly bizarre case involving Laura Weaver (Caitlin Stasey), who implores her for assistance against a supernatural creature that won’t stop pursuing her in the shape of a menacing grin and a human appearance. She commits suicide in Rose’s presence, irrevocably altering her life.

Rose is unable to forget the eerie smile on Laura’s face as she passed away in Smile. Soon, she begins to feel the same presence-indicating symptoms.

Rose must confront her own problems if she expects to find a solution to save her own life and prevent this supernatural monster from claiming more innocent lives.

Smile is comprised of two distinct tones incorporated by Finn. The beginning is fairly dreary and gloomy, but the plot grows increasingly humorous as it unfolds.

The screenplay’s premise featuring unsettling smiles is unquestionably infused with a deliberate dark sense of humor. Smile, however, is unafraid to go full camp in its second half, completely abandoning all of the unnerving suspense it generated in the first half.

Rose desires to assist her patients, frequently forsaking self-care and other elements of her personal life in order to assist more people. Makeup can only conceal the dark circles under her eyes for a limited time.

The hospital’s bureaucracy prevents her from giving her patients the correct care, as authority figures view them as “crazy” and undesirable by society. Nonetheless, this physician recognizes their significance and is committed to putting patients on the path to recovery.

Smile is fundamentally about the human road to overcoming trauma and the social understanding of mental illness.

As a therapist, Rose is accustomed to looking in from the outside, but she has always ignored her own troubles, which have the effect of isolating her from her closest friends and family.

One of her harmless patients repeatedly repeats a mantra about the inevitability of death, but now that Rose’s time has arrived, she is going to learn the actual horrors of trauma’s ugliest manifestations.

It Follows is the most recent film to be compared to Smile, although its connection to J-horror is far more pronounced. Similar to earlier flicks, the dread is most powerful when veiled in shadows.

The MPAA has given Smile a rating of R for violent content, gory imagery, and profanity. People are seen slashing, stabbing, and setting themselves and others on fire. A dead cat is displayed. There are corpses with a range of gruesome wounds.

Finn’s direction makes excellent use of the darkest areas of the screen, resulting in a number of scary moments. The more the film brings its horrors into the light, the more it transforms into a comedy.

Smile is a jump scare extravaganza, utilizing fake-out moments and genuine fears of peril to keep the audience on its toes.

Unfortunately, the most successful and inventive moments are featured prominently in the trailers, detracting from the cinematic experience.

Sometimes, Cristobal Tapia de Veer’s score is evocative of Christopher Young’s work on Sinister, with scurrying and unsettling tones that raise the hairs on the back of the neck.

The smiling face replaces the usually masked killer, giving the antagonistic figure a constantly shifting appearance that creates the idea it could come anywhere. The grin gag will remind viewers of Blumhouse’s Truth or Dare, albeit in a somewhat less dramatic manner.

Smile is at its finest when employing the “less is more” philosophy, letting the dark gaps to envelop the spectator in dread. A notion that may have been much more horrifying is muddled by predictable plot beats and an uneven tone.