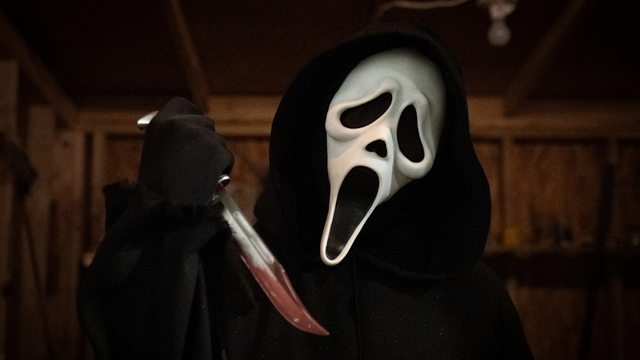 It is neither a reboot nor a sequel to “Scream,” the groundbreaking 1996 meta-slasher film with which it shares a title. The new film is a requel, a term the film diligently defines.

A requel is an extension of a series that straddles the line between the past and the present, between something fresh and new and a reverence for the heritage characters that gave the original its spirit. (In this case, this means Courteney Cox, David Arquette, and Neve Campbell are reprising their roles, which are not token ones.

The young characters in the original “Scream” were living out their own schlock horror movie, complete with a masked killer who was like a mascot of death (he was like Edvard Munch’s The Scream turned into costume-shop kitsch), and they drew on the rules they’d absorbed from endlessly watching slasher films: how you’re fooled into thinking the killer is this person when it’s really that person, and so on.

This type of content is abundant in the new “Scream.” A teenage partygoer enters the basement to retrieve some beer, followed by a companion who asks, “Don’t you know it’s dangerous?” At one point, guideline number one for identifying suspects is stated to be “Never trust the love interest.” Nonetheless, if that were all there was to the new “Scream,” we would have to call it a retread.

The original “Scream” was released 26 years ago, and it was marketed to the VCR generation, or perhaps the Cinemax generation — that is, the first moviegoers who’d grown up devouring schlock horror sequels like M&Ms, dissecting their formulas and mechanisms, and reveling in the rules those films created through sheer repetition.

What has therefore changed for this generation? According to “Scream,” the Internet has spawned a new school of fan culture in which movies are still painstakingly studied and deconstructed, but now with a primordial skepticism towards how and why they were created in the first place. Film enthusiasts are obsessed with sequels, but they are also aware that most sequels are terrible.

In the new “Scream,” which is once again set in the California town of Woodsboro, there is considerable discussion on the horror franchise that began with “Stab,” a film based on the Woodsboro massacre (it was introduced in “Scream 2”). It appears there have been seven “Stab” sequels, and the majority of them are terrible.

Mindy (Jasmin Savoy Brown), the most cinematically savvy character, explains all of this to us, admitting that the only good “Stab” film was the original. I thought “Scream 2” was actually pretty terrific, but I’ll take the film’s self-satirical point: that slasher sequels, even heavily ironic slasher sequels that build on a picture as spooky and amusing as “Scream,” have an inherent we’ve-seen-it-before cheesiness.

The new “Scream” may be the first horror film to ridicule fan service by providing its own fan service. Is it fun? Generally, yes. Surprising? It continues fooling you about who the murderer is, and playing this guessing game is part of the film’s tension, but its suspense is built on the film’s arbitrary ability to stay one step ahead of us.

The new “Scream” is approximately as good as “Scream 2” was; it maintains the thrill of the first “Scream” afloat like a blood-soaked balloon, but the film is just a series of variations on an old sleight-of-hand template. Except that the concept is now sufficiently old to feel new again. (This is an element of the requel formula.) “Scream” does not reinvent the playbook for “Scream.” It recycles them ardently and condescends to them in a humorous manner.

Matt Bettinelli-Olpin and Tyler Gillett, who made their start directing pieces for the 2012 cult horror anthology “V/H/S,” directed the film. Tara (Jenna Ortega), alone at home like Drew Barrymore in “Scream,” keeps getting phone calls from the killer, who wants to talk about scary movies and play a game.

However, Tara is an indie-film snob who looks down her nose at slasher films; her idea of a scary movie is “The Babadook.” As the murderer gives her a test she cannot pass, she yells out, “Ask me about ‘It Follows’!” Ask me about the film “Hereditary”! “Inquire about “The Witch”!” It is the “Scream” prologue as discussed on message boards.

The killer, Ghostface, strikes Tara, but she lives, and the film’s cast of friends and suspects is soon presented. Sam, Tara’s older sister (Melissa Barrera), appears to be a safe choice for innocence; nevertheless, we learn that she was a drug-addicted black sheep for five years, abandoning her family after discovering who her biological father was. (Hint: It’s a member of the original “Scream” cast, though perhaps not as terrifying as David Arquette.) Sam is a sister who is both protective and plagued by insane flashbacks.

Her lover is Richie (Jack Quaid), who is so tall, affable, and curly-haired in a Judge Reinhold-Esque manner that it could be him. (In these films, the character might be anyone.) Mindy, immersed in her film-fan-in-chief arcana, is the type of individual whose hyperrationality may be a mask. Amusingly, she is seated on a couch with Ghostface directly behind her while watching “Stab” and yelling at a couch-bound character to “Turn around!” (because Ghostface is behind him).

Who would shout “Turn around!” to Mindy? I could be wrong, but I don’t see the prospective audience for the new “Scream” as a talk-back-to-the-screen generation; that’s uncool. Obviously, one of the reasons people seek out scary movies is to have their cool ripped out from under them, but “Scream” is not a particularly terrifying film.

The suspense is stretched out like taffy. The film does its best to incorporate Cox, Arquette, and Campbell into the heart of the action, but they inevitably feel like tribal elders who we’re supposed to respect because of their “Scream” pedigree, even as that dynamic is satirized with a reference to reviving the “Halloween” franchise with Jamie Lee Curtis. The film “Scream” is deft enough to let you see through its tactics. However, I am uncertain as to whether this is cleverly postmodern or simply apparent.

Is It Worth Watching the Movie Scream?

Scream kept us on the edge of our seats while also providing us with laughter and some of the most violent deaths witnessed in the series to far. While it may not live up to the original, we are pleased to report that it is superior to the majority of sequels. We are glad to award Scream a 4/5 rating.

Why is the Film Scream So Good?

“Scream” by director Wes Craven evokes instant nostalgia in horror fans, not just because of its distinctive ’90s slasher style, but also because of its playful nods to the genre’s classics.

Is Scream a Humorous or Frightening Film?

But are the Scream films frightening? Due to the humorous dialogue, ridiculous scenes, and campy deaths in each of the five films in the slasher franchise, the majority of people would vote no. Despite the fact that most viewers will not find these flicks frightening, they are incredibly entertaining, which counts for a great deal.

Why is the Scream Controversial?

When Edvard Munch’s The Scream was initially displayed in Norway in 1895, it drew harsh criticism. Some viewers saw the central figure, which stands on a bridge in a sea of whirling color, as a representation of the artist’s frail mental condition.