Saint-Omer Review: It is a Complicated Courtroom Drama About Much More Than the Crime at Hand 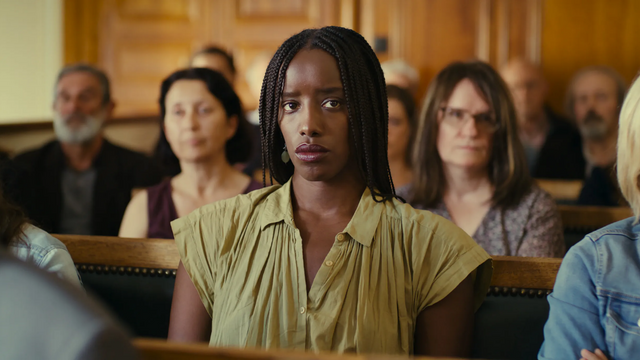 There are numerous legal dramas available. This past year on television, amazing shows like Better Call Saul coexisted with mediocre shows like The Lincoln Lawyer. There have been intriguing historical films, such as Argentina, 1985, in the history of cinema. All are centered on the numerous tragedies that occur during legal hearings.

Each in their own way grapples with the banality and folly of investing our aspirations for justice in systems ill-equipped to fix what is already broken.

Yet none surpass Alice Diop’s enormous first narrative feature film Saint-Omer. The film, which debuted at the Venice Film Festival, discloses its most unsettling facts gradually, despite appearing to lay all its cards on the table early on. In doing so, it forces us to confront profound truths we would otherwise overlook.

It all begins and concludes with the story of Rama (Kayije Kagame), who awakens one morning from what appears to be a personal nightmare but could also be the agonizing recollection of another. She seeks to ignore her fear in order to proceed with the rest of her day. This is a reoccurring theme in the narrative since she is reluctant to share her life with her family.

She then packs a backpack and boards a bus to observe the trial of Laurence Coly (Guslagie Malanda), a Senegalese woman on trial in Saint-Omer, France, for what feels like several days. Rama is only observing for the purposes of a book she plans to publish. Nonetheless, there are numerous reservations and creases, which the film spends its time deftly untangling.

At the outset of the proceedings, the “truth” is presented. We find that Laurence abandoned her child to die, a fact she admits to, but then we see how this child’s death was caused by a thousand wounds over numerous years that ultimately proved fatal.

What follows is a succession of moments characterized by uninterrupted monologues that are both basic and utterly heartbreaking to behold. It is an enthralling courtroom drama in which the pretense and spectacle we have become accustomed to seeing in other depictions of the legal system have been eliminated.

Aside from the initial premonition, there are no flashbacks to what occurred in the film, which frequently has the air of a play. Instead, Diop immerses us in the environment almost exclusively through dialogue.

She relies on Malanda to deliver a subdued yet steely performance in this. As every part of her character’s existence is scrutinized and probed, the way in which she brings each line to life creates a multifaceted, uncompromising experience.

It displays Laurence’s complete and total lack of compassion in every term of the procedure. In a brief moment where the legal and existential weight on her shoulders proves to be too much following the testimony of a purported expert who makes numerous racist remarks, she sits down before being forced to stand.

While the film’s central theme is how dehumanization is ingrained in the foundations of such a system, it is a quiet, genuinely empathetic one. This is a rare occurrence that contradicts the typical course of events, in which a courageous lawyer is given the spotlight. Instead, it focuses almost exclusively on Laurence via Rama’s perspective.

This makes sense, given that Diop was personally drawn to and attended the trial that the play was based on. Even though she doesn’t talk much, Rama is a significant presence in the picture, and what she pays attention to says so much.

At a crucial moment, the debates of the proceedings fade into the background as she simply looks at the determined Laurence, who turns and smiles slightly in acknowledgment.

It is the only moment in the entire film that the two establish eye contact. It is utterly shattering when combined with Thibault Deboaisne’s initially subdued but progressively overwhelming soundtrack. While everyone else seemed to be chatting around Laurence, even discussing her mental condition and past as if she were not present, Rama was the only one who actively sought her out.

The moment is traumatic because she sees herself, her mother, and her life reflected in the mirror. Despite the fact that such episodes almost detach themselves from the entire process, whose end seems nearly foreseeable, the humanity of it makes it no less terrifying.

In this situation, there is no mystery to be solved, and maybe more crucially, there is no sense that anything will lead to justice. After all, by the time everyone has entered this courtroom, so much has already gone awry and cannot be fixed. This is important to every aspect of the film, with Diop calling into question the foundation of the stories we tell ourselves about justice and the people they leave behind.

Saint-Omer is more truthful about what actually occurs, and as a result, it is eerier. This is in contrast to the sweeping tale of justice triumphing that we’ve seen countless times. We are embroiled in a process that appears to be harsh for no reason, vicious for no reason, and destined to create greater injustice.

This is precisely the idea, as Diop delivers an experience that most closely resembles her previous documentaries in its reserved, reverent patience. Diop’s attempt to highlight significant realities that would otherwise be neglected is marked by a refreshing lack of conformity. From the deluge of testimony to the stark manner in which it is presented with Deboaisne’s unearthly score, it is the tiny moments that bring this to life.

Even with a final statement that is part of a desperate attempt to find salvation, Diop makes it clear that this will never be sufficient. Even though we don’t see the conclusion, the effect it has on Mana allows us to comprehend the loss more deeply than if it had been explicitly stated. Saint-Omer discovers a larger and more profound truth than any previous film of its genre in a world where justice is scarce.