Saint-Omer Movie Review: It Brings the Crimes of Medea Into the Modern Courtroom 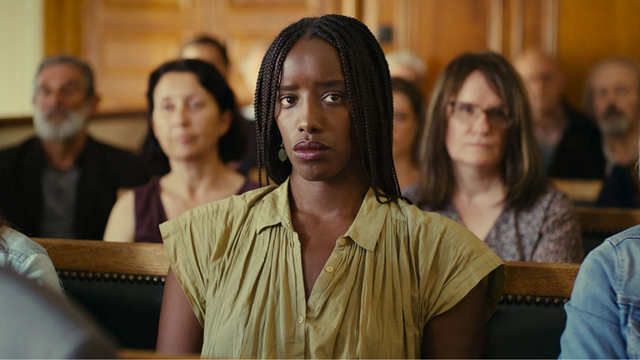 With Saint-Omer, documentary filmmaker Alice Diop makes her first narrative feature film. Her assessment of current French society in her earlier works serves as a useful addition to the ongoing legal drama.

The picture is elevated by Diop’s depiction of painful parenting and the outstanding performances of Kayije Kagame and Guslagie Malanda. Saint-Omer poses several intriguing concerns, even if some of its presentations keep the spectator at a distance.

Rama (Kagame) is a young author preparing to write her next work. She chooses to attend the trial of Laurence Coly (Malanda), who is accused by the court of murdering her 15-month-old daughter by leaving her on a beach in northern France during high tide.

The case appears to be fairly straightforward, but the judge wants to know why the accused committed the crime. However, Laurence does not know the answer to this question and wishes to discover it for herself.

Rama becomes further affected by Laurence and the witnesses’ testimony, which shakes her to her core. In the process, she must confront her own judgments and presumptions.

In Saint-Omer, the unspoken court dynamic is always in play. Laurence is a Black lady who is surrounded by a largely white jury and audience. Regarding her and the offenses she has been accused of, presumptions have already been made.

However, Laurence’s advanced education and accent contradict the picture they desire to project of her. Rama recognizes these characteristics, but she realizes that there is something more peculiar at play.

The court reviews previously completed interviews and reports on Laurence’s childhood. On paper, perceptions seem black-and-white, but her responses demonstrate that life is far more complex than how people perceive a person from the outside.

The courtroom is filled with discussions of curses and witchcraft, reducing the patience of the prosecution. To her, though, this is not a joke. Spells, sadness, and neglect are a few of the possible explanations for why Laurence would kill her kid, whom she had cared for so well up until that moment.

Rama personally struggles with parenthood and sadness. She is expecting a child and has longstanding conflicts with her mother that have not been resolved.

The parallels between Laurence and the story of Medea in Rama’s work progressively plague the author behind closed doors. She won’t be able to simply wrap her arms around this one, especially as she considers her own reality.

Her training as a documentarian influences how she visually delivers the story. The majority of Saint-Omer is set in a courtroom with stationary characters.

The camera pans from side to side to capture the entirety of the space. Passing clouds intensify and dim lights, allowing Diop to manipulate brightness and gloom in novel ways.

Saint-Omer emphasizes its major performances with lengthy takes, allowing both the actors and the audience to become immersed in the film.

As Rama becomes increasingly aware of the shocking findings of the case and how they pertain to her own life, Kagame’s empathy for her grows.

In the part of Laurence, Malanga’s rapid-fire interactions with the court are nothing short of astonishing. Without ever speaking directly to one another, they put on a remarkable performance of looks and gestures.

In the courtroom, Diop’s story truly shines. There is a steady buildup to a number of notably poignant moments. Rama’s arc outside of the legal realm does not engage on the same level, resulting in jarring gaps in the story’s tempo. In other times, Saint-Omer is undeniably heavy-handed, such as when he watches Rama pull up a film adaption of Medea on her laptop, which is a clear contrast to Laurence’s crimes.

Nevertheless, there is undoubtedly plenty to love in Diop’s narrative feature picture debut, which exhibits a sensitive approach to filmmaking that engages the audience. Saint-Omer surpasses the traditional courtroom drama by posing challenging, unasked questions.