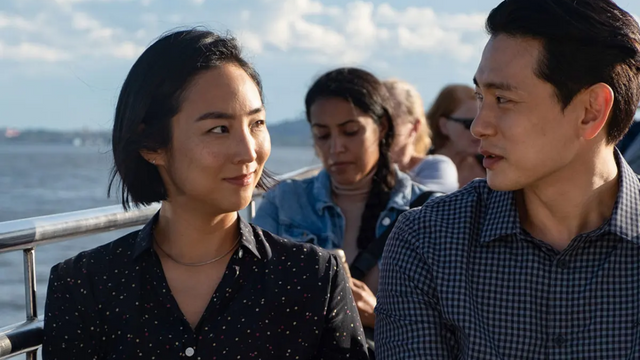 In “The Road Not Taken,” Robert Frost turns a simple decision into poetry. Most of us already know how the story ends, but he imagines going to that metaphorical crossroads to try the other path: “Yet, knowing that one path leads to another, I doubted I would ever return.”

In “Past Lives,” a beguiling examination of unrealized potential, playwright Celine Song creates poetry from a similar situation, but this time, it’s a series of choices from her personal life — some of which she made herself and others that were made for her by her parents — that leave us wondering what might have been.

Song, who was born in South Korea, drew on her own history and culture to create this genuinely exceptional debut film, a gem that is both heartbreakingly autobiographical and disarmingly universal.

Her script introduced the concept of “In-Yun” to Western audiences, presenting it as the universe’s method of reconnecting souls who shared a connection in past lifetimes.

This low-key A24 effort could be the spiritual reaction to last year’s “Everything, Everywhere, All at Once” due to its charming concept and careful execution. Whereas the film by Daniels adopted a confusing multiverse approach, “Past Lives” is straightforward, calm, and basic. Song’s characters may conjecture, but there is no turning back. Or is there something else?

Jeremy Renner broke over thirty bones in a snow plow accident and posted a photo of his physical therapy workout with the caption, “These Bones Will Get Stronger.”

“Past Lives” spans three distinct time periods and, like “Moonlight” (another A24 film), builds on childhood memories and relationships. In the first half, 12-year-old Na Young (Seung Ah Moon) abandons her first love by relocating from South Korea to Canada.

She has already chosen to become a writer when she grows up. Still, what could she possibly know about her future at that age? And what does she comprehend about what is being abandoned?

When the film leaps ahead a decade, we still haven’t fully gotten our bearings. The young man, Hae Sung, has matured. Now portrayed by Teo Yoo, he appears gorgeous but sad while doing his necessary military obligation in Korea. Na Young, now known as Nora (Greta Lee), has relocated once more, this time to New York City, where her studies have prepared her for a career as a playwright.

She discovers by happenstance — or is it In-Yun? — that Hae Sung has posted on her father’s Facebook page. Nora no longer identifies with the girl she once was, but she answers to Hae Sung’s message with a series of video conversations to catch up.

Almost as abruptly as she began these talks, she abruptly ends them. Now, twelve years later, Nora (still Lee) is married to Arthur (John Magaro), a fellow writer she met at an artists’ retreat.

Hae Sung has long ago vanished from her life until she discovers that he intends to spend a week in New York. The opening scene of “Past Lives” depicts Nora seated between Arthur and Hae Sung in a bar, thus it’s not surprising that this reunion has been the focus of “Past Lives” since the beginning.

This tension underpins the entire film and is finally addressed in a dialogue that captures us similarly to the walking-and-talking passages in “Before Sunrise” by Richard Linklater.

Ironically, “Past Lives” may be the antithesis of that film: It’s not about a spontaneous connection between strangers, but rather the power of tapping into a pre-established relationship with someone you knew a lifetime ago and with whom you appear to have unfinished business. Few films have illuminating interactions between men and women.

This aforementioned bar scene is particularly noteworthy, in part because Song has already given each of the three characters adequate attention. No one becomes angry; no one strikes out in jealousy.

Their husband of Nora has been studying Korean (in one of several unforgettable conversations, he explains that she relapses into her native tongue when talking in her sleep, and he wants to understand that hidden part of her). Hae Sung is able to communicate in English. But for the most part, the two men in Nora’s life are separated from the woman they love by a language barrier. And there she is, caught between what is and what might have been.

Using the same performers, Lee and Yoo, for the middle and later portions of Nora’s life may not have been the best idea. People in their early 20s have a beauty that is not yet fully formed, but the performers are too old to portray this.

This is where the music of Grizzly Bear partners Christopher Bear and Daniel Rosen is useful: During the sequences where Nora and Hae Sung are video conferencing, the soundtrack nearly brims with potential — a youthful sound, compared to later when strings tell of what they may have lost out on.

Given Song’s history as a writer, her reliance on silence — or the absence of speaking — may be surprising. Aided by DP Shabier Kirchner, she recognizes the visual potential of cinema, frequently privileging observation overhearing so that body language and surroundings (Seoul and New York play themselves) provide viewers with space to reflect.

When the characters do speak, they do it eloquently, as in the amusingly meta scene in which Arthur advises that Nora use what is happening in her work, and then analyses his part in the story.

Song has created a love triangle in the form of a circle, defying so many cliches in a manner that is softly terrible. Perhaps this is due to the fact that this ultra-personal undertaking is about a feeling other than passion, one that changes with time and permits a single life to encompass several loves.