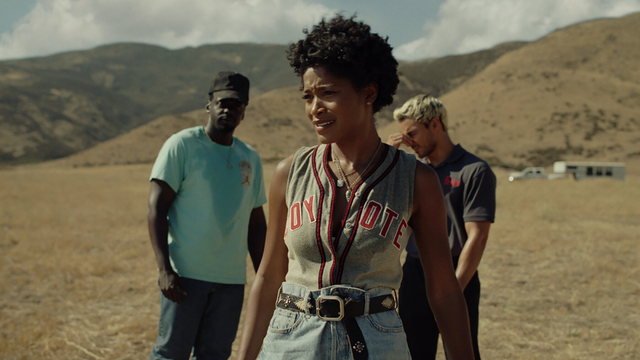 Aliens are no strangers to movies. From War of the Worlds and ET to Independence Day and Arrival, UFOs have frequently appeared on the big screen over the past seven decades, leaving filmmakers with the challenging dilemma of how to make a picture about aliens feel even vaguely innovative. Well, with Nope, Jordan Peele’s third feature (after Get Out and Us), the writer/director has responded in an outstanding manner.

It opens with a mysterious verse from the Bible: “I will cast disgusting dirt upon you, make you nasty, and make you a spectacle.”

The action will soon begin in Agua Dulce, southern California, where a Black family trains horses for use in Hollywood film, television, and advertising, but whose ranch has been shaken by a series of UFO sightings. OJ (Daniel Kaluuya) and Emerald (Keke Palmer) have polar-opposite personalities — she’s the carefree one who schmoozes clients, he’s the reticent animal handler — but they eventually develop a scheme to capture the saucer in the sky on film, with the assistance of gadget shop employee Angel (Brandon Perea).

ALSO CHECK: Rings of Power Review: Why Galadriel Did Not Tell Elrond About Halbrand?

As if that weren’t enough, a man named Jupe (Minari’s Steven Yeun) operates a fantastically tacky wild-west amusement park further down the Santa Clarita valley. His career was derailed when his co-star, a chimpanzee named Gordy, went on a killing rampage on set, which is presented in a flashback of pure, primitive terror.

Nonetheless, this is not an ordinary creature feature. Peele generates tension and fear by concealing his extraterrestrial in a manner reminiscent of Spielberg’s Jaws or M. Night Shyamalan’s Signs, but Nope is a far more cryptic horror film.

From inflatable tube guys waving in a desolate valley to blood pouring down on a house, the director continues to have a gift for crafting startling visuals, and many viewers will enjoy deciphering Nope’s symbolism and allusions to the question ‘what does it all mean?

Is the difficulty of recording the UFO a metaphor for the filmmaking process or a critique of technology-driven surveillance? Only Peele knows, but fans like their speculations.

Similarly, although the director’s tendency to tease by abruptly cutting away from the film’s most tense horror moments may annoy some, Peele enjoyably sprinkles MacGuffins and Easter eggs for film fans throughout, ranging from references to a three-second short film from 1878 to Daniel Kaluuya spending the climax wearing a hoodie made for the crew of the obscure 2002 The Mummy spin-off The Scorpion King.

And comic banter also punctuates the scares in a manner similar to Get Out and Us, with Nope’s title alluding to the characters’ response whenever they witness the horror before their eyes.

As OJ, Kaluuya exudes appealing charisma and coolness, while Palmer provides the film’s strongest source of cosmic energy. Together, they have excellent chemistry, while Steven Yeun gives nuance and sensitivity as the quietly troubled Jupe and Michael Wincott amusingly parodies artist clichés as a renowned cameraman recruited to help capture the monster.

Nope was shot on IMAX cameras by Interstellar and Dunkirk director of photography Hoyte Van Hoytema and is intended for the largest screen possible. Those wary of pretentiousness should know that ambiguity does not come at the expense of thrills, as Peele reaffirms his status as a director with both blockbuster pedigree and thought-provoking ideas. No matter how you view it, Nope delivers on the promise of spectacle made in its beginning.