Missing Review: Is the Missing Movie Based on a True Story? 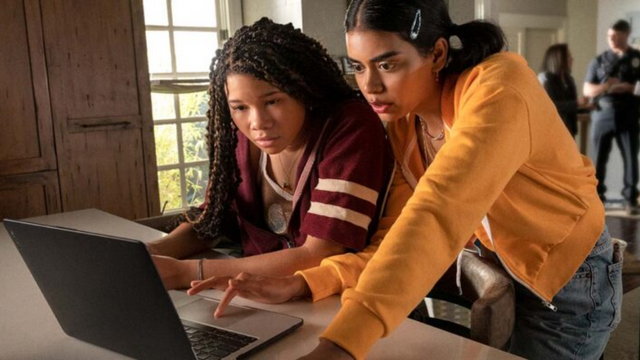 It’s difficult not to criticize “Missing” based on one’s own aptitude — much less hunger — for observing the world through electronics, yet doing so would be unfair to directors Nick Johnson and Will Merrick. In their directorial debuts, the two narrate the tangled tale of a teen’s hunt for her missing mother from a perspective that is perhaps the least visually fascinating possible and come close to making it cinematic in the process.

Nonetheless, an implausible escalation of events and numerous nagging concerns about who is doing what and how to make this screenlife thriller more effective on a small, portable scale than on a large screen.

June Allen, portrayed by Storm Reid, is a restless 18-year-old eager for her mother Grace (Nia Long) to embark on a romantic trip to Colombia with her new lover Kevin (Ken Leung).

June and Grace are separated since June’s father, James (Tim Griffin), passed away from cancer. In home-movie footage from June’s youth, James displays a comfort level with his daughter that his wife compensates for by being overprotective, a pattern that continues until Grace leaves U.S. airspace. However, when June arrives at the airport days later to pick up Grace and Kevin from their trip, they are inexplicably not on their return aircraft.

June files a missing persons report for Grace, but not before contacting their hotel, whose desk receptionist adds to June’s anxiety by informing her that Grace left all of her belongings behind.

June enlists her classmate Veena (Megan Suri), as well as Javi (Joaquim de Almeida), a courier she hires to help her chase leads in Colombia, in an attempt to discover Grace’s whereabouts. June either deduces or steals the passwords to her mother’s and Kevin’s online accounts.

June eventually discovers some intriguing conversations between Grace and Kevin from their early courtship, which she shares with the authorities. However, their combined efforts elicit more questions than answers, leaving the adolescent increasingly unsettled as she faces the likelihood of losing her sole remaining parent.

“Missing,” like its “cinematic universe” precursor “Searching,” serves as a frightening reminder of how much of our daily lives may be traced back to some kind of digital footprint.

Not only can she trace the movement of her mother’s phone up until the point of her disappearance, she can also watch Grace in Colombia via cameras (both live-streamed and recorded) installed at tourist destinations and track her spending using her bank account. It is debatable whether a frustrated but otherwise average Gen-Zer is capable of navigating all of these apps and programs with the same ease as June.

A few years ago, the scenario would have almost surely included a nerdy classmate to provide the essential expertise. It is difficult to determine if this represents development or filmmaker laziness.

Johnson and Merrick do a respectable, if inconsistent, job of blending June’s emotional journey with her amateur investigation’s cluttered desktop.

As irritating (and possibly believable) as it may be for a teenager to speak to virtually everyone around them while staring distantly into a phone or monitor, audiences become invested when she’s on screen, and even if Reid almost comically underplays a few crucial scenes along the way, seeing her is preferable to the too-many-open-tabs exposition that comes and goes at the filmmakers’ convenience, or desperation.

Unlike earlier screen life films like “Unfriended,” whose conceit is that the story is comprised of unfiltered “found footage,” there’s no reason that the film must be confined to a phone or computer monitor, especially since composer Julian Scherle provides a buzzing, fairly constant score to ratchet up the tension, and Johnson and Merrick freely cut to external angles when it serves their purposes.

But by adhering to the notion that as much of the action as possible should be delivered through June’s devices, the filmmaking duo undermines key payoffs by photographing them from dispassionate wide angles and then zooming in as if they were attempting to make the best of grainy surveillance footage.

Even if it provides no particular insights, the film touches on the contemporary phenomenon of amateur sleuthing, the influence of decades of “Dateline”-type shows on these would-be investigators (the one here, carried over from “Searching,” is called “Unfiction”), and the proliferation of callous, half-baked theories about ripped-from-the-headlines crimes on social media platforms.

“Missing” is ultimately so beholden to its central technological premise that audiences who take it at face value may become distracted by wondering how they’re seeing certain information and from whose perspective, rather than focusing on a sequence of events that’s increasingly implausible but should still prove riveting — at least as long as they don’t dig as deeply as June does.