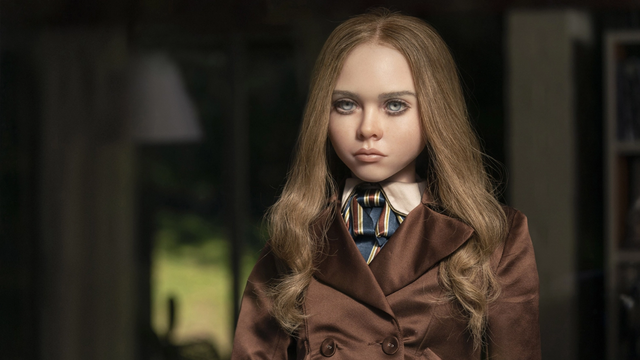 Gemma (Allison Williams) is a robotics engineer at a leading toy manufacturer. However, her boss (Ronny Chieng) is pressuring her to discover a way to manufacture their best-selling product at a lower cost.

In the meantime, Gemma devotes all of her resources to the creation of a lifelike doll that remotely mates with a primary user and serves as both best friend and guardian.

Cady (Violet McGraw), the niece of Gemma, sadly lost her parents in a violent car accident, leaving her as the lone survivor.

She abruptly moves in with her aunt, severely destabilizing both of their lives. M3GAN (Amie Donald, voiced by Jenna Davis) could be the solution to all of their issues, or it could exacerbate the situation.

Cooper’s screenplay instantly establishes the tone of M3GAN with an over-the-top toy advertisement designed to attract youngsters that inevitably irritates the living daylights out of their parents. Gemma and Cady come from very different worlds, but both of their lives are on the verge of collapsing due to the technology they revere.

The work that goes into manufacturing the ultra-durable M3GAN may appear to be a futuristic marvel, but is it? The present-day film by Johnstone depicts the market’s internal conflict over whether to seek technological advancement or to produce the most affordable and accessible toy.

Cady’s family life is average, and she uses technology to keep her mind active. However, when she moves in with Gemma, who has a plethora of her own peculiarities, her limit on screen time is immediately thrown out the window.

She is an adult with an inner child that makes her passionate, if not obsessive, about particular toys. As technology evolves from a mere diversion to a full-time babysitter, M3GAN will soon be at the top of that list.

However, M3GAN is about more than an out-of-control doll. It refuses to turn away from the fact that Cady’s parents have died.

She currently resides with an estranged aunt as both of their worlds teeter on the edge of catastrophic catastrophe.

Trauma permeates every connection, which extends to Cady’s friendship with M3GAN. Obviously, it becomes a weapon used to further divide the aunt and niece. This killer doll becomes both psychologically and physically dangerous.

M3GAN’s killer hook is the dark comedy that dominated the Internet and turned the film into a worldwide phenomenon.

She is the doll that sings, dances, and kills in multiple ways. “Titanium” by Sia is one of a handful of songs that will re-enter popular culture.

It all adds up to something strange and unpleasant, yet utterly entertaining. Drama is the lightest of the film’s tones, but it hits all the necessary notes.

Similar to Cooper and Wan’s Malignant, M3GAN relies on an absurdly bizarre riff and leans towards it.

Some of the story’s craziest moments rip holes in the plot and character motivations, but what does that matter for a horror film whose sole objective is to elicit reactions to its set pieces?

It is important to note that the film’s PG-13 rating prevents any bloody hijinks. Those seeking the next prison scene from Malignant will not find it in Cooper and Wan’s follow-up, but killings are not the emphasis of this film.

M3GAN is more of a thrilling dark comedy than a horror picture, bursting into a hysterical laughter fest that strikes the perfect mix between comedy and drama.

Similar to the Child’s Play franchise, there is no limit to where this plot may go if the producers decide to bring back this fun journey. It could have pushed its boundaries further, but it is still a really entertaining genre film.

Our website show you more imformation about celebrity. If you want to find out more about check out our website.