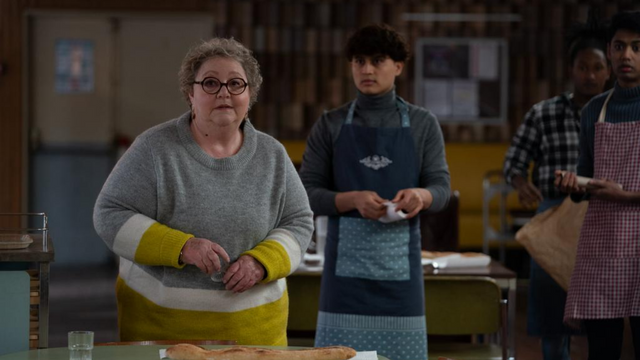 The seething pandemonium and brutally thrown insults of reality shows such as “Top Chef” and “Kitchen Nightmares” are happily absent from “Kitchen Brigade,” in which a talented chef trains eager amateurs with quiet hauteur, exacting shallot-slicing demands, and eventually a dash of gentleness.

In the charming social drama directed by Louis-Julien Petit, the stakes are also higher: These young apprentices are not honing their abilities to remain in a competition, but rather to remain in the nation, as they face deportation if they are unable to gain the necessary skills. The cruelties of the French immigration system leave a bitter aftertaste to Petit’s otherwise cheery feel-good film, a fairly palatable production that cannot entirely avoid the white-savior trope in its rushed conclusion.

Turning to the topical issue of the European migrant crisis, “Kitchen Brigade” continues in the tradition of earlier films, luring audiences in with dry character humor before striking them with weightier issues; although, an eleventh-hour flourish of reality TV parody is marginally less believable. This week, the picture was simultaneously released in theatres and on-demand in the United States. It should appeal to lovers of crowd-pleasers like “The Intouchables,” whose actor, Francois Cluzet, has a supporting role here.

In the lead role, though, it’s character actor Audrey Lamy’s (also the star of Petit’s “Invisibles”) snappy, somewhat salty screen presence that gives “Kitchen Brigade” its welcome sting. She portrays Cathy-Marie, a brilliant but obstinate gastro-maestro who is tired of working as Lyna’s (Chloé Astor) sous chef and the Gordon Ramsay-like host of a television cooking competition. When they clash over the seasoning of Cathy-specialty Marie’s beet dish — in what may be the most Gallic quarrel ever depicted on film, one prefers balsamic while the other insists on hibiscus — the hot-headed deputy departs, only to discover that comparable culinary jobs are scarce.

An employment offer from a self-described “charming eatery” turns out to be the drab cafeteria of a migrant hostel supervised by jaded humanitarian Lorenzo (Cluzet). Cathy-Marie, appalled but resigned, prepares the canned ravioli preferred by the institution’s predominantly African and South Asian residents, before drawing up a more ambitious menu that can only be executed with the assistance of these unskilled but enterprising young migrants, many of whom bring their own culinary traditions to the table. Cathy-brittle Marie’s elitism quickly transforms into a warmer attitude of collaboration and care for these vulnerable adolescents, and she devises a high-risk plan to safeguard their futures.

It’s primarily quick-witted and humorous, with nice but unobtrusive craft contributions: DP David Chambille sensibly refrains from going to with the gastro-porn lensing, albeit a massive lamb roast paraded through the dining hall, preceded by smoking rosemary branches, virtually floats out of the frame.

MUST READ: Skinamarink Review: In This Spooky Horror Experiment Two Youngsters Are Locked in a Shape-shifting Home

Petit’s script (co-written with Liza Benguigui, Sophie Bensadoun, and Thomas Pujol) paints the characters of Cathy-proteges Marie’s in superficial shorthand. Cathy-proteges Marie’s are performed boisterously by a bright young ensemble, and they are universally winning. Their collective backstories are presented in a single tear-jerking montage, whereas our French protagonist is given a greater number of internal difficulties to contend with. It is a common blunder in well-intentioned but ultimately Western-oriented films of this kind, albeit a fairly abruptly introduced conclusion partially makes up for it for the children, with the head cook purposefully fading into the background as her charges take center stage.

Is the Kitchen Brigade based on real events?

The Kitchen Brigade, which is loosely based on a true story, has an episodic format, and its concluding sequences are rushed. This is unfortunate because the film’s beginning treatment of contemporary subjects such as social justice, refugees, and immigration held great promise.

How significant is the kitchen brigade?

The objective of the kitchen brigade was to ensure that each cook had a distinct role and that the kitchen operated at peak efficiency. Supply chain efficiencies and technological advancements have rendered obsolete a significant portion of the traditional kitchen staff responsibilities.