Kindred Review: What Happens at the End of the Story? 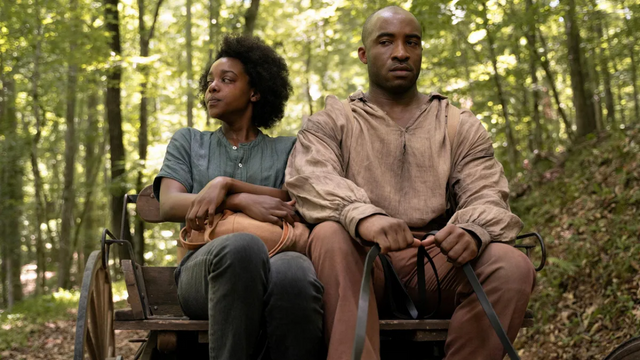 It is difficult to call FX’s new series Kindred an adaptation of Octavia E. Butler’s 1979 novel of the same name, which won the Hugo Award. The story of a Black lady, Mallori Johnson’s Dana, who is abruptly taken back through time to a pre-Civil War farm follows a similar fundamental premise.

However, from a narrative and thematic standpoint, there is a succession of dramatic alterations that fundamentally alter and increasingly weaken her story’s many deep nuances.

While all adaptations involve alterations, the ones being made here are, at best, superficial and, at worst, pointless. Though Johnson’s devoted performance is a high point and Janicza Bravo’s early direction draws you in, both are ultimately undermined by a plot that cannot hope to come close to what Butler accomplished all those years ago.

Timing is the first of many alterations to be made. In contrast to the novel, which is set in 1976 and immediately establishes the gravity of the situation, the series opens in a completely different manner in the present day.

While this concentration on the present is not wholly unexpected, since many adaptations feel the need to be more immediate, it rarely offers anything novel. Here we find Dana in the aftermath of one of her several time travels jumps.

She is gravely hurt and laying on the floor at a property she recently purchased, where she is alone. Soon, police lights begin to flicker outside as she attempts to send an email despite having poor Wi-Fi. Officers attempt to forcibly enter Dana’s home despite her assurances that she is okay after a nosy neighbor peer in through the window. Clearly, they do not listen.

While this introduction and much of the first episode are well-directed by Bravo, this is simply the beginning of a series that tells a drastically different story and lacks Butler’s original incisiveness.

Then, we find Dana laughing and watching television on the same laptop that, unbeknownst to her, will be her lifeline throughout the impending crisis. While she had previously shouted out for assistance, she is now alone and uncaring before hurrying off to a forgotten meal. Dana has only recently relocated back to Los Angeles and aims to break into television writing; she is excited about this transition.

She then attends a celebratory dinner during which she briefs her aunt Denise (Eisely Davis) on all of these big life developments. Denise’s husband Alan (Charles Parnell) soon expresses his displeasure with her life choices, and the situation deteriorates.

It is tight, but Dana has lost both of her parents, so they are the only family she has left. When Dana attempts to leave, she sees Kevin (Micah Stock), a waiter at the restaurant. In this version, the white man who was her husband when we originally met him in the book becomes a stranger.

Dana accepts his offer despite the fact that her phone is dead and she cannot summon a ride service. Later that night, she matches with him on this universe’s version of Tinder, where he immediately begins sending her cheesy messages.

The two then engage in a courtship that is frequently awkward and lacks the novel’s complex past. In the middle of this, they suddenly find themselves in the precarious situation of being transported back in time.

The only apparent source of this event is a young white boy named Rufus Weylin (David Alexander Kaplan) who confronts danger. Dana always returns in the midst of his pain, whether he is a baby nearly suffocating in his bed or a few years later nearly drowning in a bathtub. Kevin is the only person who witnesses this, and he is subsequently sent back in time with her. There, days can pass that would only be hours in the present, from which they have torn away. Then, they must comply in order to survive.

When both are placed in the past, the series begins to falter significantly. The fundamental reason for this is that just around one hundred pages of the novel are covered in the first eight episodes. While this is partially how new narratives are introduced, it feels as if the story’s solid base has been strained to the breaking point.

There is none of the interiority and care that Butler gave to her characters, despite the fact that the world is still viewed through Dana’s eyes. It continues to be a piece that is both more concentrated and more human than anything else on display. The canvas over which the story unfolds is considerably more dispersed, causing many of the most remarkable elements to be lost.

In contrast to the book, which was written in the first-person, the show focuses on other characters in the past and present when Dana is absent. In the past, much more time is spent with Kevin as he bumbles through the regulations of the plantation while being mostly immune to danger as a white man.

He still manages to find ways to mess things up, such as when he makes a reference to a Jane Austen novel he should not have known about, a gag that feels out of place despite being played for laughs. The series represents the same themes as Butler’s depiction of Kevin’s ignorance of the circumstances Dana experiences on a daily basis, but it lacks the same significance because this is a man Dana has just met.

The fact that they are written to be such strangers to one another diminishes the sharpness of the story’s insights. In the story, there is a more disquieting undercurrent, as Dana frequently feels that Kevin, the man she still loves and knows intimately, could turn into someone she must fear as much as the other white people who rule the plantation.

It produces a more complex depiction of evil in which individuals who cause harm are monstrous yet all too human in their malice. All of this is lost in the series, which shows him as a well-intentioned, uncomplicatedly friendly guy devoid of larger subtlety or complexities. This is not Stock’s fault; rather, it is the result of how his character and the plot are structured.

There is no greater involvement in Kevin and Dana’s romantic relationship when it is presented in such a straightforward manner. All of Butler’s attempts to examine gender, ethnicity, and power via the prism of a time travel novel are completely abandoned in favor of a considerably more conventional tale devoid of depth.

It concentrates instead on Dana attempting to determine what to do with a familial tie she has to the plantation that differs from the one she had in the novel.

Theoretically, this inclusion is intriguing, with a few more complex exchanges that are captivating; nonetheless, it is overshadowed by the rest of the story’s superficiality. It ends up attempting to incorporate more detail, only to communicate something with far less significance. The series drifts further and further from Butler’s more complex works until there is just a faint sense that this is her story.

This entire situation feels primarily like a squandered opportunity. Some of the passages from the novel that keeps popping up when viewing the Kindred series pertain to the nature of television.

Several times early in the story, Butler illustrates how Dana is processing what she saw and experienced and how significantly it varies from what she has seen on television.

All actual violence feels more palpable than any depiction ever could on screen. Another difference from the novel is that Dana in this story aspires to be a television writer, which may have set up a storyline that dealt with these concepts in a creative way. Instead, the major flaw of the series is that it resembles the television programs that Butler mentioned in her work.

Whereas the novel’s characters and universe possessed depth, the adaptation’s characters and setting are significantly more conventional. It loses sight of the viewpoint, power, and poetry of Butler’s original story in favor of one that is thematically much thinner and contains no new elements.

The few glimpses of its best concepts are those that remain from the source material. Even when the acting and direction strive for something greater, the film constantly falls short due to its mediocre framework.

The one redeeming quality is that it may encourage more people to reread Butler’s novel, but this is hardly a compliment to the first season of this adaptation.

Kindred may be able to explore more in a second season, as there is still much of the book remaining, but if it continues to frame the plot in the same way, it will continue to encounter many of the same issues. By the time an unusually open-ended finale is reached, it is evident that the most significant elements of the series were already executed with greater care and precision in Butler’s hands.