High Heat Review: Who is the Killer on High Heat? 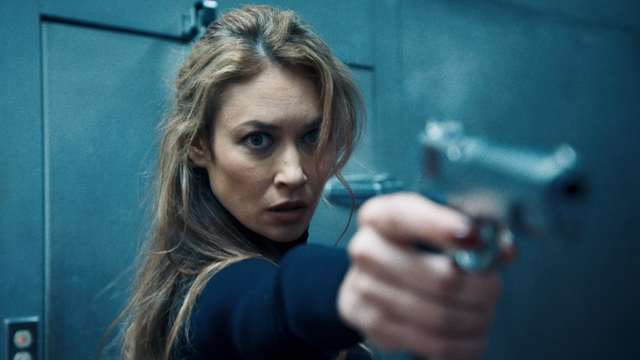 The film is immediately captivating, with composer Max Di Carlo’s sprightly opening theme complementing a colorfully vintage credits sequence (by Danny Oakley and Out of Our Minds Studios) that makes it bearable to suffer through an endless list of executive producers.

From there, we’re thrust into the barely controlled kitchen turmoil on opening night at Etoile Rouge, where chef and co-owner Ana Abramov (Olga Kurylenko) is issuing directives with the authority (but perhaps less abrasiveness) of Gordon Ramsay.

Ray, Ana’s husband, and business partner are portrayed by Don Johnson in silver-fox style. He greets diners with a dazzling smile, gracious charm, and a hearty Bon appétit!

The big opening is well on its way to being a huge success until Mick (Ivan Martin) arrives. Mick is the underachieving and overcompensating son of Dom (Dallas Page), a gangster who invested in Ray’s previous restaurant attempts, none of which were profitable.

This time, Dom has developed a scheme to secure a speedy return on the $1.3 million he borrowed Ray to fund Etoile Rouge — namely, he plans to burn down the establishment to collect the insurance money.

Naturally, Ray hasn’t mentioned his demanding investor to Ana, who, interestingly, doesn’t appear to have ever asked her husband where he obtained the seed capital to help her realize her long-held dream of building a world-class restaurant.

Nevertheless, don’t all husbands and wives conceal secrets from one another? Ana has a quite convenient skeleton in her closet, as it turns out She is a retired KGB operative who was trained to inflict severe bodily injury using everything from automatic weaponry to handfuls of celery.

Mick and Don have a vantage point in a parking garage across the street; the more they send subordinates to commit arson and other crimes at the Etoile Rouge, the higher the body count rises.

Assuredly, though, there are a number of amusing moments in between (and, very often, during) the tense moments.

Dom makes no secret of his severe disappointment in his son: “This wasn’t meant to be difficult, Mick! I sent you to handle it because of this!” — and must stifle his rage while haggling over overtime fees with the chief of freelance assassins.

Ana and Ray still find time to quarrel like a traditional married couple despite fending off numerous attacks on their eatery.

She: “No wonder you’ve gotten divorced twice!” “That’s a bit below the belt, wouldn’t you say?” Despite this, Ray insists he will stand by his girlfriend despite his flaws. And also their eatery. “About 65 percent of waitstaff leave throughout their shift,” he claims. “I will not join their ranks.

They bring their “Shining”-spooky twin daughters (Bianca D’Ambrosio and Chiara D’Ambrosio) with them when they go to the Etoile Rouge to reinforce and/or kill Ana, because the last time they left the girls alone, they hosted an unsupervised party.

It would be unjust to reveal the outcomes for any of the aforementioned characters, including Gary (Jackie Long), an expert masseuse who is understandably frightened when caught in the crossfire.

So let’s keep things as they are: “High Heat” is a film in which nearly everyone receives their just desserts. With the possible exception of a person who makes a snide comment about Ana and Ray’s obvious age gap. This individual receives a relatively light sentence.