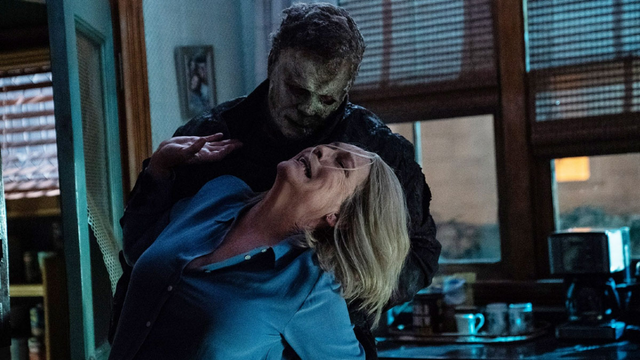 Laurie resides with her granddaughter Allyson (Andi Matichak) four years after the events of Halloween Kills and has reportedly found peace.

She is currently writing a memoir on her trip and struggle for survival, but Myers has never been located. Laurie determined that she has let her fear of him to dictate her life for far too long and had now chosen a new course.

A local nanny named Corey Cunningham (Rohan Campbell) is accused of accidentally killing a young boy. Therefore, the town of Haddonfield requires a new bogeyman to fear. Myers, however, continues to lurk in the shadows and is not yet through rampaging through the village.

Halloween Ends depicts how Myers’ rampage on Halloween night 2019 damaged the tranquility of the community. As a result of the veiled dread, children pee in bed, talk in their sleep, and have a profound fear of the night.

After four years, the Myers residence is no longer standing, but the town is still attempting to recover. They remain concerned that the savage assailant could be hiding someplace and poised to attack. The death of a young kid under Corey’s supervision reignites their dread and focuses their fury in a new direction.

ALSO CHECK: The School for Good and Evil Movie Review: Who is Sophie’s Genuine Love in School of Good and Evil?

Laurie gives the impression of having moved on, but the prior assaults continue to weigh heavily on her. However, the memoir serves as therapy and an outlet for her. Meanwhile, Allyson is completely unaffected by the destruction.

In fact, Karen’s (Judy Greer) unceremonious death at the conclusion of Halloween Kills is barely noted. Laurie has a picture of her baby as the wallpaper on her phone, but that is the only evidence that she ever existed.

Halloween Ends includes a new babysitting protagonist, but in contrast to Laurie and her high school friends in 1978 original, he is not viewed as an innocent child. Allyson starts a relationship with him, placing the Strode family in an even more contentious position in Haddonfield.

The city is hunting for a person to hate, revealing on numerous levels the power of unrestrained evil to spread. Laurie, Allyson, and Corey are social misfits to varying degrees, yet their neighbors use their anguish and trauma as a weapon against them.

Green assumes audiences have not seen the two prior installments and provides a comprehensive recap to catch them up.

Halloween Ends takes bold steps that propel the franchise into new territory, giving it a unique taste. However, the third chapter promises a confrontation between Laurie and Myers, but it is pushed aside for Corey’s intolerable narration.

It is too late to shift gears so abruptly without rendering the voyage monotonous. This new character consumes much of the screen time and places its emphasis in the incorrect locations.

Green suddenly abandons the terror he built in his two previous films in favor of doubling down on the unsuccessful humor that was once merely a garnish. These moments were unsuccessful in the prior two entries, and they are even less successful here.

Green’s climax entirely abandons any sense of dread or suspense, failing to include any of the Halloween tropes that readers need.

There are no chase or stalking scenes, and many of the deaths occur off-screen or are disguised physically. John Carpenter’s masterful score continues to rock with full intensity, yet it is the only fundamental Halloween aspect that remains intact.

The Shape is more than a stalker killer in this context; it is a metaphor for the contamination of evil. It provides an insightful glimpse into the ambiguity behind the widespread fear of the monster.

However, this franchise edition lacks atmosphere, as it attempts to replace style with numerous ineffective out-of-context references and visual clues to past installments.

Several elements of an epic conclusion are present, but we are left with a lackluster, anticlimactic conclusion that disregards Laurie and Myers as undeserving of their own story. Halloween Ends is an abhorrent disappointment that displays clear disregard for both its audience and its characters.