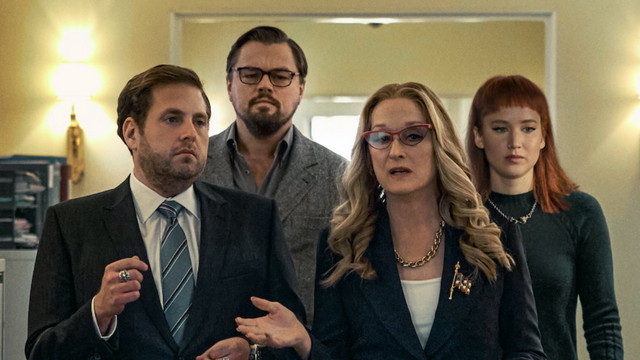 Don’t Look Up is a highly enjoyable guilty pleasure film with an underlying message. Adam McKay enlists a large ensemble cast, headlined by Leonardo DiCaprio and Jennifer Lawrence, for his climate change social satire film. Don’t Look Up takes on a bit more than it can chew, but its expansive scope and rambling plot provide a certain pleasure.

When she detects a comet, Kate Dibiasky (Lawrence) is a Ph.D. candidate working under Dr. Randall Mindy (DiCaprio). As soon as they realize it’s on a direct course toward Earth, the initial joy is replaced by absolute panic.

They are low-level astronomers who are rapidly overburdened with the responsibility of informing President Janie Orlean (Meryl Streep) and her son and Chief of Staff, Jason, about the discovery (Jonah Hill). Their pleadings, however, fall on deaf ears.

Astronomers predict that the comet will strike Earth in six months and fourteen days. They embarked on a publicity tour to warn the world about the approaching comet.

However, their media appearances complicate matters further, as people are more worried about pop singer Riley Bina’s (Ariana Grande) separation from DJ Chello (Kid Cudi) than the possibility of a comet destroying the earth.

McKay crams as many celebrities as possible into Don’t Look Up, yet the film has a purpose. His screenplay addresses the climate catastrophe in the context of the age of social media.

McKay’s decision to recruit a collection of A-listers is a blatant attempt at self-deprecation. Don’t Look Up is a satire on the politicized scientific discussion, but it is not hesitant to poke fun at itself.

Randall and Kate are polar opposites in many respects, but they frequently feel like passive characters who are magnets for the story’s tornado of craziness.

They encounter a president inspired by Donald Trump and her son who has no place in the position he has, as well as television personalities Brie Evantee (Cate Blanchett) and Jack Bremmer (Tyler Perry) who are parodies of news reporters who value flair over substance. The media’s polarised response to Randall and Kate speaks volumes about sexism in the media.

Don’t Look Up talks about the politicization of science. McKay’s film is a satire on the climate problem, but it also fits perfectly into the coronavirus (COVID-19) pandemic discussion. In such debates, each character appears to represent different portions of the population, resulting in a packed yet amusing roller coaster ride.

The big and amazing cast of Don’t Look Up will garner a great deal of attention. DiCaprio stands out because he assumes the character’s whole physical appearance. However, Lawrence, Streep, and Hill have the strongest chemistry in the film, despite the wild improv. The picture has a considerable shift in tone that is not totally successful, especially when the number of jokes continues to diminish. Regardless, there is not a single minute of boredom.

Don’t Look Up is an extremely time-specific film. It reveals a revolting aspect of humanity, especially when the divisive element of politics is added to the discussion.

Occasionally, McKay’s screenplay makes you doubt if you want the planet to be destroyed by the comet. However, the film consistently delivers enough glimpses of humanity’s potential for good to convince viewers that humanity may be worth fighting for.

The newest film by McKay is seldom laugh-out-loud humorous and makes many obvious satirical points. Fortunately, it contains sufficient humorous elements. Its 138-minute runtime passes fast because Don’t Look Up never pauses for a breath.

Climate catastrophe is a difficult topic to convey in a concise narrative. McKay’s comedy notes are a tad too predictable, and his dramatic moments don’t always land, but the film is still quite entertaining.