Dog Gone Movie Review: A Film for Dog Lovers and Those Looking for Feel-good Family Dramas 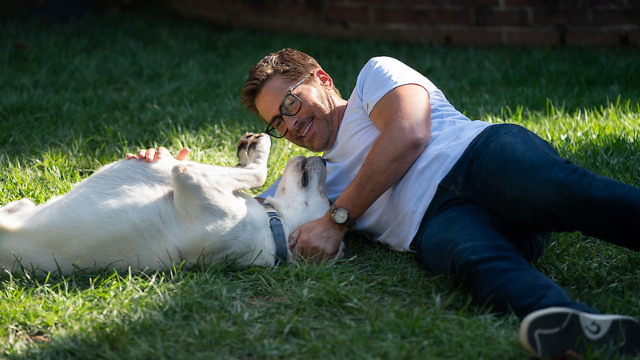 It’s a given that everyone enjoys seeing films about dogs. Dogs make for some of the most endearing and cheeriest heroes. Dog Gone embraces this concept by telling the story of Fielding Marshall and his cute dog, Jonker, in a way that is both straightforward and ultimately heartwarming. The movie is based on a true story and centers on them, along with Fielding’s parents John and Ginny.

They put in a lot of effort to track down Jonker after he mysteriously disappears one day. While Fielding and John go off to look for him along the Appalachian Trail, Ginny is in charge of spreading the story back at home. It’s also an opportunity for Fielding and his father to mend their strained relationship and spend quality time together.

It’s safe to say that Dog Gone succeeds as a feel-good family drama. They do a good job of setting the stage so that when Jonker actually disappears, the sense of urgency is palpable.

The Marshalls’ devotion to their pet dog is clear. What’s more, it’s nice to see such a massive outpouring of support from regular people. The plot, however, is ultimately a straightforward one that does not go into any subtleties or complexity.

The movie doesn’t try any harder than it has to with its themes or emotions. The development of the father-son relationship is formulaic and superficial. Fielding suffers from stomach pains for no apparent reason, but the prolonged mystery is ultimately unconvincing. Ginny’s experience growing up with a pet dog is the focus of a full episode.

However, the flashbacks have a strange hue and tone that don’t fit the rest of the plot. Even though they intended to make a point about Ginny’s increasing anxiety and pressure, the effect is weak. Find your happiness with this light and enjoyable film. Keep gazing around if you want to engage your brain.

However, the problem with factual stories is that they can’t be denied as being realistic. This is to say that they don’t have the standard plot devices like a climactic confrontation between father and son or a resolution of long-standing tensions between them over the course of three acts. Real-life stories are never neat and tidy, and they rarely have happy endings.

Suitable for all ages, Dog Gone is a pleasant experience for the whole family. The film is a normal family drama that doesn’t delve any more than necessary into the true incident, as is evident from the trailers.

The truth, meanwhile, is much more brutal and gripping. In reality, Fielding was a much older man who had recently lost his newborn child and whose spouse had left him shortly thereafter. As a means of dealing with his loss, he took in Jonker, who became his closest companion.

Because of this, he was already well into adulthood by the time he and his father set out on their epic quest. An older man’s reconciliation with his father is far more compelling to me than the redemption of a wayward youth (c’mon, that tale has already been told) any day.

There was genuine depth and complexity in the original, but the Netflix version is essentially a lighthearted dog movie. There’s certainly nothing inherently wrong with movies of this genre, but if you’re going to adapt a true story, you shouldn’t leave out what makes it so meaningful.

Do we know if Dog Gone is based on a genuine story?

Based on a true story, Dog Gone follows a father and son on their search for the family dog, Jonker. Meet the model good boy who sparked the idea for the film.

There was no mention of the dog until season 2, although Schnapp revealed that a grave for Chester was built for season 3.