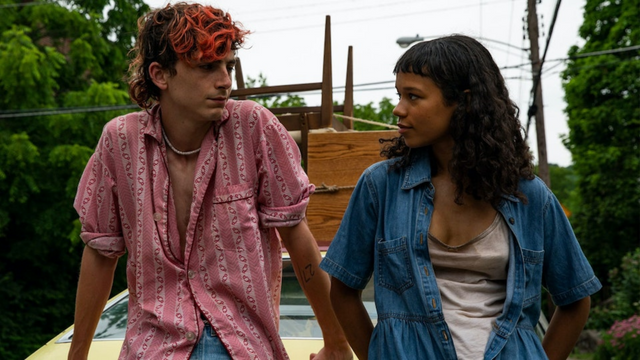 Filmmaker Luca Guadagnino is a master of subtle dramatic narrative that slowly, but surely, hooks the viewer’s attention.

A Bigger Splash, Call Me by Your Name, and Suspiria are only a few instances of his ability to weave large theoretical concerns into hazardous storylines that radically violate norms. Bones and All does not approach the heights of his most substantial works, yet it continues to employ great creativity in addressing important issues.

Young woman Maren (Taylor Russell) lives alone with her father (André Holland). They learn to live with their heads bowed low due to her uncontrollable thirst for human flesh.

However, he abruptly departs one day and never returns, leaving her to fend for herself as an “eater” with no other option than to continue advancing and surviving.

Along the trip, Maren encounters Lee (Timothée Chalamet), a fellow eater who also travels alone. As they live on the fringes of civilization, they build a close bond and gradually develop trust in one another. The deeper Maren and Lee’s relationship progresses, the more they question their existence and how to live their lives.

Maren and her father strive for a semblance of normalcy despite Maren’s occasionally brutal acts of consuming. Bones and All discovers them at the end of a seemingly endless cycle of changing names and residences each time she consumes human flesh.

Maren desires to make more friends at school, but a sleepover gone awry deprives her of her father and mother, whose identities have been concealed from her for her whole life. With nowhere else to turn and no one to rely on, she sets her sights on locating her mother in an effort to find love and discover why she is the way she is.

Through a cassette recorder that her father left for her, Bones and All relates Maren’s story, detailing why he left and the experiences of their voyage that she cannot recollect. As a result, she lacks a meaningful understanding of home and family.

Maren encounters a menacing and malevolent guy named Sully (Mark Rylance), who instructs her on how to utilize her sharp senses to detect other eaters and possible human prey. Other than the fact that he is a cannibal, he appears to provide her with solace, company, and guidance; nonetheless, there is something odd about him.

Lee adds a new type of eater into Maren’s life, and she feels at ease in his presence. Their blossoming relationship creates a new definition of “home” for her, which is wherever they are together. Lee is more cognizant of the significance of family, although he maintains a distance from them.

The couple is ashamed of how people perceive them since they are constantly fleeing from something, including themselves. Bones and All is the narrative of two outsiders who are perpetually on the run from trauma, encountering other frightening travelers with the same survival and nourishment goals.

Guadagnino’s venture into the macabre was not limited to Suspiria. In his picture about cannibals on a road trip, he employs the full force of his audio department to imbue the most stomach-churning scenes with gruesome sound effects.

It discusses both the real and metaphorical characteristics of a monster. In the screenplay by David Kajganich, the spectator must accept both the good and the evil. Despite their cannibalistic tendencies, it would be a mistake to disregard their compassion.

Russell demonstrates her range as an actress by letting her expression, rather than her words, to convey emotion.

In every frame, her sadness and feelings of abandonment are palpable, but when she interacts with Lee, the audience gets glimpses of happiness in her eyes.

Meanwhile, Chalamet’s performance is equally nuanced, displaying the dynamic emotion that fans have come to expect from him at just the appropriate times. Meanwhile, Rylance’s Sully exists on a completely separate level. He generates the film’s most stressful moments by being campy, crazy, and horrifyingly repulsive.

The screenplay by Kajganich and the direction by Guadagnino skillfully explore the isolation of individuals living on the fringes of our society. However, Bones and All contains two components: one part cannibal thriller and one part coming-of-age road trip.

Rather of complementing one another, they frequently step on one another’s toes. LGBTQ themes are pervasive, with some blossoming happily and others feeling suspect.

In contrast to Guadagnino’s approach in Call Me by Your Name, the relationship is stifled here, significantly decreasing its emotional impact. Meanwhile, the suspense element feels undercooked.

That is not to argue that there aren’t times when both components succeed independently. A few remarkably emotional moments between Maren and Lee reflect the film’s fundamental themes. In addition, some of the strange characters they encounter along the road produce situations that will make you squirm.

Bones and All approaches its roaming social outcasts with a combination of calm and violence. However, it has a chilly quality that keeps the audience at arm’s length, never quite achieving the emotional heights it aims for. It raises intriguing social problems regarding pariah survival in American culture.

Where to Watch Bones and All Movie