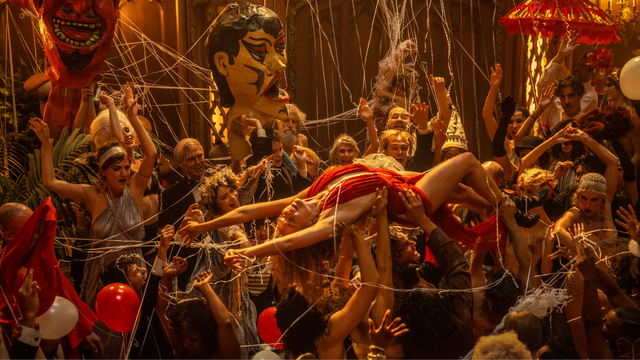 Babylon depicts Hollywood entering a transitional time with the introduction of sound, or “talkies,” in the booming 1920s.

However, silent film star Jack Conrad (Brad Pitt) continues to indulge in his lavish lifestyle on a daily basis. He is constantly pursuing his notion of the ideal woman while attempting to continue gaining professional success.

In the meantime, Babylon also adopts the perspectives of individuals who aspire to work in Hollywood. Nellie LaRoy (Margot Robbie) is an aspiring actress determined to do anything to prove her abilities to the world.

Manny Torres (Diego Calva) is an assistant to powerful Hollywood figures, but he aspires to work in the film industry in order to be a part of something better.

Chazelle incorporates an excess of partying, nudity, drugs, and body fluids into Babylon. He places the story in an era when Hollywood had fewer restrictions and everyone wanted to be engaged in the festivities.

Nellie boasts to Manny that she is already a member of the group, claiming that one is either born a star or not. She feels in her bones that she is destined for something better, which inspires Manny with the same fire.

Even though the industry stinks, Chazelle immerses the audience in a personal passion for filmmaking that serves as the beating heart at the center of the raucous hijinks.

Many of the film’s dazzling moments are the result of the magic of filmmaking. Occasionally it manifests as frenzied turmoil and other times as calm sensitivity. Chazelle takes us through a day’s worth of zany shenanigans on a movie set.

The significance of sunshine and time as currencies in this enterprise is maintained, while the chaos that ensues is used for comic effect.

The narrative interweaves characters that are composites of historical Hollywood celebrities with references to well-known actors, such as Gloria Swanson. The screenplay hinges on the viewer identifying with the author’s affection for the film as an artistic medium and his critique of the machine that sells it.

Babylon weaves multiple rise-and-fall arcs into its plot, with some characters enduring multiple cycles. However, gender politics enter the picture. The label “crazy child” is given to Nellie, establishing a blatant double standard between men and women.

Unfortunately, it isn’t all that different from modern misogyny in the industry, but Chazelle delves more into the lingering damage it has on the seemingly untouchable stars who transcend human frailty in the quieter chats she has with Manny.

The majority of Babylon’s runtime is spent at full speed, providing a dizzying experience that is undeniably chaotic and disorganized, but editor Tom Cross weaves all of the moving parts into a powerful whole.

The amazing score by Justin Hurwitz is an unforgettable wall of music that enhances the adventure. Chazelle borrows heavily from Singin’ in the Rain, La Dolce Vita, Boogie Nights, and The Wolf of Wall Street, even replicating moments with a modern, sleazy spin. Their inclusion creates a unique message, although its impact may vary depending on the context.

In the film’s few quiet moments, Chazelle exhibits sincerity and vulnerability. Hollywood has always been a revolving door for talent, but this picture contains a number of tender truths that are especially pertinent to this key era in film history when sound transformed everything.

However, they are still relevant today and will continue to be so in the future. Chazelle created La La Land for dreaming fools, but he created Babylon to illustrate the repercussions of dreaming.

Chazelle does not, however, take himself too seriously. He successfully identifies dramatic sequences worth pausing for, as well as comedic beats that land.

Robbie goes all out, delivering spectacularly on the scene’s most prominent jokes, in a performance that leaves nothing to chance. However, Calva is an absolute knockout in a star-making performance that will make him a must-watch.

Babylon is a bold Hollywood epic that shakes the senses to the core. Chazelle lacks restraint and throws everything at the wall, but unexpectedly, a surprising amount of it soars. As is the case with the narrative, the runtime of this hedonistic extravaganza is a touch excessive, but there is no doubt that it can bring the house down.